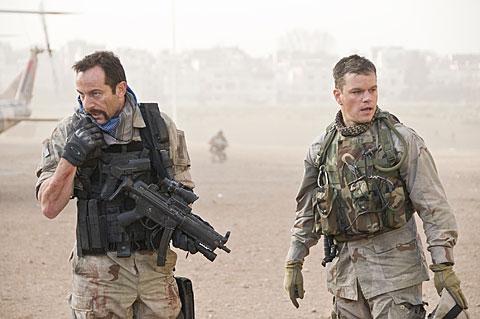 Jason Isaacs and Matt Damon star in a scene from the movie "Green Zone." The USCCB Office for Film & Broadcasting classification is L -- limited adult audience, films whose problematic content many adults would find troubling. The Motion Picture Association of America rating is R -- restricted. Under 17 requires accompanying parent or adult guardian.

NEW YORK (CNS) — The early stages of the U.S. invasion of Iraq, and the ultimately fruitless search for the Saddam regime’s weapons of mass destruction, provide the context for "Green Zone" (Universal), an idealistic but raw combat drama.
?
Loosely inspired by journalist Rajiv Chandrasekaran’s 2007 best-seller "Imperial Life in the Emerald City," this is the fictional tale of dedicated Army Chief Warrant Officer Roy Miller (Matt Damon). Frustrated that his unit’s hunt for the weapons of mass destruction that served as the justification for American intervention has led only to a series of dead ends, Miller begins to question the validity of the intelligence reports on which he and his comrades have been relying.
?
His doubts bring him to the attention of two feuding residents of the titular American enclave within the Iraqi capital: Defense Department official and ideologue Clark Poundstone (Greg Kinnear), who’s wholly indifferent as to how the conflict began so long as Iraq can be transformed into a functioning democracy, and rogue CIA station chief Martin Brown (Brendan Gleeson), a veteran Middle East analyst who believes the entire operation rests on a foundation of lies and fabrications.
?
Miller’s pursuit of the truth also leads him to Wall Street Journal reporter Lawrie Dayne (Amy Ryan), whose series of pre-war articles on the dangers posed by Saddam’s weapons program had helped fuel public support for the offensive, pro-American local Freddy (Khalid Abdalla), who’s willing to endanger himself to help secure a better future for his country, and former Saddam ally Gen. Ayad Hamza (Aymen Hamdouchi).
?
Hamza’s out to strike a political bargain with the new occupiers, failing which, he’s prepared to help launch a nationwide insurgency.
?
The subjects of just war and political truth telling are obviously worthy themes, especially the very timely issue of whether a preemptive strike can ever meet the criteria for a morally acceptable use of force according to the standards of traditional Catholic teaching.
?
But director Paul Greengrass’ uneasy mix of political conspiracy yarn and action adventure increasingly takes on the qualities of a personal crusade by Miller, thereby blunting Brian Helgeland’s script’s ability to dissect larger questions of real-life morality. And the occasionally gritty scenes of battle and captivity, together with the persistently salty dialogue — all, perhaps, accurate enough — further restrict the appeal of this well-intentioned but flawed war story.
?
The film contains considerable action violence, some of it bloody, torture, several uses of profanity and frequent rough and crude language. The USCCB Office for Film & Broadcasting classification is L — limited adult audience, films whose problematic content many adults would find troubling. The Motion Picture Association of America rating is R — restricted. Under 17 requires accompanying parent or adult guardian.
?
– – –
?