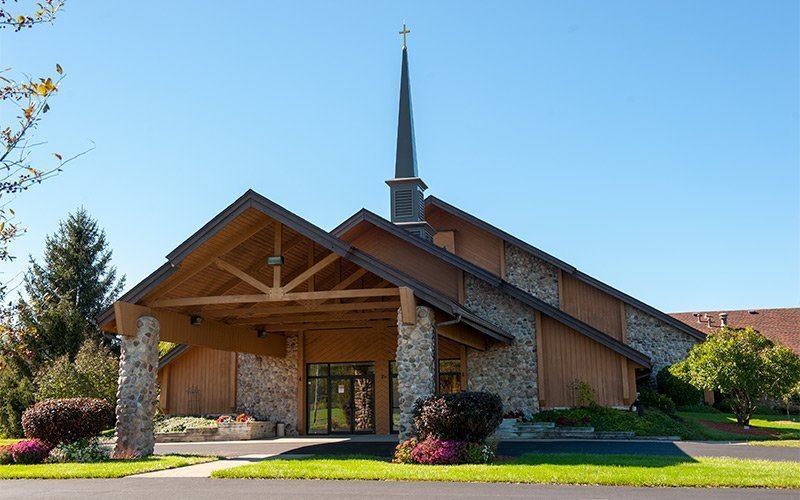 HAMLIN — Through an initiative prioritizing folks who are unable to attend church, St. Elizabeth Ann Seton Parish is striving to resist the phrase “out of sight, out of mind.”

The parish’s greeting-card ministry consists of volunteers mailing cards and notes of encouragement to people in nursing facilities, who are homebound, or otherwise can’t be at Mass regularly. According to Mary Arnold, the ministry’s co-coordinator, nearly 25 card-senders take part in the effort, with each volunteer shouldering the expense for greeting cards and postage.

Cards are often mailed in conjunction with such special occasions as birthdays, Christmas and Mother’s Day. Another key facet of the ministry is writing friendly notes once or twice a month — “even if it’s just a comment like, ‘Nice that the summer is here,’” Arnold said.

“I’ll send a little note saying, ‘Just hoping you’re well and to let you know the community is thinking about you,’” added Lynn Fisher, the ministry’s other co-coordinator.

Deacon Chris Fisher — who is Lynn’s husband and serves as the parish deacon — noted that the greeting-card initiative sprang from the St. Elizabeth Ann Seton social-ministry committee’s effort two years ago to expand its programming. Other programs include attention to human-rights and respect-life issues as well as collecting money, goods and supplies for people in need.

A suggestion box was set up in the church, and one respondent wondered if the parish could better maintain connections with folks who might be lonely due to their isolation. From there, Deacon Fisher said, “We kind of just came up with names of people we knew and started sending cards.”

Based on strong initial feedback, the roster of both senders and receivers has expanded. Arnold and Lynn Fisher maintain that list, updating it as needed and making sure that cards are sent regularly. They also place occasional notices in the parish bulletin, asking if more people might be interested in mailing or receiving cards.

Typically, a letter sender does not know the receiver personally. Yet every so often, ministry coordinators receive heartfelt feedback reflecting just how valuable their efforts are. Some thank-you notes are reprinted in the bulletin; one such letter stated that “your notes and cards encourage a semi-shut in to participate as much as I am able in life,” and another said that “when a person is sick for a long time and doesn’t get out of the house, they are forgotten and can become invisible for the most part. Constant notes from the same people periodically makes one feel as if they are part of an active life for someone. They are still useful in some way.”

The Fishers said these expressions of appreciation underscore the ongoing value of personal, handwritten communication — an art that they feel has diminished in this era of computer correspondence.

“I like the old-fashioned cards that come in the mail with a signature,” Deacon Fisher said.

“Part of that is lost in this generation,” his wife remarked.

Deacon Fisher also noted that it’s easy to get sidetracked from reaching out to people who aren’t readily visible: “We get so busy in our daily lives that we don’t make time. How can we go beyond what we normally do?”

The greeting-card ministry is a great vehicle in that regard, he said, observing that such efforts strike at the core of Jesus’ teaching.

“We get up there and preach, saying the same message: ‘Think of your neighbor, love your neighbor.’ This (ministry) is the way people answer that message, letting people know they haven’t been forgotten,” he said.

Arnold, meanwhile, emphasized that the small investment of time per month can generate significant payoffs.

“You are giving joy to these people,” she stated.