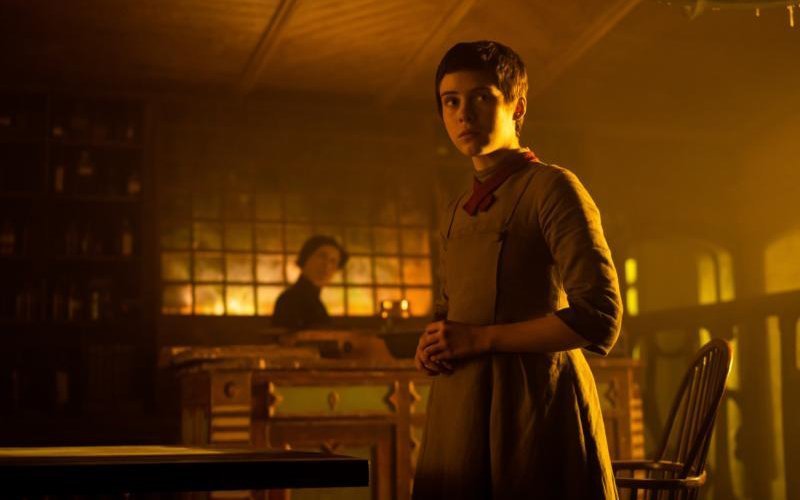 Alice Krige and Sophia Lillis star in a scene from the movie "Gretel & Hansel." (CNS photo by Orion Pictures)

Yes, well, it is a witch’s house, after all.

It’s so perceptive of 16-year-old Gretel (Sophia Lillis) to make that observation to her 8-year-old brother, Hansel (Sammy Leakey), as they’re gobbling a high-calorie meal in this cozy malevolent lair in the heavily atmospheric “Gretel & Hansel” (Orion).

Screenwriter Rob Hayes and director Oz Perkins, in this horror-film framing of the Brothers Grimm fairy tale, also have given said witch, Holda (Alice Krige), an origin story as a girl (Jessica De Gouw) abandoned by her father, who made a bargain with another witch. (The woods here are chockablock with sorceresses looking to take in children.)

Otherwise, the film covers the familiar outlines of the old story, with two children negotiating a dark and very foggy forest as they escape a famine-scarred home life in search of food and security.

So far, Gretel’s had bad choices offered to her, turning down a lecherous man looking for a housekeeper, and rejecting a suggestion she enter a convent.

The forest primeval somehow seems safer, although both she and Hansel, who tries to master an ax, have to contend with their hunger. Holda doesn’t lure them so much with a dessert cart as with a massive buffet which gets replenished, we see, in the basement with more of her dark arts.

Holda, of course, wants to fatten up children in order to eat them. Occasionally, the souls of her earlier victims haunt Gretel in her dreams. She can get a full stomach, but never a good night’s sleep.

Holda explains to Gretel her potential as someone on the cusp of womanhood, and Gretel also has to decide whether it’s good to keep her sisterly loyalty to her brother, or abandon him as a burden. Seldom does self-reliance have so many pitfalls as when any seeming refuge turns out to carry risks to life and limb.

The story was first published in 1812, and Engelbert Humperdinck’s opera version has been performed since 1893. So going in, you know just what you’re basically going to get.

This version, ladled with horror tropes, keeps Gretel’s bravery, but between the fog and the creepy basement, many viewers might want to choose off another menu.

The film contains an occult theme, fleeting gore, a scene of drug use and a reference to menstruation. The Catholic News Service classification is A-III — adults. The Motion Picture Association rating is PG-13 — parents strongly cautioned. Some material may be inappropriate for children under 13.