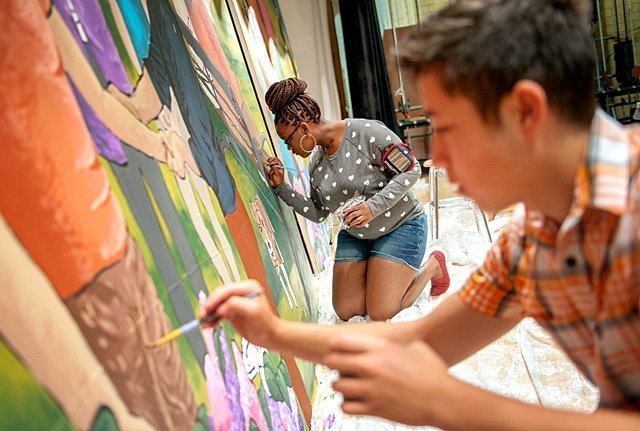 ROCHESTER — The guiding principal of the local, grassroots coalition called Great Schools for All is socioeconomic integration as a means of reducing the concentration of poverty in Rochester’s city schools and creating more equitable education opportunities across school-district lines within Monroe County.

Through cooperation between county school districts and the potential creation of new magnet schools — schools that focus on one specific concept, such as language or leadership — the coalition’s leaders hope to replicate the integration of students from different socioeconomic and ethnic backgrounds that began in Raleigh, N.C., more than three decades ago. The countywide district in the Raleigh area has demonstrated that educating lower- and higher-income students together raises the graduation rate for lower-income students without a negative impact on the more affluent students, explained Don Pryor of the Center for Governmental Research in Rochester.

“They have closed the gap” in academic achievement, he remarked of the Raleigh schools, noting that graduation rates for lower-income students in Raleigh have reached more than 70 percent. “We’d love to have those graduation rates here.”

The initial goal for the Raleigh’s countywide school district was for all schools to be integrated by ethnicity and subsequently by socioeconomic background, explained Kevin Hill, assistant social studies coordinator at North Carolina State University’s College of Education. With socioeconomic integration, the goal was for eachschool to cap at 40 percent its enrollment of students who receive free or reduced-cost lunches, with the remaining 60 percent of students coming from middle- and upper-income families.

By contrast, more than 90 percent of students enrolled at most schools in the Rochester City School District receive free or reduced-cost lunches, officials note.

Raleigh’s schools would have been facing the same situation as Rochester’s — failing schools filled with students from high-poverty neighborhoods — if leaders had not taken action more than 30 years ago. Great Schools for All representatives learned about that process in their travels to Raleigh last year, said the Rev. Lynette Sparks, interim associate pastor of Third Presbyterian Church in Rochester.

A call to action to address this situation in Raleigh came in the 1980s, as city leaders pushed for racial and social integration in the schools. When a public referendum to merge Raleigh’s city and suburban school districts failed, city leaders changed tactics and successfully lobbied the state legislature for the creation of the Wake County Public School System, explained John Thomas, a retired Rochester urban planner who was part of the 11-member local delegation that traveled to Raleigh (see the sidebar on this page).

As the Raleigh community moved forward with the merger, however, residents representing all sectors of the city were brought to the table to create the new schools, noted the Rev. Michael Ford, a senior minister at Lake Avenue Baptist Church in Rochester, another member of the local group that visited Raleigh.

The Wake County-Raleigh approach is worth replicating locally, noted Mark Hare, a Great Schools for All member from Rochester’s Cathedral Community.

“You have dramatically better outcomes for low-income students” in schools with a 60 percent-40 percent socioeconomic mix of students, he said. “If you just look at it from that point of view … how can we use public dollars to produce better results?”

Research has shown why such integration is important. Based on an original report written after the 1964 Civil Rights Act, a professor from the University of Wisconsin at Madison found that attending a high-poverty school has a profoundly negative impact on a student’s achievement “above and beyond the effect of his or her individual poverty or minority status.” Information on the professor’s findings is available at www.wcer.wisc.edu/publications/workingPapers/Working_Paper_No_2006_09.php.

But no one in Rochester should think that Raleigh has solved the problem of educational equality for all, noted Hill, who set up meetings between representatives in Raleigh and the Rochester group and also traveled here last fall.

“We were just fortunate to have a cross-section of folks that really was visionary and realized that the quality and effectiveness of schools helped make up the economic engine of the community, not to mention helping put together a (well-educated) citizenry and workforce,” he said. “I see them (the Rochester group) right about now as we were 20 or 30 years ago when we were facing the same issue.”

Employing a system of magnet schools with different areas of focus, from STEM (science, technology, engineering and math) to language immersion to leadership, many — but not all, Hill noted — of Raleigh’s 171 schools reach the desired 60 percent-40 percent ratio of student socioeconomic makeup. Some of the schools operate year-round and others are vocational.

Rev. Ford said the bottom line for Rochester is that the city’s high-poverty, racially segregated schools mirror those of Raleigh before the merger. Instead of just talking about the problem of how to improve their schools, Raleigh officials brought people together to tackle and solve those issues and get everyone on board with the chosen solution, he added.

“There was a change in the rhetoric,” Rev. Ford said of the changes that happened in Raleigh. “They said, ‘This is something we need to address.’ … Rochester needs a shift in the rhetoric.”

What Hill sees as helping to improve Rochester’s schools is that the Great Schools for All group comprises concerned citizens who are interested in doing more than talking about a problem. As long as these citizens do their homework, take a measured approach and do not jump into anything, they may find success, he said.

“It seemed very clear there was community involvement, and that’s one of the more important factors,” Hill added. “If you can’t get a group of key stakeholders of different sectors in a community together, you’re not going to have any luck.”

In Minnesota, 10 percent of seats in every school district statewide must be left open for students who live outside the district, Vargas said. Meanwhile, a Nebraska model for working across district lines has potential implications for how Rochester and Monroe County’s suburban districts could collaborate, Pryor explained. Learning Community of Douglas and Sarpy Counties financially links Omaha’s city schools with nearby districts, allowing students to enroll in districts where they do not live if doing so helps make those schools more economically diverse, according to information at school-diversity.org.

Hill said Raleigh’s efforts to create more balanced schools began as a way to desegregate across racial as well as economic lines.

And while Monroe County may not pursue formation of a countywide school district, local educators, colleges and businesses could combine forces to create countywide magnet schools demonstrating how schools enrolling a socioeconomic mix of students can be successful as they were in Raleigh, Pryor, explained.

Meanwhile, as a way to attract city and suburban families, Rochester school officials will continue trying to strengthen schools that have unique programs, such as the International Baccalaureate Program at Joseph C. Wilson High School, Vargas said. The district also has added arts and sports programs to other schools as a way to improve the schools, he added.

“We need to start chipping away at those (achievement) disparities,” Pryor said. “By offering voluntary choice options of really strong schools with a special emphasis — a special focus that no one else is offering — we can attract people from the city and suburbs on a voluntary basis and break down the concentration of poverty. … Then, we can build on that.”

Great Schools for All members have the willingness to take on whatever work is needed, including lobbying state legislators, as they continue to grow this grassroots movement, Sparks said.

“Great Schools for All is focused on a systematic piece and our unique contribution,” she added. “If not us, who?”

EDITOR’S NOTE: For more information or to participate in Great School for All, visit http://gf4a.org.