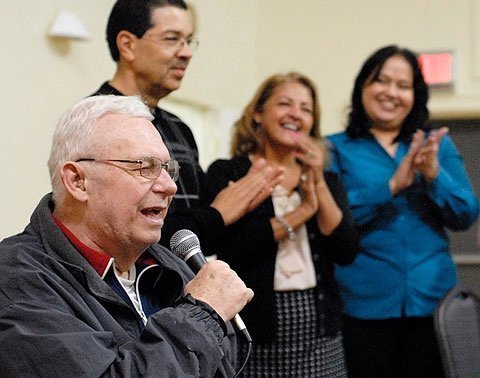 Father Laurence Tracy was honored with a plaque Dec. 6 at St. Michael Church for his advocacy on behalf of Rochester's Latino community.

ROCHESTER — The Bilingual Council of the Rochester City School District honored Father Laurence Tracy during its final parent meeting of 2011.

Father Tracy was one of the founders of the council, which was originally called "Proyecto Adelante," explained Gloria Sabastro, council president, during the Dec. 6 meeting held at St. Michael Church’s hall.

"This (priest) has been a pillar of our community for more than 50 years," she said. "If it wasn’t for him, we wouldn’t have this council."

The crowd of more than 50 people stood up and gave Father Tracy a standing ovation after he entered unexpectedly through a side door, with Deacon David Palma bringing him in via wheelchair. The priest said that he had spinal surgery in November and was expected to recover over the final weeks of 2011.

Father Tracy said that he was pleasantly surprised by the plaque presented by José Cruz, school board member, and Gladys Pedraza-Burgos, chief of the school district’s division of youth and family services.

"Father Tracy for us is the conscious of our community," said Cruz as the crowded responded with an "Amen."

"Whatever we were lacking, whatever problem, whatever need … he was always there for us," Cruz added. "He is a person that gives of his life. … He is like a saint."

The plaque that was presented to Father Tracy was inscribed with the words, "in gratitude for your dedication, service and support for this community."

Father Tracy said that he has been on this journey with the Latino community for so long because the path to justice and equality for the people, especially the youths, is a difficult and long battle.

"And (this battle) doesn’t take just one day, or one week; it takes years," he added. "We must continue fighting this battle."

Father Tracy noted that he also was grateful to the community for all the help and support they had been providing him during his recovery through cards, visits and food.

He joked that he thought the gathering was just the usual bilingual council meeting that he had regularly attended prior to having his surgery. The meeting/surprise party was one of his first outings since the Nov. 15 procedure to address scoliosis and spinal stenosis, Father Tracy added.

In addition to the plaque, the event also featured a performance by Los Tres Arpegios, whose members donated their time to provide folkloric music, which is Father Tracy’s favorite kind of music, Sabastro added.

She also reminded the parents in attendance that Father Tracy has been a role model for the community in terms of the kind of advocacy that they should be providing for their own children.

"There are still unmet needs," Sabastro said. "We have to advocate for the education of our children."