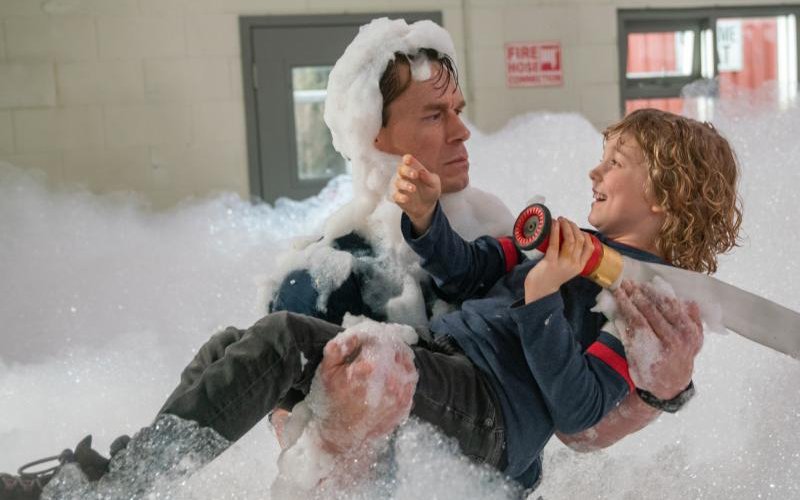 John Cena and Christian Convery star in a scene from the movie "Playing With Fire." (CNS photo by Paramount)

NEW YORK (CNS) — If your folks warned you against “Playing With Fire” (Paramount), their advice was sound. Though generally harmless, this comedy is so painfully unfunny, it’s almost fascinating.

Hilarity is meant to ensue when Jake and company rescue three kids from the forest fire that has engulfed their family cabin. As teenage Brynn (Brianna Hildebrand) explains, she’s been looking after her much-younger siblings, Will (Christian Convery) and Zoey (Finley Rose Slater), while their parents are away on a trip. So, until Mom and Dad can pick them up, Jake will have to give the young uns shelter.

As Jake applies to replace his retiring superior, Commander Richards (Dennis Haysbert), and pursues a halting romance with animal expert Amy Hicks (Judy Greer), the kids get up to all manner of supposedly comic mischief. The banality of their antics is only exceeded by the falsehood of the emotions worked up when Dan Ewen and Matt Lieberman’s script turns serious.

There’s a single risque exchange between Jake and Brynn when the latter suggests that Jake invite Amy, who has come to dinner, to stay the night. She means that Amy can occupy one of the many vacant bunks in the dormitory where she, Will and Zoey are staying, but Jake jumps to conclusions.

Beyond that, the only other objectionable patch comes with an entire sequence devoted to the kind of potty humor that has become a seemingly inevitable ingredient in fare aimed at children.

Overall, accordingly, director Andy Fickman’s picture is acceptable for a wide audience. Yet even the least demanding moviegoers will likely find “Playing With Fire” all wet.

The film contains a veiled sexual reference and considerable scatological humor. The Catholic News Service classification is A-II — adults and adolescents. The Motion Picture Association of America rating is PG — parental guidance suggested. Some material may not be suitable for children.