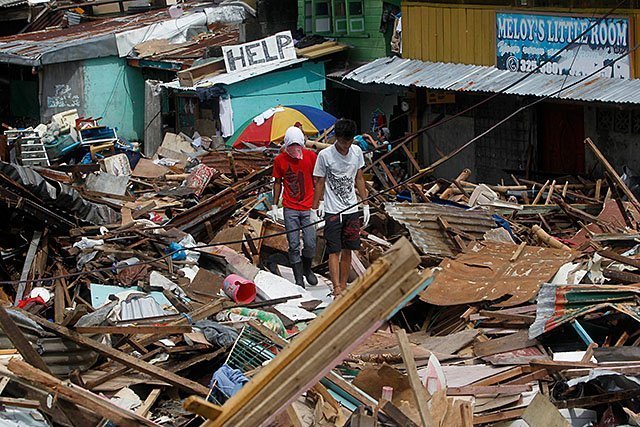 Residents walk over the rubble of destroyed houses in the city of Tacloban, Philippines, Nov. 13. Hundreds of thousands of people in Leyte province have been displaced by Typhoon Haiyan, one of the worst storms to hit land.

MANILA, Philippines (CNS) — After days of watching televised scenes of dead bodies scattered around Tacloban, Order of Augustinian Recollect members organized a group of priests and a brother to bless bodies of people who died while fleeing the flood brought on by Typhoon Haiyan.

"’Spiritual Marines’ will be in Tacloban tomorrow to bless the dead, comfort the sorrowing and bring hope to people affected" by Haiyan, Recollect Brother Tagoy Jakosalem told Catholic News Service Nov. 13. He spoke by phone from Cebu where he and five priests were awaiting a ferry that would take them to western Leyte Island.

He said his team was also taking an ambulance loaded with relief goods to distribute to typhoon victims.

At sunrise the next day, they planned to drive it to the east coast of Leyte to Tacloban City, where a storm surge inundated entire villages, destroyed buildings, electric posts, vehicles and other property and drowned people whose bodies lay along roads and beaches, some wrapped, others untouched.

"We will go around and sprinkle the bodies with holy water and say prayers for the dead, alone or with whoever wants to join us," Brother Jakosalem said.

He cited news of slow distribution of relief goods and services, saying his group would offer to help.

"We will go to places where relatives of our priests and sister friends lived and see how they are doing. We will ask people who are there how they are and what they need.

"I brought some painting kits to use for some drawing activity with the children some place, to give them something to do while clearing operations are going on," said the brother, who is a painter.

He said the team plans to stay with communities until Nov. 16. The priests and brother came prepared to "live like Boy Scouts" in tents or wherever they can pass the nights away, Brother Jakosalem said.