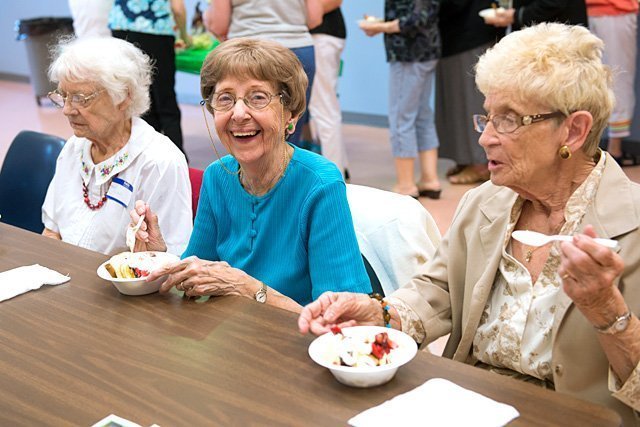 Alberta VanGraafeiland (from left), Betty Pfeifer and Jean Meagher attend an ice cream social for members of the Circle of Hope ministry at Greece’s St. John the Evangelist Parish June 17.

GREECE — Nobody — not even family members or close friends — can fully grasp what it’s like to be widowed without having endured the experience themselves.

This point is readily acknowledged by Rose DiBella and Mickey Slattery. It also underscores the importance of Circle of Hope, a ministry for widows and widowers for which they serve as coordinators.

Circle of Hope is based at St. John the Evangelist Parish, where DiBella and Slattery are parishioners. The social and support group is available to all regardless of parish or religious affiliation, offering activities for folks who are seeking brighter days following what — for many — is the most significant loss of their lives.

"It’s a comfortable place to be with people who have similar feelings," Slattery said.

Participants enjoy a variety of get-togethers, mainly in the form of social gatherings on the third Friday of each month between September and June. The next such meeting will be at 7 p.m. on Sept. 16 at St. John the Evangelist’s parish center. Other Circle of Hope activities include a summer picnic; a banquet; St. Patrick’s Day and Christmas parties; sessions with guest speakers; out-of-town bus excursions; and even trips every few years to as far away as Las Vegas.

In addition to fun doings, Circle of Hope offers days of reflection and an annual memorial Mass that is "very important to everybody," said Slattery, who first joined Circle of Hope in 2000 after her husband of 27 years, Jack, died the previous year.

DiBella, who lost her husband of 35 years, James, in 1992, has been closely involved with Circle of Hope throughout its existence. She said the group began shortly after the diocesan Synod concluded in 1993, with many synod participants having voiced a need for greater outreach toward people who are widowed. Through the encouragement of St. John the Evangelist’s late pastor, Father Joseph D’Aurizio, DiBella and fellow parishioner Alice Brookins set about getting Circle of Hope started.

Some key early guidelines for the ministry remain in place today: One is that it would not be a bereavement group for people whose grief was still fresh, but more geared toward those who felt relatively ready to move forward. It also would not follow the "divorced/widowed/separated" model of many groups; DiBella and Slattery explained that divorced and separated people experience their loss differently, often with hard feelings toward their former spouse. In addition, Circle of Hope would not be limited to St. John the Evangelist parishioners but open to the wider community.

The group grew quickly, and to this day it still draws considerable numbers. An average of 60 people attend each gathering, and approximately twice that amount are dues-paying ($10 per year) members. Slattery and DiBella noted that they’ve received many calls and letters expressing gratitude for the ministry’s existence.

Despite its popularity, DiBella acknowledged that attending a Circle of Hope event for the first time can be a difficult step.

"I stand by the door and make sure everybody has a seat with each other," she said.

This spirit of welcoming is emphasized in a portion of a prayer recited at the beginning of each meeting: "You are a God of compassion, and you have touched us through the smile and the hug of a new friend. May we be instruments of your compassion."

The compassion is genuine, because all participants know the feeling of having lost a spouse. Yet although their common ground is rooted in tragedy, Circle of Hope members often rediscover pleasurable social connections through their time together, both at scheduled group activities and beyond.

"It’s building up friendships — having somebody to do something with, going out to dinner, out to movies," DiBella said.

"I used to think I didn’t have a bucket list anymore (after becoming widowed) because I didn’t think I had anybody to do things with. Now my kids say, ‘You’re never home,’" Slattery remarked.