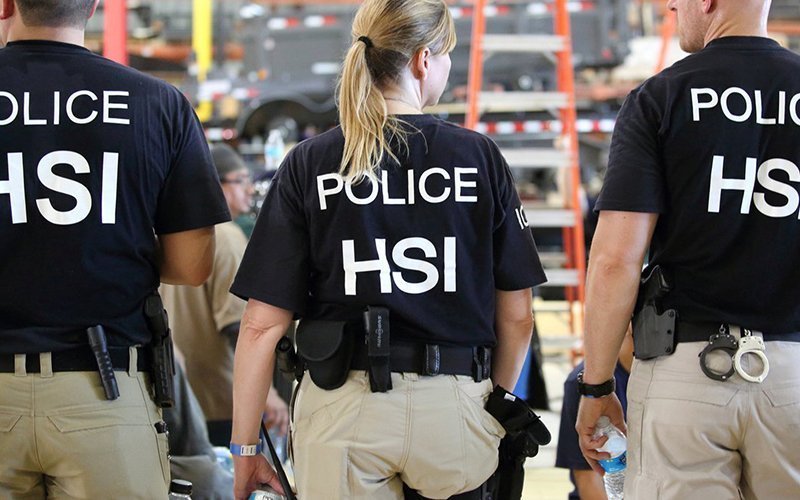 U.S. Immigration and Customs Enforcement's Homeland Security Investigations officers are pictured in this 2018 file photo. Immigrant groups filed a complaint Sept. 14, 2020, in which a nurse claimed a high number of hysterectomies are being performed on Spanish-speaking women at an ICE detention center in Georgia. (CNS photo by U.S. Immigration and Customs Enforcement/Handout via Reuters)

WASHINGTON (CNS) — Groups that support immigrants have lodged a complaint with the Department of Homeland Security’s Office of Inspector General saying that a nurse has come forward with detailed allegations of mass hysterectomies she said have been performed on immigrant women in detention in a Georgia facility.

The groups say a nurse who worked at the Irwin County Detention Center in Ocilla, Georgia, said the Immigration and Customs Enforcement facility, run by the private prison company LaSalle South Corrections, was the setting for the procedures she alleges took place and that the women, who spoke little or no English, may not have understood what was happening to them.

Various news agencies have identified Dawn Wooten as the nurse, who also publicly spoke of negligent conditions to deal with COVID-19 at the facility, in the complaint filed Sept. 14.

In news conference the same day, organized by the Government Accountability Project and Project South, who filed the complaint and posted her comments online, Wooten said she raised concerns about workers not having proper or enough personal protective equipment. She also asked why detainees were not being tested for COVID-19. She said she was demoted when she began to ask “why?”

As a single mother, she decided to say something because the women, “they have lives, they have families,” she said.

ICE has said that it does not comment on matters pending before the inspector general.

Immediately after the news conference, Georgia House Minority Leader Robert Trammell Jr., a Democrat from Luthersville, sent the Georgia Board of Nursing and the Georgia Composite Medical Board a letter “to request that you immediately suspend the licenses of the providers named in the whistleblower complaint pending a full investigation by your offices.”

Catholic organizations voiced outrage at the allegations and said they wanted action and answers.

The alleged “forced sterilization of immigrants and refugees by ICE agents is an evil violation of my Catholic faith, the law of our country and international human rights,” said Sister Campbell, a Sister of Social Service. “It is the antithesis of a pro-life stance. The victims of these crimes must be protected, and the perpetrators and their enablers must be held responsible.”

Sister Campbell blamed the alleged actions on President Donald Trump, calling his rhetoric “dehumanizing” and “racist” and describing the detention center as “an experimental concentration camp set up with taxpayer funding.”

“The world is waking up to the horrors of these ICE allegations. We demand an immediate, thorough and transparent investigation into the whistleblower complaints alleging medical malpractice and, indeed, genocide against immigrants held in American detention centers,” said Lawrence E. Couch, director of the National Advocacy Center of the Sisters of the Good Shepherd.

“Who initiated these policies? Who carried them out? Who covered them up?” he asked. “Americans will not stand for this, and neither will our democracy.”

She called for a full and immediate investigation of the allegations of forced hysterectomies, calling this “the ultimate act of violence against women.”