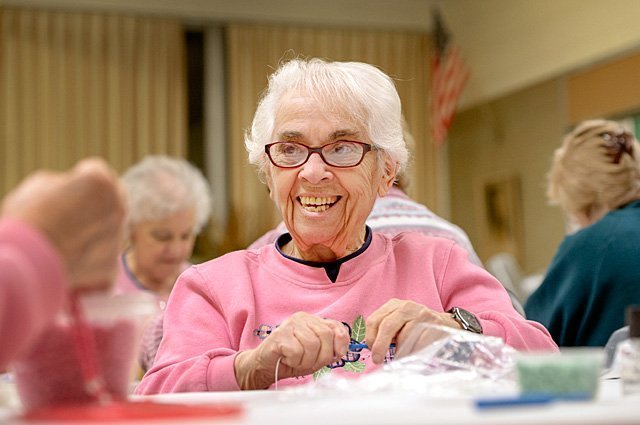 Anne Felice prepares string to be used by fellow rosary makers from St. Francis and St. Clare Parish during a gathering of the group at the parish’s ministry center next to St. Mary Church in Waterloo Nov. 17. The group has made around 12,000 rosaries since it began in October 2013.

The discovery of two beat-up old rosaries inspired a Romulus woman to start a group that has created more than 10,000 rosaries and given them away to people all over the world.

"They go to Nicaragua, they go to Brazil, they go all over the United States," said Albina Meyers, one of the cofounders of the rosary-making group at St. Francis and St. Clare Parish in Waterloo and Seneca Falls.

Meyers was volunteering at the parish during the summer of 2013 when she discovered the two rosaries inside a box of donated items that were being packaged and sent to the needy in Nicaragua through the parish’s annual Nicaragua Project.

"They were so dirty and pitiful-looking, and I said to one lady, ‘We can do better than this,’" Meyers recalled.

After learning about a woman in Newark who made rosaries by hand and donated a batch to the Nicaragua Project, Meyers began thinking about starting a rosary-making ministry at her parish. Praying about the idea solidified her belief that God was calling her to do so, and in August 2013 she started the group with the help of fellow parishioners Kelly Rauscher and Dorothy Chapin. That month the team placed their first order for plastic beads, crucifixes and cords through Our Lady’s Rosary Makers International in Kentucky, and by the time the feast of Our Lady of the Rosary rolled around on Oct. 7, the group was up and running, Meyers said.

"I’m just in complete awe at the people who have come forward," she told the Catholic Courier.

Approximately a dozen parishioners come to St. Francis and St. Clare’s Ministry Center in Waterloo each Monday night to make the rosaries. They don’t take very long to make, and Meyers said sometimes the group is able to make 300 in one night. The next day one of the group members takes the rosaries to daily Mass, where they are blessed by a priest. Some of the rosaries are placed in front of the statues of Mary in the parish’s two worship sites, St. Mary in Waterloo and St. Patrick in Seneca Falls. Pamphlets explaining how to pray the rosary are placed next to the rosaries, and parishioners and visitors are free to take them home, Meyers said.

The remaining rosaries are sent to Nicaragua, distributed at public places in the Finger Lakes and Rochester regions, and given to anyone who needs a rosary or expresses an interest. Rauscher said the rosary-making ministry is "very necessary" because the world needs the rosary and Mary’s intercession now more than ever.

"You go to another country and fight a war with guns, but we have spiritual warfare right now going on in everyone’s life. The rosary is the weapon to fight that spiritual war, and we’re giving them the arms they need to do that," she said.

The rosary is a meditative prayer that’s easy for people to pray no matter where they are, Rauscher added. She is not deterred by the fact that some of the people who pick up the group’s rosaries might not understand what the rosary is or how to pray it.

"Every one of those rosaries was blessed. They might leave them in their dressers or in their cars, but just to have them on you or near you I think is great," she said. "Of course, the more people that pray the rosary, the better. I just hope people get back to their faith more, because it seems like they’re getting away from it."

The rosary-making group always welcomes new members as well as monetary donations to be used to purchase supplies, Rauscher said. Anyone interested in learning more about the group may contact the parish at 315-539-2944, and anyone interested in donating to the ministry may send donations made out to St. Francis and St. Clare Parish to 25 Center St., Waterloo, NY 13165.