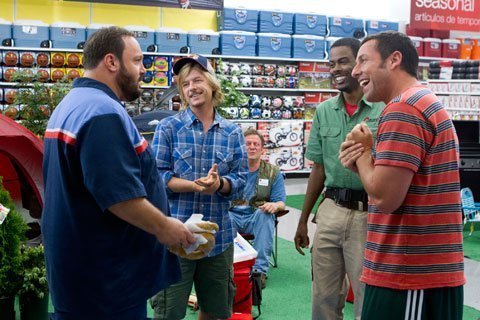 NEW YORK (CNS) — Eventually, Adam Sandler is going to make a film that consists entirely of a single unbroken stream of urine. Until then, there’s "Grown Ups 2" (Columbia), which comes fairly close.

This nearly plotless sequel to his 2010 comedy consists of a series of vignettes that abandon character development for sight gags, nearly all of them involving body functions, most of them scatological, and hits to the crotch when they don’t involve leering at women’s breasts.

Director Dennis Dugan and Sandler, who co-wrote with Fred Wolf and Tim Herlihy, pick up the story of Sandler’s successful Hollywood producer Lenny Feder, who has returned to his hometown with wife Roxanne (Salma Hayek Pinoult) and their three children. He continues his adventures with former high school classmates Eric (Kevin James), Kurt (Chris Rock) and Marcus (David Spade) on the last day of the school year.

Marcus deals with his newly discovered and thuggish out-of-wedlock son, Braden (Alexander Ludwig). Eric has an unseemly attachment to his mother (Georgia Engel). Lenny deals with old issues involving bully Tommy (Steve Austin). Kurt tries to find a way to exploit the fact that wife Deanne (Maya Rudolph) has forgotten their wedding anniversary. Collectively, they deal with the bullying of a noisy group of frat boys who have taken over their childhood swimming hole.

In this movie’s universe, the only purpose women in exercise tights have are for ogling, bald men are for slapping around, and Nick Swardson’s mentally ill and over-medicated bus driver, Nick, is for a wide range of crude physical humor when he’s not leering at a gay exercise instructor.

Nearly every possible sight gag involving excretory functions, whether with beer bottles or a soft-serve ice cream machine, is put into use, beginning with a runaway deer in the opening minutes. For good measure, there are three vomiting sequences. The tenuous plot threads combine during Lenny’s raucous ’80s party at the finish.