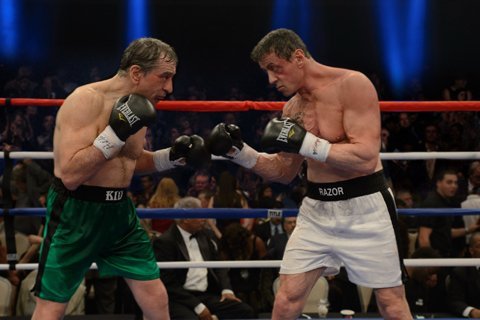 This comedy about retired boxing rivals working to get back into shape in preparation for their long-deferred final showdown amuses intermittently. But its theme of family reconciliation is undercut by the misuse of a child actor’s age-appropriate innocence to forward some of the script’s frequent sex jokes as well as by dialogue chockablock with foul vocabulary.

As an ESPN-style opening montage informs us, Billy "The Kid" McDonnen (De Niro) and Henry "Razor" Sharp (Stallone) were the outstanding fighters of their Reagan-era heyday. Each managed to score a single victory over the other. But, on the eve of a scheduled tie-breaker, Razor inexplicably announced his retirement, leaving fans to speculate for decades over what might have been.

Fast forward to the present and a raucous confrontation between the two old enemies goes viral on the web, and puts dollar signs in the eyes of down-on-his-luck promoter Dante Slate (Kevin Hart). Though reluctant to have anything to do with The Kid, steelworker Razor, who squandered his fortune soon after retiring, needs the cash Dante is offering, while The Kid, a successful car dealer, is determined to prove he was the true champ.

So they get ready to rumble.

Besides their professional competition, Razor and The Kid have unresolved personal issues fueling their mutual antagonism: Back when they were first duking it out, The Kid had a one-night stand with Razor’s true love Sally Rose (Kim Basinger) that resulted in the couple’s breakup — and in the birth of Sally’s now-grown son BJ (Jon Bernthal).

Despite Sally’s warnings that The Kid is a louse, BJ wants to get to know his dad and wants his young son Trey (Camden Gray) to spend time with grandpa as well. So he agrees to put his own knowledge of the sweet science to work as The Kid’s trainer.

Here Director Peter Segal and screenwriters Tim Kelleher and Rodney Rothman introduce a troubling aspect to the proceedings less predictable than the flow of vulgarity that prevails throughout.

Trey’s ignorance of such matters as the obscene interpretation that can be put on his father’s initials is played on extensively. And the boy is later made to intrude on the aftermath of a casual sexual liaison. His proximity to such talk and behavior is, needless to say, more unsettling than humorous. It lends an unsavory air to the picture as a whole.

The film contains mature themes, including promiscuity, pugilistic violence, an off-screen nonmarital encounter, much sexual humor, about a dozen uses of profanity, a single bleeped instance of the F-word and pervasive crude and crass language. The Catholic News Service classification is L — limited adult audience, films whose problematic content many adults would find troubling. The Motion Picture Association of America rating is PG-13 — parents strongly cautioned. Some material may be inappropriate for children under 13.