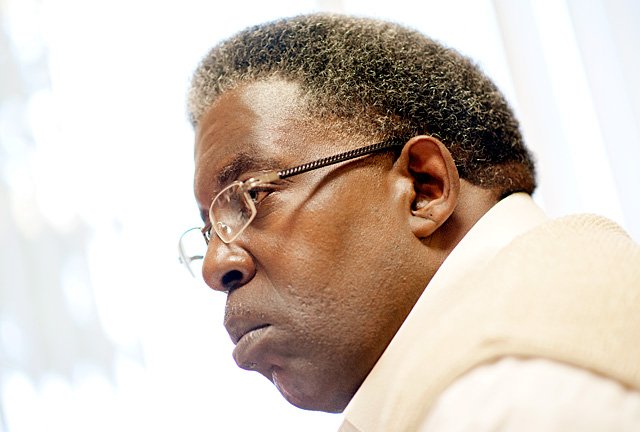 Ben Elam Jr., a veteran who struggled with addiction and homelessness, is an intern at Compeer Corps, a veteran-to-veteran mentoring program.

He was at risk of being homeless, of being jailed and of being killed, but Ben Elam Jr. says a host of angels saved his life.

"You kick into a mode — a survival mode," Elam said of coping with war. "You have that instinct in you."

After seven years of service, Elam returned home and became an alcoholic. He worked as a truck driver and got a DWI, which is when he met his first angel: retired Veterans’ Court Justice Patricia Marks. She gave him the choice of getting clean or going to jail. Elam opted for recovery and therapy.

"I went through the program and did everything I was supposed to do," he said.

Now Elam is working toward his goal of counseling addicted vets who are at risk of becoming homeless. He said he is grateful for the many programs in the community that help homeless and struggling veterans.

He singles out several of these programs — his angels — including the people at the Veterans Outreach Center and East House, who helped him find a place to live when he exited an unhealthy relationship.

Elam receives case management from East House and lives in an apartment managed by Providence Housing Development Corp., an affiliate of diocesan Catholic Charities. Funding for the housing is provided through the U.S. Department of Housing and Urban Development and the Veterans Affairs (VA) Supportive Housing program (HUD-VASH).

"I don’t think I could have made it without the program," Elam said.

Renee Klatt, veterans housing director for Providence, said the HUD-VASH program is small — it helps 20 homeless veterans ranging in age from 21 to 67 who have a physical disability or mental-health or chemical-dependency diagnosis.

The HUD-VASH program is one of many VA programs that aim to end homelessness among veterans, said Sarah Levis, homeless coordinator for the Canandaigua VA and the Rochester Outpatient Clinic at 465 Westfall Road, Rochester.

The VA also offers a range of housing options, including buildings on its Canandaigua and Bath campuses, walk-in services in Rochester, and street outreach, as well as homelessness prevention assistance. The Canandaigua VA also is home to the National Call Center for Homeless Veterans, which may be reached at 1-877-4AID-VET.

"If you see a veteran who is struggling, connect to the VA," Levis said.

Other programs for homeless veterans include:

* Compeer Corps, which matches veterans, including homeless veterans, in a positive supportive relationship with another vet. Elam is an intern with the program.

* Zion House in Avon, a transitional-living home for homeless female veterans that offers access to treatment and work experience. Since November 2010, it has helped 40 women transition into permanent housing, said the Rev. Kelly Ayer, director of Zion House.

* Catholic Charities of Steuben’s Kinship Community Residence, a shelter for homeless men that provides the Healthcare for Homeless veterans program. This program places veterans in crisis into safe housing and in intensive outpatient services through the Bath VA. Many veterans graduate from the program to independent living, said Kinship Residential Program Director Kim Robards-Smith of Catholic Charities of Steuben.

* Catholic Charities of Steuben also offers a Supportive Living Program, which offers homeless vets apartment independence and supportive services. It is housed in the former convent of All Saints Parish and in area apartments.

"(Veterans’) motivation is so strong," said Karl Brandenburg, the Supportive Living Program coordinator. "Their willingness to do the work is such that they succeed even more than our nonvets."

That’s the story with Elam, who is now sober, engaged to be married and in college. He said he thanks God that he is still alive after all he’s been through.