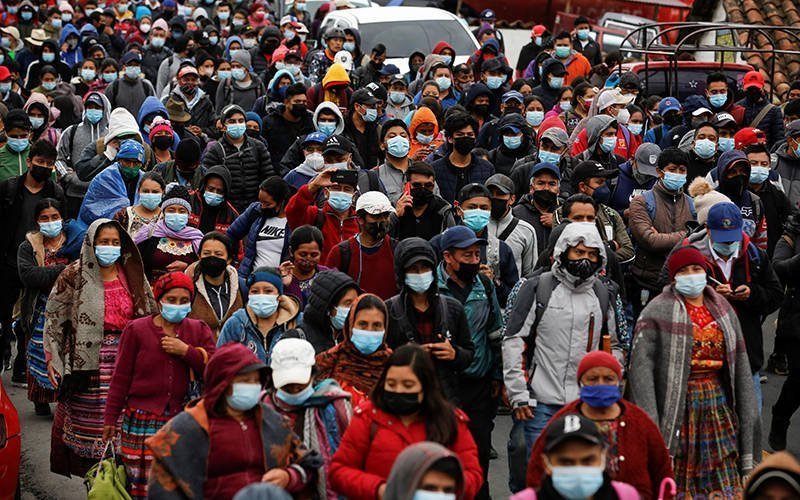 MEXICO CITY (CNS) — Guatemalans took to the street to demand the ouster of the Central American country’s president and attorney general over the firing of an anti-impunity prosecutor whose work caused discomfort for President Alejandro Giammattei.

“This was the straw that broke the camel’s back,” said Nery Rodríguez, director of the Archdiocese of Guatemala City’s human rights office. “The impression is that it was done to protect corrupt people, to protect politicians, who have done so many things to take advantage of the state as such.”

Guatemala’s bishops also backed the demonstrations — and the included calls for a national strike — while priests and religious have participated in protests.

“Removing the prosecutor is seen as paving the way to impunity,” Bishop Domingo Buezo Leiva of Izabal said in a message to Catholic News Service.

The discontent ran deeper than the firing of the anti-impunity prosecutor, according to observers in Guatemala, who pointed to the poor handling of the pandemic, a lack of vaccines, a lack of transparency in the contracts signed for vaccines, and politicians failing to address pressing needs such as poverty.

“The issue of purchasing vaccines has been very obscure,” Bishop Buezo said. “But it’s only part of the corruption, which is present in each of the government’s actions.”

Scalabrinian Father Mauro Verzeletti, director of the Guatemala City migrant shelter, attended the protests and said the demonstrators wanted “an end to corruption, vaccines in their arms and something to eat.”

Sandoval, the fired prosecutor, fled to neighboring El Salvador after being removed. He has accused Porras, the attorney general, of removing him over investigations into corruption cases linked to the president — something Giammattei denies.

Sandoval’s removal drew international condemnation, and U.S. officials suspended cooperation with the Guatemalan attorney general’s office. Vice President Kamala Harris visited Guatemala in May and stressed fighting corruption as key for development in the region and for slowing migration.

The Guatemalan bishops’ conference called the removal of the country’s top anti-graft prosecutor “illegal and arbitrary” and said it “did irreparable damage to the country.”

“Those rejoicing at the dismissal do so because they feel safe and comfortable when this regime of impunity is consolidated,” the bishops said in a July 25 statement.

“This act signifies an evident setback in the fight for an efficient fight against corruption and impunity, which has done so m