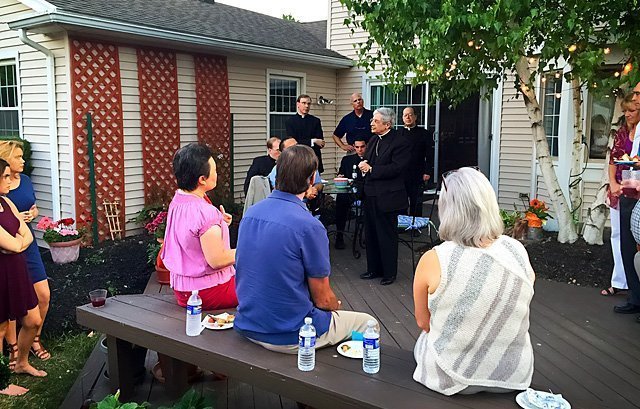 When practicing medicine in a culture that doesn’t usually support Catholic principles, many doctors who want to provide excellent care in accordance with church teachings can feel isolated and alone, according to Dr. Richard Seeger, an ophthalmologist in Rochester.

"We are practicing in a society that usually doesn’t support where we (Catholic physicians) think the practice of medicine should be," he added. "We feel like we are under attack."

That’s why Seeger wants to spread the word about The Finger Lakes Guild, an organization through which Catholic physicians can support each other, grow in their faith and be advocates on the issues that affect them as Catholic doctors. A charter guild of the Catholic Medical Association since 2012, the organization is open to all physicians, health-care professionals, medical students, residents and nurses throughout the 12 counties of the Diocese of Rochester, said Seeger, the guild’s president. The group holds both social and faith-based gatherings, and in August more than 50 people attended a summer social, including members of the clergy and Bishop Salvatore R. Matano. The guild’s next event will be its annual White Mass at St. Anne Church in Rochester. All physicians, health-care professionals and their families are invited to attend the Mass, which will be celebrated by Bishop Matano.

Besides helping its members grow in their faith and become better acquainted with each other, the group also strives to help "witness its values to the community," according to a recent post on the guild’s website, www.fingerlakescma.org. To accomplish this, Seeger said guild members have visited local politicians to express their points of view on such issues as physician-assisted suicide and abortion. The guild also was one of several organizations that sponsored a local conference this past February that addressed the historical, medical, legal and ethical aspects of assisted suicide. In the future, Seeger hopes the guild will be seen as a resource on behalf of the medical community and be able to make presentations to state legislators in regard to medical-related bills.

"It’s important for us to educate the public and the Catholic community that we are here, we do exist and we are a resource," Seeger said.

This month, Seeger and five other local physicians will attend the Catholic Medical Association’s annual educational conference in Washington, D.C. The conference, whose theme is "Virtuous Medicine: The Joy and Privilege of the Catholic Physician," will feature presentations and workshops on such topics as physician-assisted suicide, spirituality in medicine and perinatal hospice.

"It (reaching out to medical students and residents) is something we need to build upon," Seeger said of the guild, noting that St. Anne Church was chosen as the location for the White Mass due to its proximity to the University of Rochester Medical Center and Strong Hospital.

When thinking of his own involvement with the Finger Lakes Guild, Seeger said the organization has helped him grow in his faith and become more educated on the issues facing the medical community, especially issues that are outside of his particular practice.

"I think whatever we can do to support ourselves and our faith is so important," he said.