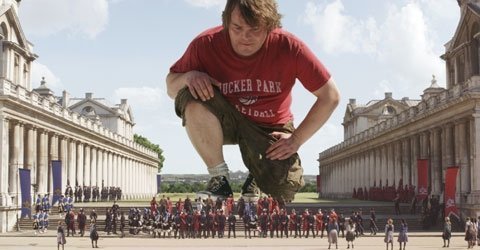 Yes, it sure can.

It’s not because the project is a mediocre effort attempting to cash in on the elusive comic abilities of Jack Black, who plays a modern riff on the traveler Lemuel Gulliver, hero of Jonathan Swift’s classic novel, first published in 1726. It’s because this film was made and is being marketed as family entertainment, and so has to be held to that standard. Presumably, this is an entertainment for children to consume.

By that measure, it’s the cinematic equivalent of toxic lunch meat. Director Rob Letterman and screenwriters Joe Stillman and Nicholas Stoller have produced a sour, slapped-together botch with a noxiously cynical message: You can plagiarize and lie without penalty and still end up with the girl — and the job — of your dreams.

Black’s Gulliver, a mailroom clerk at a New York newspaper, is a lazy schlub who dreams of becoming a writer to impress travel editor Darcy Silverman (Amanda Peet). He works up enough courage to ask her for an assignment, but when she requests writing samples, he produces a couple of articles by cutting and pasting from travel websites.

In the real world, that’s no joke — such an underhanded act means lost jobs and derailed careers. In this story, it earns Gulliver an assignment that has him piloting a small watercraft in the Bermuda Triangle, where a huge storm and waterspout transport him to the Kingdom of Lilliput, a vaguely British island populated by a race of people only 4 inches tall.

Gulliver, famously first tied down and imprisoned by the Lilliputians and called The Beast, eventually becomes a defender of the land ruled by King Theodore (Billy Connolly) and his princess daughter Mary (Emily Blunt).
Gulliver’s first heroic act is to extinguish a palace fire by urinating. But the onscreen incident goes way beyond the somewhat indecorous potty humor of Swift’s account, degenerating into queasy imagery as many Lilliputians, including the king, are knocked down and drenched by the fire hose-intense stream.

Gulliver also aids a romantic subplot between Princess Mary and commoner Horatio (Jason Segal), but this isn’t sustained well enough to generate interest. Gulliver spins whoppers to convince the Lilliputians that he’s an American president ("President Awesome") and is rewarded for his heroism with Gulliver-sized accommodations, including an entertainment center in which Lilliputians costumed as the band Kiss provide a live-action version of the video game Guitar Hero.

Although Darcy catches up with Gulliver’s plagiarism, the deeply flawed moral takeaway remains intact: Theft and falsehood can be a path to achieving your dreams. That’s a harmful lesson for children and an unwelcome message for adults.

The film contains skewed moral values, graphic scatological humor and some intense action scenes. The Catholic News Service classification is O — morally offensive. The Motion Picture Association of America rating is PG — parental guidance suggested. Some material may not be suitable for children.