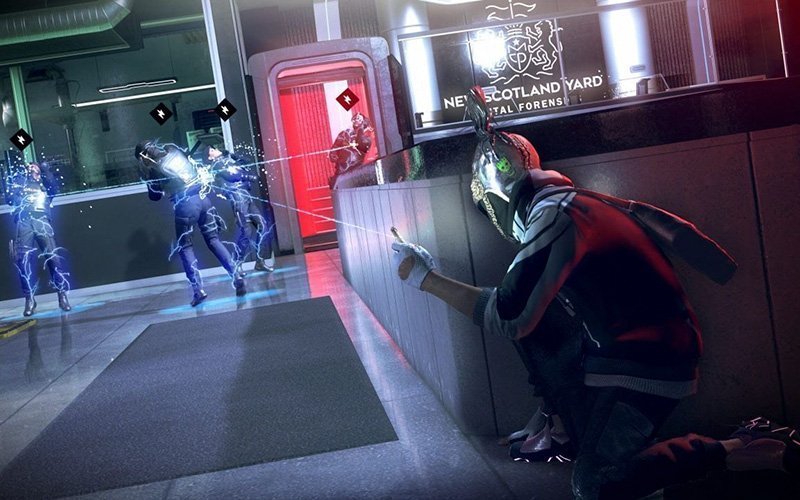 This is a scene from the video game "Watch Dogs: Legion." (CNS photo by Ubisoft)

NEW YORK (CNS) — A group of hackers works to free London from the grip of dystopian government surveillance in “Watch Dogs: Legion” (Ubisoft).

The morally mixed nature of their struggle as well as the amount of mayhem in which players can choose to participate make this action-adventure game suitable only for grown-ups.

DedSec, the protagonists from previous titles in the franchise, are currently at a serious disadvantage since they have been falsely incriminated in a series of explosions that have rocked the British capital and that were actually carried out by Zero Day, a terrorist organization. In the aftermath of the bombings, officials in the city have handed over all policing authority to a military company called Albion.

Obsessed with artificial intelligence and technology, Albion personnel regard humans as nothing more than “bugs in the software.” And they indiscriminately deport or kill anyone who opposes them.

The character the gamer controls is one of the few DedSec members left. So recruitment of new comrades in the dual battle against Zero Day and Albion is one of the player’s primary objectives.

Nonlethal means are available for taking down enemies. But so, too, are deadly melee weapons and firearms. Thus it’s possible, albeit difficult, to do a stealthy playthrough without causing any fatalities.

On the other hand, gameplay can include far darker elements. The death of an opponent is accompanied by cries of pain and some blood splatters. Over-the-top cutscenes are even more gruesome as characters are shot in the head or stabbed in the neck.

Sexual content is less explicit. Gamers can visit a red-light district with ads for prostitution, for example, but there’s no depiction of nudity or sexual activity.

Albion is clearly a corrupt organization that places no value on human life. But DedSec is, at best, an ethically confusing alternative, not least because it implements an ends-justify-the-means approach to resisting its adversaries. Nor do its members give any consideration to the power vacuum that will inevitably emerge once Albion is eliminated.

There are lapses in storytelling to accompany the moral difficulties. The most unusual aspect of the narrative is the absence of a main character. There are no fewer than nine million playable personas in the game. Consequently, everyone is the hero here, yet no one is.

This may represent an impressive statement about the power of collective action to topple an oppressive state. But it also makes it difficult for players to connect with any of the individuals who populate “Legion.”

Additionally, the process of acquiring new allies strains credulity. The gamer simply approaches a random stranger on the street and asks if he or she is willing to join DedSec, an underground, supposedly outlawed, organization.

Whether the person thus propositioned is an elderly grandmother or a petty criminal, the response is always yes — in exchange for a simple favor. And it turns out that everyone who joins up just happens to be a talented hacker.