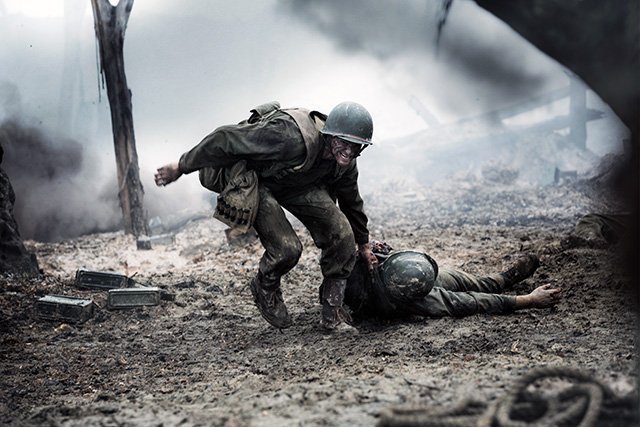 Andrew Garfield stars in a scene from the movie "Hacksaw Ridge." The Catholic News Service classification is L -- limited adult audience, films whose problematic content many adults would find troubling. The Motion Picture Association of America rating is R -- restricted. Under 17 requires accompanying parent or adult guardian.
By Joseph McAleer
Catholic News Service
NEW YORK (CNS) — In the Gospel of John, Jesus tells his disciples, "No one has greater love than this, to lay down one’s life for one’s friends."
That statement is vividly realized in "Hacksaw Ridge" (Summit), which recounts the extraordinary heroism of Army medic Desmond T. Doss (Andrew Garfield) during the Battle of Okinawa in the closing days of World War II.
A committed Christian and conscientious objector who refused to bear arms, Doss was nonetheless eager to serve his country. He single-handedly saved the lives of more than 75 wounded soldiers while under constant enemy fire, earning him the Medal of Honor, awarded by Congress.
Director Mel Gibson, working from a screenplay by Andrew Knight and Robert Schenkkan, presents his fact-based drama in two parts. The first probes Doss’ childhood and upbringing in rural Virginia, while the second unfolds on Okinawa, atop a jagged cliff nicknamed "Hacksaw Ridge" for the brutality of the Japanese offensive there.
War is indeed hell, as Gibson pulls no punches in extreme battle scenes reminiscent of "Saving Private Ryan." Awash in blood and gore, with heads blown off and soldiers set afire by napalm, the violence is no doubt realistic, but will necessarily restrict this film’s audience to those adults willing to endure such sights.
We first meet Desmond as a spirited boy (Darcy Bryce) who is losing a fistfight with his older brother, Hal (Roman Guerriero). Desmond picks up a brick and strikes Hal, knocking him out cold.
Recoiling in horror, the boy fears he has killed his sibling (shades of Cain and Abel). He hasn’t, but the incident shakes him to the core, and inspires his steadfast pacifism.
"To take another man’s life is the greatest sin of all," his kindly mother, Bertha (Rachel Griffiths), reminds her son, citing their beliefs as Seventh-day Adventists.
Fast forward 15 years, and both sons have enlisted, to the dismay of their abusive father, Tom (Hugo Weaving). A veteran of World War I, he knows firsthand the horror and futility of war.
But Desmond is keen to play his part, despite the misgivings of his fiancee, local nurse Dorothy Schutte (Teresa Palmer). "While others are taking life, I will be saving it," he reassures her.
Needless to say, Desmond faces ridicule and beatings by his fellow recruits at boot camp, who regard him as a freak and coward. The platoon’s leader, Sgt. Howell (Vince Vaughn), and the company’s commander, Capt. Glover (Sam Worthington), make his life miserable, and lobby for his discharge.
But Doss holds firm, calling himself a "conscientious cooperator." A military court rules that he may serve as a medic, and not bear arms.
Once on Okinawa, Doss proves his mettle and earns the respect of his platoon as he runs back and forth on the battlefield to remove the wounded. His nearly superhuman actions would seem farfetched were they not true.
As might be expected with Gibson at the helm, "Hacksaw Ridge" does not sideline Doss’ religious convictions, which are integral to his story and his performance on Okinawa. With Dorothy’s Bible in his breast pocket, Desmond utters the cry, "Please God, let me get one more," as he repeatedly plunges back into the abyss.
References to baptism and the resurrection give "Hacksaw Ridge" a transcendent, messianic quality that draws comparison with Gibson’s "The Passion of the Christ." As did that film, "Hacksaw Ridge" uses the pain and bloodletting it portrays to inspire viewers with a redeeming Christian message.
The film contains graphic war violence with much gore, brief rear male nudity, a scene of marital sensuality and considerable crude language. The Catholic News Service classification is L — limited adult audience, films whose problematic content many adults would find troubling. The Motion Picture Association of America rating is R — restricted. Under 17 requires accompanying parent or adult guardian.
– – –
McAleer is a guest reviewer for Catholic News Service.
Copyright © 2023 Catholic News Service, Inc. All rights reserved. Linking is encouraged, but republishing or redistributing, including by framing or similar means, without the publisher's prior written permission is prohibited.