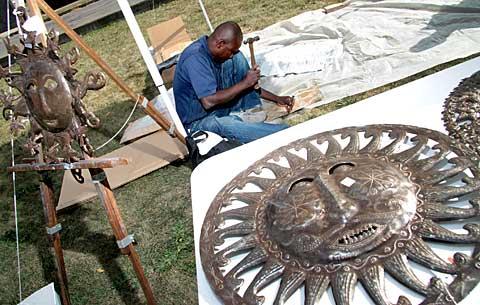 For many, the word "Haiti" brings to mind images of poverty and earthquake devastation. Yet heartwarming success stories also can emerge from those tragic circumstances, as Elmirans learned on Sept. 25.

In his morning visit to the arts center, Augustin showed how he draws his designs with chalk on a piece of metal and then, using chisel and hammer, cuts the intricate pattern. For example, he created a tree with birds while noting that he draws inspiration from God’s creation. Guests were invited to sample such Haitian dishes as rice gumbo and tropical fruits while listening to Haitian music CDs.

Moving to a festival tent at St. Mary for the afternoon, Augustin generated a stir among young people while forming additional metal art.

"The outdoor event attracted neighborhood residents, including many children who were fascinated watching the artist. One young boy stated that he wants to be an artist like that when he grows up," said Kathy Dubel, justice-and-peace coordinator for Catholic Charities of Chemung/Schuyler.

Deacon Paul Sartori, St. Mary’s parish deacon, said he was impressed by what Augustin and other Haitian artists can do with discarded metal drums and simple tools.

"I was amazed at how a piece of ordinary scrap metal could be transformed before your eyes into a beautiful piece of art that anyone would be proud to hang in their garden or home," Deacon Sartori remarked. "What is even more amazing is how the work of these artisans transforms lives. By marketing their goods in the U.S. and in other countries, Jhonson and his fellow artisans are able to feed their families, provide shelter and contribute to the rebuilding of their country."

Dubel observed that Augustin’s appearance in Elmira provided a nice lead-in for Work of Human Hands sales being held throughout the region this fall, mostly at Catholic parishes. Augustin’s work is available at these sales, which are organized by CRS so that Third World artisans and makers of such high-quality goods as coffee and chocolate can receive fair compensation. Deacon Sartori noted that St. Mary Parish was chosen to host Augustin in light of its strong fair-trade sale last year.

"It certainly makes the Work of Human Hands catalogue come alive when you meet the artist," said Dubel, who serves as diocesan CRS coordinator.

Augustin closed out his day at St. Mary’s parish house attending a dinner that was hosted by Father John DeSocio, pastor of St. Mary; Rita Bergh and Judy Beecher, cochairs of the parish social-ministry committee; and Deacon Sartori. Accompanying Augustin as guests were Gisele Fleurant, who was his interpreter for the weekend; and Serena Sato who, like Fleurant, works on behalf of fair-trade artisans and producers of goods.

Augustin, Fleurant and Sato also were guests the previous night at a Catholic Charities-sponsored dinner at Sweet-N-Saucy Restaurant. There, they met with 15 representatives from area parish social-ministry committees and emphasized the importance of Work of Human Hands sales in the United States so that Haitian metal artisans can earn income "that provides a floor of dignity for themselves and their families," Dubel said.

In addition to supporting fair-trade sales, Dubel noted that CRS has been in Haiti for many years and was the first organization to respond to the impoverished Caribbean country’s staggering earthquake in January 2010 by providing emergency food, water and shelter. Dubel added that CRS has since brought needed jobs to Haiti in the form of clearing debris and building solid houses that will withstand future earthquakes.

"What the Work of Human Hands initiative really does is it provides an opportunity for people of many cultures to share God’s gifts. We share with them the gift of our abundance and they share with us the gift of their creativity and artistic expression. It really seems like a win-win scenario," Deacon Sartori said.

EDITOR’S NOTE: The works of Jhonson Augustin and other Third World artists will be displayed at Work of Human Hands sales in Elmira on Nov. 6-7 at Blessed Sacrament Parish (Ss. Peter and Paul and St. Patrick churches) after all Masses; and Dec. 3 at the Catholic Charities office, 215 E. Church St., from 10 a.m. to 5 p.m. Sales also will take place at Holy Cross Church in Dryden, Tompkins County, on Nov. 7 after 8:30 a.m. Mass and at the parish’s craft fair Nov. 13-14.