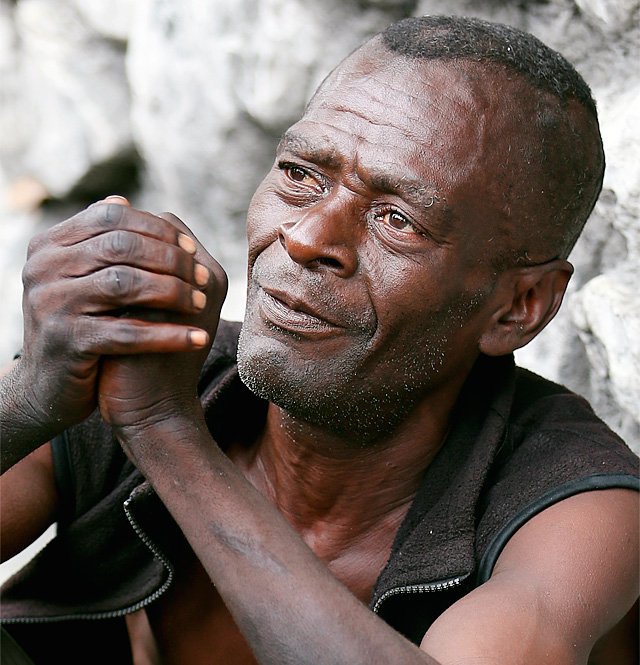 Jean-Robert Noel, who said he was homeless, sits along a street in in Port-au-Prince, Haiti, Feb. 9. Five years ago Jan. 12, a devastating earthquake rocked the poverty-stricken Caribbean nation.

PORT-AU-PRINCE, Haiti (CNS) — If not for the flickering flames under his blackened pot, Jean-Robert Noel might be totally missed.

The man in tattered pants and unzipped vest cooking a midday meal along John Brown Avenue was hard to see from the vehicles whizzing by.

Noel seemed totally oblivious to the traffic, lighter than usual Feb. 9 because of a general strike organized by transit union leaders and anti-government activists. Then the occupants of one of the vehicles stopped to chat.

"This is the first time somebody come to talk to me," he said in Creole-accented English, his raspy voice sounding much like a motorcycle zipping by a few feet away.

"I tell you, I have no family," the squatting, sooty-faced Noel continued, inching closer to his meager possessions: a foam pad, a large backpack and a few plastic bags filled with water bottles. "I don’t know where to sleep. I don’t know where to get money to eat. I have nowhere. I live in the street. I sleep here."

"Here" is a narrow, dirt-encrusted berm alongside a ruddy stone wall just a few feet from the edge of the roadway.

Stenciled in blue block letters above his head on the wall is a government slogan in Creole: "Kite peyim mache." ("Let my country move forward.")

The slogan appears every couple of hundred feet along this stretch of the avenue, perhaps serving as a rallying cry for the beleaguered government of President Michel Martelly. John Brown Avenue is one of the main routes to the middle class suburb of Petionville, where Martelly’s support in the capital region is strongest.

Noel, 41, did not describe himself as homeless, but just without a place to stay. Pedestrians and nearby residents occasionally give him a few Haitian gourdes to buy food, which he uses at a nearby market. On this day, Noel was cooking cornmeal and beans. Other days it’s rice and beans. Meat and fresh vegetables are luxuries he can rarely afford.

Other than those brief interactions, Noel said, he is on his own.

Homelessness in Haiti is not prevalent and social services for homeless people are few. In the city, the occasional homeless person — usually identified by their ragged clothing, dirt-covered bare feet and generally unkempt appearance — is seen silently sitting against a wall with a few coins at his or her feet. Most Haitians manage to find someplace to stay rather than risk life alone on streets.

Noel did not recall how long he has been without a home. Years, he said, without being specific. He recalled that he once painted pictures and made a decent living at it, selling some of his work at a downtown gallery. He signed his name "Jean."

"I’m happy that you talked with me," he added.