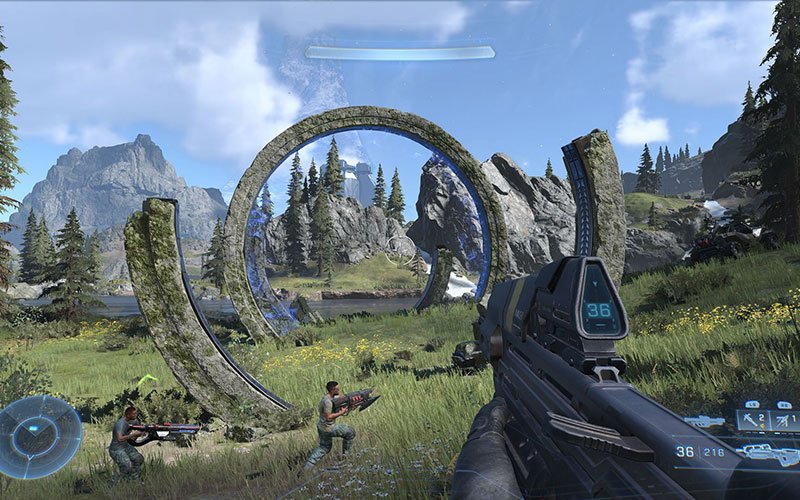 This is a scene from the video game "Halo Infinite."(CNS photo by Microsoft)

Thrilling adventures, enthralling storylines and top-tier visuals combine to make this latest installment a more-than-worthy successor to titles stretching back to 2001’s “Halo: Combat Evolved.” The game’s restrained depictions of conflict, moreover, make it suitable for most players.

The plot of the first-person shooter revolves, once again, around series protagonist Master Chief. In this iteration, the warrior is trapped on an alien space station that contains a deadly armament of potentially apocalyptic power. Using both his enhanced abilities and elite weapons, he rescues fellow soldiers and invades enemy holdouts as he works to undermine his adversaries’ efforts to destroy humanity.

In addition to the main storyline, multiplayer modes are available. These include options that pit small teams of two or four against each other, as well as larger squads of 12 in a new mode called Big Team Battle.

Voice chat is automatically available so players can communicate. This option can, however, be disabled if parents wish to limit online exposure.

The fighting is intense but not gory. And the ranks of Master Chief’s opponents are made up exclusively of evil extraterrestrials out to exterminate the human race.

Master Chief has a somewhat disturbing backstory. Kidnapped as a child, he was victimized by the SPARTAN-II Project, a scheme designed to create a host of super-soldiers. Together with other kids, he was subjected to extensive genetic and mental experimentation as part of this malign program.

Fortunately for gamers committed to Gospel values, this topic is dealt with in a morally appropriate way. The narrative makes it clear that SPARTAN-II is an example of science untethered to any ethical standards and therefore likely to run amok. Additionally, far from being front and center in “Halo Infinite,” this troubling subject is merely part of its background lore.

Playable on Xbox One, Xbox Series and Windows.