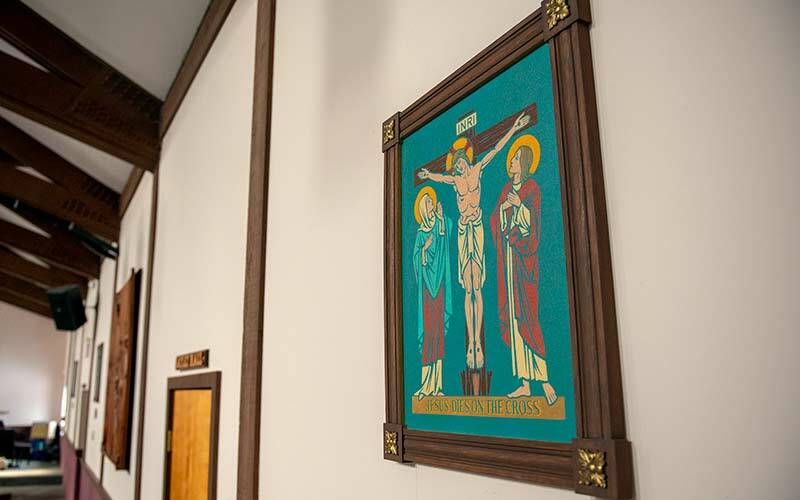 HAMLIN — What’s new at St. Elizabeth Ann Seton Parish these days? Quite a bit, in terms of key religious artifacts.

Particularly noteworthy are newly erected Stations of the Cross adorning the church’s back and side walls. The framed drawings depicting Jesus’ passion were the original stations at Immaculate Heart of Mary Church in Painted Post, Steuben County, when that parish was founded in 1952. After Immaculate Heart of Mary closed in 2019, Father John Gagnier — who serves as St. Elizabeth Ann Seton’s parochial administrator — sought to acquire the stations; they went up in the Hamlin church this past October.

“Now there’s a visual picture for people to look at,” Father Gagnier said, noting that the stations will enhance the prayerful atmosphere during Stations of the Cross each Lenten Friday as well as on Good Friday. He added that worshipers are free to pray their own Stations of the Cross whenever the church is open, using Way of the Cross booklets provided by the parish.

The Stations of the Cross are among a number of items to have recently found a home at St. Elizabeth Ann Seton. For instance, a large crucifix — suspended over the altar — came from Holy Ghost Church in Gates, which closed in 2020. Father Gagnier noted that the crucifix was blessed at St. Elizabeth Ann Seton by Bishop Salvatore R. Matano on Sept. 13, 2020 — the day before the feast of the Holy Cross.

Meanwhile, statues of Mary and Joseph have been in place since Christmas 2020 on either side of the church’s tabernacle area directly behind the altar. Both statues came from the former St. Mary’s Hospital in Rochester. In addition, St. Elizabeth Ann Seton acquired a tabernacle in the fall of 2021 that had been in storage at the Diocese of Rochester’s Pastoral Center in Gates. According to Father Gagnier, the tabernacle is in the process of being refinished and he expects it to be dedicated within the next couple of months. A new sanctuary lamp will be lit next to the tabernacle at that time in accordance with General Instruction of the Roman Missal No. 316: “In accordance with traditional custom, near the tabernacle a special lamp, fueled by oil or wax, should shine permanently to indicate the presence of Christ and honor it.”

Another new addition to the church — but one that’s not readily visible — is a relic of St. Mateo Correa Magallanes that has been placed inside the altar of St. Elizabeth Ann Seton’s daily Mass chapel. It is a first-class relic, meaning that it’s been derived from the body of a saint. The altar containing the relic was blessed after the 9:30 a.m. Mass Feb. 6, which, Father Gagnier noted, was the 95th anniversary of St. Mateo Correa Magallanes’ death. The Mexican saint, a priest of the Archdiocese of Durango, was martyred during the Mexican Revolution because of his refusal to violate the seal of confession. He was canonized in 2000 by St. John Paul II.

Father Gagnier said he acquired the relic of St. Mateo Correa Magallanes in 2006 from Durango, first having it inserted into an altar while he was serving at the former Our Lady of Mercy, and later Holy Name of Jesus, churches in Greece. He added that the daily Mass altar at St. Elizabeth Ann Seton, where the relic now rests, was a part of St. Dominic Church in Shortsville when he was serving there.

The various additions at St. Elizabeth Ann Seton are occurring as the parish notes its 40th anniversary. Father William Amann, who currently resides at the Sisters of St. Joseph Motherhouse in Pittsford, was appointed the parish’s founding pastor on Feb. 10, 1982. Father Gagnier said his goal of equipping the church with additional artifacts is designed, in a sense, to complete the current building that was constructed in 1987.

“During the building of the church, many things were left unfinished due to a lack of funds,” Father Gagnier explained. “With the help of Bishop Matano, his staff and my fellow priests, we have been able to obtain beautiful things that lend a greater dignity to our church. These things were obtained at little or no cost to our parish.”

Father Gagnier added that “there is a mutual understanding among priests that when liturgical artifacts become available, efforts are made to keep them within the diocese before calling upon dealers to turn them into cash.”