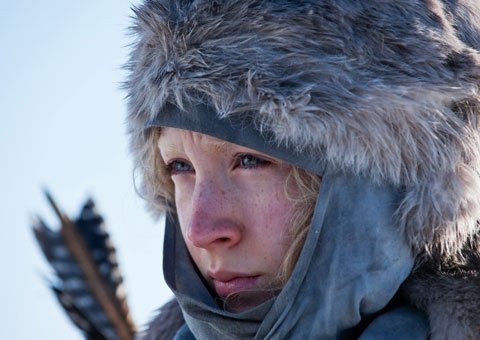 NEW YORK (CNS) — The title character in "Hanna" (Focus) — played by Saoirse Ronan — spends all of her screen time running, jumping and hiding. At least, that is, when she’s not efficiently dispatching various people who are out to get her.

According to Seth Lochhead and David Farr’s script, however, Hanna’s killer instinct isn’t a moral failing; it’s in her genes. She’s hardhearted Hanna, short on social and communication skills because she’s a teen Terminator. Set loose in the world, she’s an innocent … until she’s threatened.

Engaging performances overcome plot improbabilities, though not moral murkiness, to keep this espionage thriller watchable. But director Joe Wright substitutes fight and chase sequences — and extreme close-ups — for dialogue, leaving the audience on its own until nearly the end to figure out how this slim girl became so ruthless.

Hanna Heller, raised in a remote cabin near the Arctic Circle, has been trained by her father, Erik (Eric Bana), to kill as instinctively as a wild animal.

To what specific end such training has been undertaken is never made clear. But when Hanna decides she’s sufficiently prepared, she switches on a signaling device that will lure the CIA to the cabin. Her dad — known by the agency as a "rogue asset" — disappears for a planned rendezvous with Hanna in Berlin. American soldiers descend, and the body count starts piling up.

Taken into custody and transported to a secret base in Morocco, Hanna escapes and makes her way across the country and eventually to Europe by posing as an ethereal German girl.

Somewhat like Frankenstein’s monster, she’s befuddled by technology as simple as an electric light, since she has never encountered it before. As for matters more personal, woe betides the rash lad who attempts to give Hanna her first kiss — a chaste one at that — in the midst of a party.

Trailing Hanna is CIA agent Marissa (Cate Blanchett), the only person who knows what dark secrets Hanna and Erik possess.

The ending is as predictable as these things get, though muddled story lines instrumental to the wrap-up — and references to genetic manipulation and abortion — restrict the film’s appropriate audience to religiously and ethically well-grounded adults.

The film contains mature themes, extensive but non-gory gun and martial-arts violence, a single profanity and fleeting crude language. The Catholic News Service classification is L — limited adult audience, films whose problematic content many adults would find troubling. The Motion Picture Association of America rating is PG-13 — parents strongly cautioned. Some material may be inappropriate for children under 13.