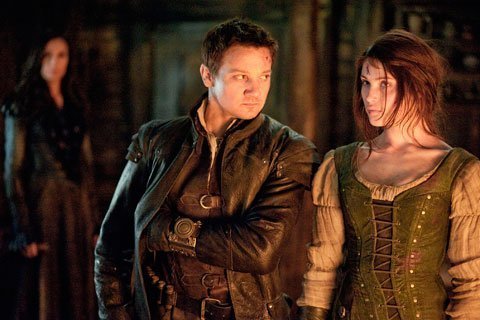 NEW YORK (CNS) — The title doesn’t quite say it all about "Hansel & Gretel: Witch Hunters" (Paramount). There’s not so much witch-hunting going on as there is nonstop splatter, sans dialogue, hung on far less plot than a video game.

Witches are shot, stabbed, blown up, slain by crossbows, hacked to pieces while flying on brooms, beheaded by farm implements, burned — everything but melted.

Writer-director Tommy Wirkola "updates" the Grimm Brothers fairy tale first by showing the original, in which a young brother and sister are abandoned in the forest by their father, find a house made of gingerbread and candy, and are instantly imprisoned by the witch therein. She fattens Hansel on sugary treats (to snack on him later) while trying to sacrifice Gretel because the girl’s heart will give her special powers. They break loose and roast said witch in her oven.

Evidently, this gives them a career goal, and the scenario quickly shifts to grown-up Hansel (Jeremy Renner) and Gretel (Gemma Arterton), clad in tight black leather as heavily armed mercenaries. With their arsenal of advanced weaponry, they clear out that old black magic from around medieval Augsburg, Germany, and rescue accused witch Mina (Pihla Viitala) from a Salem-type mob of dentally challenged peasants.

If there’s witch-hunting to be done, it has to be by professionals, and, the siblings insist, "The only good witch is a dead witch."

They contend with loutish Sheriff Berringer (Peter Stormare) and their arch-enemy Muriel (Famke Janssen), leader of the "dark witches." They have to stop her before the coming of the "blood moon," which involves the sacrifice of children by a coven of plug-uglies on a mountaintop.

They also have to deal with their abandonment issues, their mother having been a "white witch," Hansel’s diabetes from all the sugar he consumed as a child, and his attraction to Mina. The result is more a noisy, numbing, immoral assault than a viewing experience.