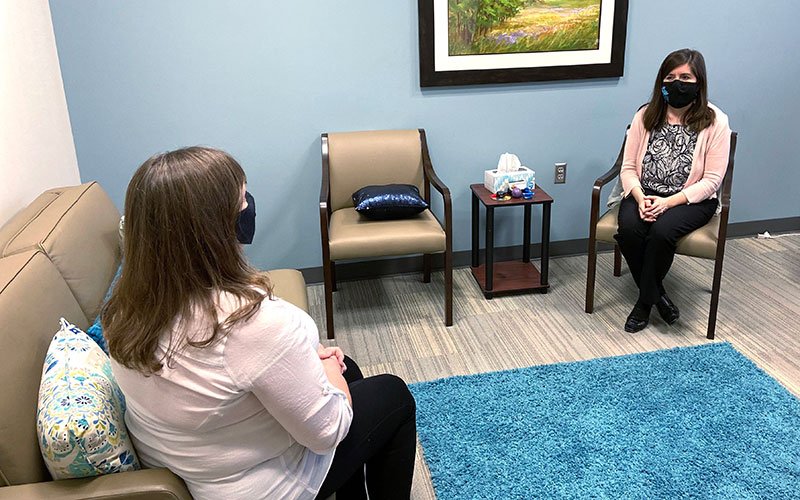 Monica Palmer, senior director of Clinical and Legal Services, and Aimee Ryan, director of Social Work, at Catholic Charities in Oklahoma City, illustrate how they provide in-person counseling amid the coronavirus pandemic in this undated photo. The old stigmas against mental illness have begun to weaken and people acknowledge that asking for professional assistance is a constructive way to deal with the angst and unhappiness that plague our society today. (CNS photo courtesy Catholic Charities, Archdiocese of Oklahoma City)

This is the first in a four-part series on emotions. This week’s issue discusses happiness.

Is America’s collective teeth grinding an indication of its happiness level?

A Twitter user mentioned how badly she grinds her teeth in her sleep. A torrent of responses replied, detailing clinching, grinding, mouth guards, cracked, broken teeth and worn-down enamel, a tale of angst born out in the night.

A more scientific look at the state of our happiness is a recent study from the Centers for Disease Control and Prevention that said that even before the COVID-19 pandemic, in 2019, a survey revealed that 36.7% of high school students reported persistent feelings of sadness or hopelessness, with those numbers much higher for lesbian, gay and bisexual adolescents.

By June 2021, another survey revealed those feelings of sadness and hopelessness had mushroomed to 44.2%. And nearly 20% of youth surveyed had seriously considered suicide.

The Merriam-Webster Dictionary defines “happiness” as “a state of well-being and contentment: joy.”

There are the usual suspects: the isolation, fear and death caused by the pandemic; the overuse of social media; the breakdown of the family; the onslaught of bad environmental news and political polarization. All of these contribute to our troubled state of mind.

And there’s another possibility that can’t be overlooked. As a country, we’re moving away from organized religion. People often claim to be “spiritual but not religious” but without the help of a faith community, they often neglect that spiritual side or aren’t sure where to turn for guidance.

Most mainline denominations report fewer worshippers at services, and the pandemic contributed to this trend. Once people stayed home from their usual place of worship, it sometimes became a habit, and habits are hard to break.

Wendy Everson is a licensed mental health practitioner in Omaha, Nebraska. She gives each of her clients a survey to find out what they are looking for and what brings them contentment. She urges them to spend more time with the things that bring them joy and peace.

“I try to work with their strengths. Where do you find joy and happiness? When was the last time you’ve put time into that activity?”

Part of her survey asks about a client’s spiritual life. How important is their relationship to God, and what is getting in the way of it?

Most claim to believe in God and have various reasons for stopping their involvement in a faith community. Sometimes it’s a Sunday job or children’s activities. Although the pandemic played a role, Everson said she sees many people who continued to worship online.

The majority of Everson’s clients are between the ages of 25-45, an age group where people feel freer than older adults to question the church in which they were raised. Many still have strong reactions to the clergy sexual abuse scandal, and many former and practicing Catholics have difficulty with the church’s views on LGBTQ issues.

Everson said connection to a faith, a higher power and spirituality found through singing, prayer, Scripture, nature — all of these can contribute to mental health.

“When people are struggling, what do they have to lean on?” she asks.

COVID-19 played a tremendous role in the stress people are feeling, said Everson.

“From my perspective, the family dynamic was affected. Parents were stressed, working virtually with children learning virtually. It did a number on the family.”

Because COVID-19 brought on more stress, “it exacerbated and accelerated couples’ problems. People weren’t socializing or getting away from each other.”

People can build community in different ways, said Everson, and this is important for mental health. Even connection to a group of friends is vital.

Everson said her requests for help shot up in September and into October 2021 when people were beginning to feel that “this pandemic should have been over months ago.”

Although Everson does not work with children or adolescents, several in her practice do, and they’ve seen the number of calls for help climb dramatically.

The old stigmas against mental illness have begun to weaken and people acknowledge that asking for professional assistance is a constructive way to deal with the angst and unhappiness that plague our society today.

In the months ahead, COVID’s aftermath, and the fear of new variants, will continue to challenge society. The world situation and the war in Europe, the economic stress on families — all of these loom large. People of faith might ask, How dynamically will the church respond to the very real needs of people searching for joy in troubled times?

Tags: Health
Copyright © 2023 Catholic News Service, Inc. All rights reserved. Linking is encouraged, but republishing or redistributing, including by framing or similar means, without the publisher's prior written permission is prohibited.