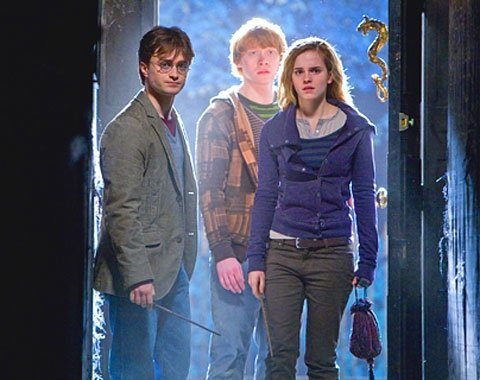 NEW YORK (CNS) — The Hogwarts gang is on the run in "Harry Potter and the Deathly Hallows: Part 1" (Warner Bros.), the penultimate film in the wildly successful franchise based on J.K. Rowling’s fantasy novels. As in Rowling’s final volume, the tone here is darker, the action more intense, and the violence intended to shock as the forces of good and evil are set on their inevitable collision course.

"These are dark times, there’s no denying," intones Minister of Magic Rufus Scrimgeour (Bill Nighy) as the film opens. And how. The Ministry has been taken over by Death Eaters, loyal to the evil Lord Voldemort (Ralph Fiennes). Their mission is twofold: Rid the world of Half-bloods (part witch, part nonwitch or "Muggle") and their supporters, and find Harry Potter (Daniel Radcliffe, of course), the "Chosen One."

No one is safe, not even a kindly Hogwarts teacher fond of Muggles. She is brutally tortured, then murdered by Voldemort and fed to a giant snake in one of the many intense moments that would have younger viewers diving under their seats.

But the main focus is Harry, and his loyal pals Hermione (Emma Watson) and Ron (Rupert Grint), who rally to his side.

As in the previous films, the special effects are thrilling, from whiz-zoom broom rides in the skies to the elaborate set-pieces of the Ministry of Magic.

Casting spells that enable them to travel instantaneously from place to place, Harry, Hermione and Ron jump all over the real world, from Piccadilly Circus in London to the Scottish Highlands. Director David Yates (a veteran of two previous Harry Potter films) offers a picturesque travelogue of the British Isles that is a soothing respite from the film’s otherwise relentless clashes.

Their travels are not just about escaping Voldemort; our trio is in search of items that can destroy the Evil One, including the titular "Deathly Hallows," three items that, together, make one "Master of Death."

Here, "Harry Potter and the Deathly Hallows" ventures into "Lord of the Rings" territory. Like Frodo Baggins, Harry — all grown up and accepting his destiny — embarks on a perilous journey to rid the world of evil. But, also like Frodo, Harry is tempted by darkness, as are his friends.

The film offers lessons about perseverance, loyalty, friendship, and self-sacrifice as it builds to a cliffhanger climax.

Rowling’s novels are famously irreligious, yet "Harry Potter and the Deathly Hallows" has some welcome, pseudo-Christian moments. Returning to Harry’s birthplace in search of clues, Harry and Hermione find themselves outside a church on Christmas Eve. They listen wistfully to the hymns sung within, thinking of happy family moments of long ago.

Similarly, Ron finds his way back to his friends on Christmas Day, when a mysterious light appears, directing him to the source of all good.

Less welcome is an incident that sees one of Harry’s friends and protectors wounded by a Death Eater, who leaves a gaping hole in his head. The victim exclaims, with a grin, "I’m a saint. I’m hole-y. Get it?"

The magical elements in the script are benign, serving to support the plot, not endorse the evils of sorcery. The romantic tension of earlier films takes a back seat to the action this time, with a few exceptions: stolen kisses, close dancing, and a peculiar fantasy scene, invented by Voldemort, showing Harry and Hermione implicitly nude and about to have sex — all designed to enrage Ron, which it does.

The film contains much action violence with frequent peril, brief partial nudity in a sexual context, scenes of murder and torture and a few vaguely sexual references. The Catholic News Service classification is A-III — adults. The Motion Picture Association of America rating is PG-13 — parents strongly cautioned. Some material may be inappropriate for children under 13.