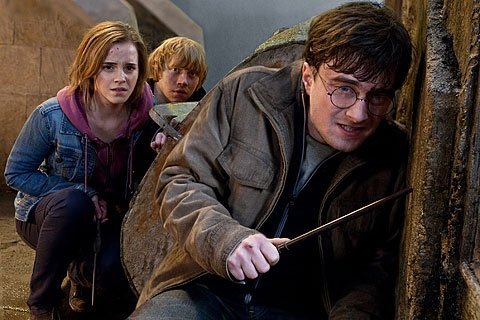 NEW YORK (CNS) — One of the most successful movie franchises of all time goes out in style with "Harry Potter and the Deathly Hallows: Part 2" (Warner Bros.).

Though this eighth installment in the series that began with 2001’s "Harry Potter and the Sorcerer’s Stone" may bewilder newcomers — if there are any of the uninitiated left, they will not find themselves mollycoddled by patient exposition — director David Yates provides a gratifying wrap-up to a decade of blockbuster adaptations.

Based, like its immediate predecessor, on the last volume of J.K. Rowling’s run of phenomenal best-sellers, Yates’ fantasy is too intense for the youngest viewers. But scenes of combat, although frequent, are mostly bloodless, while the dialogue is marked by only one mildly improper turn of phrase, making this climatic adventure acceptable for most other age groups.

As the titular wizard (Daniel Radcliffe, needless to say) continues to battle his nemesis, evil Lord Voldemort (Ralph Fiennes), the epic struggle brings Harry’s innate courage to the fore but also tests his willingness to sacrifice himself on behalf of others.

At Harry’s side once again are pals Ron (Rupert Grint) and Hermione (Emma Watson) — friends acquired, of course, during his student days at the Hogwarts School of Witchcraft and Wizardry. Once the scene of happier proceedings, during the tenure of its late headmaster, Albus Dumbledore (Michael Gambon), Hogwarts is currently under the apparent misdirection of Dumbledore’s enigmatic successor, Severus Snape (Alan Rickman).

Many of symbols deployed and themes highlighted in Rowling’s narrative echo Scripture and comport with Judeo-Christian beliefs. Voldemort, for instance, is constantly accompanied by his pet snake Nagini, a slithering embodiment of wickedness.

Similarly, Voldemort’s ambition to obtain immortality though illegitimate means parallels the serpent-inspired temptation to which Adam and Eve gave way. And here, as in salvation history, a path to redemption is opened by self-surrendering love.

As with many a time-honored tale — ranging from "The Wizard of Oz" to "The Lord of the Rings" trilogy penned by devoutly Catholic novelist J.R.R. Tolkien — the element of sorcery in Rowling’s story serves merely as a fictional device and a stimulant to the imagination.

Even impressionable audience members are as unlikely to think that the wands and spells they see in use on screen are things to be dabbled with in the real world as they are to believe that they may someday graduate from Hogwarts.

Like a poignant graduation ceremony, this final chapter in the adventures that have taken Harry — and many of his fans as well — from childhood to full maturity manages to strike notes both elegiac and exciting, thereby bringing to an apt conclusion one of the iconic sagas of recent years.

The film contains much action violence, brief gory images and a single crass term. The Catholic News Service classification is A-II — adults and adolescents. The Motion Picture Association of America rating is PG-13 — parents strongly cautioned. Some material may be inappropriate for children under 13.