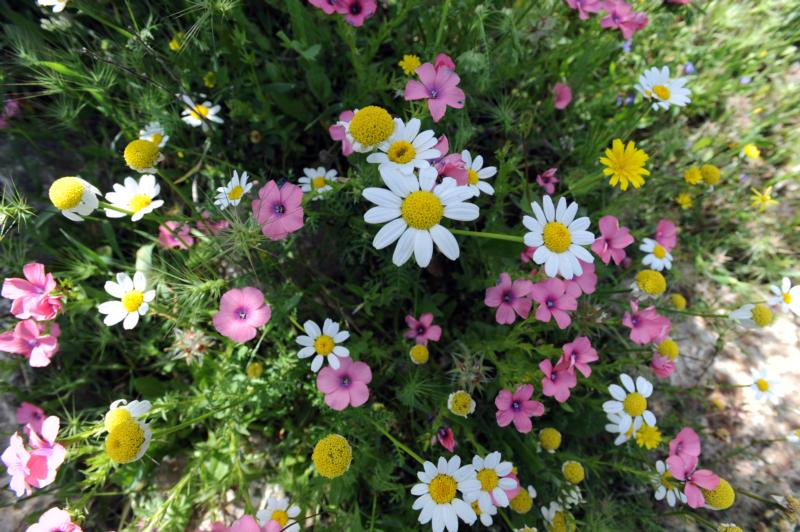 Wildflowers bloom on Mount Precipice in Nazareth, Israel, believed to be where Jesus was led to after being rejected in Nazareth (Lk 4: 29-30). (CNS photo by Debbie Hill)

If Lent is a time for reflection, service and sacrifice, and drawing closer to God, Easter follows with a stunningly wonderful message of joy and love that reflects in our liturgies throughout the world. A palpable, audible “Alleluia!” sung and prayed over and over. No matter if each note isn’t perfect, the chorus raised is magnificent!

Yet, for many people, feeling uplifted might seem more forced than natural. Any number of life challenges can weigh heavily against the utter joy that is Easter, and putting aside the burdens of illness, caregiving, economic hardship or other pressures can make it difficult for those burdened to connect with the gladness permeating our faith families.

For anyone who feels detached from the season’s celebration, there is, still and abiding, a particular passage in the Gospel that provides a way in to Easter joy.

It speaks directly to those sorrowing, troubled or feeling there is something wrong with them if they don’t seem to be able to set aside their burdens to rejoice as easily as others do. It reaches out and brings the gift of renewed faith and presence of God’s love home to all.

We sometimes forget that the disciples of Jesus did not understand what he had told them about his death and resurrection. So in the wee hours of the morning, when Mary of Magdala and others came to the tomb, they were heavily burdened — mourning Jesus’ awful death. Joy, celebration, singing the wonders of God’s promise fulfilled — these happy emotions were far from their hearts.

When they arrived at the tomb, they had even more cause for trauma — the stone was rolled away from the tomb, and Jesus’ body was missing. Mary’s words to Simon Peter and another disciple are far from joyful: “They have taken the Lord from the tomb, and we don’t know where they put him” (Jn 20:2).

And, reading on beyond the Easter Sunday Gospel, after Simon Peter and the other disciple come and see for themselves, but do not “understand the Scripture, that (Jesus) must rise from the dead,” (20:9), Mary remains “outside the tomb weeping” (20:11).

Mary of Magdala’s steadfastness for Jesus reflects in her constancy. She cannot move from the open tomb, does not stop weeping; her love pours forth even as her heart must have been so very heavy. And then, Mary’s life of pain becomes something very different.

Angels appear, questioning why she weeps. Then, Jesus himself appears. At first, Mary thinks he is the gardener and boldly asks that, if he is the one who removed Jesus’ body, to tell her where he laid him (20:15)!

Jesus spares Mary further sorrow. He calls her by name and instructs her to carry the news to his disciples, and she does. She has seen the Lord! He is risen!

Even after seeing the risen Jesus, Mary of Magdala must have had other difficult moments. How hard it must have been, for example, to convince others of Jesus’ resurrection. But in witnessing as she did, even through tears, her life became completely wonderfully new.

Sometimes, we have to sit weeping at the open tomb for a time, bringing ourselves into the presence of the mystery of our faith with the realities of life that weigh us down. All around us might be praising to the rafters, leaving us to feel a little lost.

But as we remain ever-constant, the risen Jesus visits us, loves us, calls us by name. And as we witness to him, although difficulties continue, our life, too, is changed — shining new, graced with immense love and heartfelt joy.