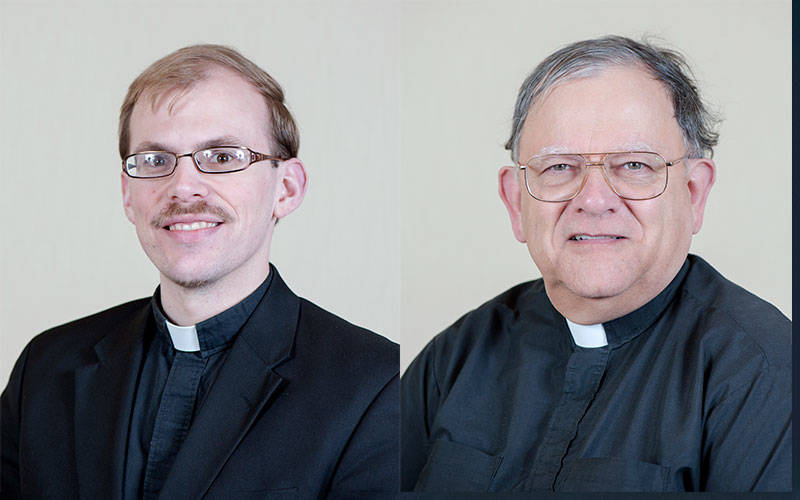 Father Louis Sirianni (right) will step down Sept. 1 as judicial vicar for the Diocese of Rochester’s Tribunal. He will be replaced by Father Peter Mottola (left). (Courier file photos)

After 25 years at the helm of the Diocese of Rochester’s Tribunal, or church court, Father Louis Sirianni will step down from his post as judicial vicar Sept. 1. His successor will be Father Peter Mottola, who will assume the role in addition to his current responsibilities as pastor of Rochester’s Peace of Christ Parish.

“I’m happy to help the work of justice move forward in the diocese, and to carry on Father Sirianni’s good work,” remarked Father Mottola, who earned his degree in canon law from Catholic University of America in 2016.

Yet the transition does not mark the end of Father Sirianni’s work with the tribunal, which has spanned four decades. He will continue as adjutant judicial vicar, helping Father Mottola adjust to his new role and sharing some of the workload.

The tribunal deals primarily with marriage-annulment cases. When an individual who was married in the Catholic Church desires an annulment, he or she petitions the tribunal and presents the reasons he or she believes the marriage is invalid.

“Church law specifically says all marriages that are celebrated properly — for a Catholic, that means according to church law — are presumed to be valid, and it’s the burden of the petitioner to show why it might not be valid,” Father Sirianni said.

After investigating those reasons, a judge will determine whether the marriage was valid according to church law, he added.

Father Sirianni’s work with the tribunal began in the early 1980s, when he was one of several priests trained to work on marriage-annulment cases. His responsibilities grew over time, and in 1992, then-Bishop Matthew H. Clark asked him to pursue a degree in canon law in order to take on a larger role.

“After a lot of prayer and reflection, I thought, ‘OK, why not?’” Father Sirianni recalled.

In the fall of 1993, Father Sirianni enrolled at St. Paul University in Ottawa. After two years of study, he earned his licentiate in canon law and began working as a judge for the tribunal. In January 1996, he was appointed adjutant judicial vicar for the tribunal, and in June of that year, moved up to become its judicial vicar.

In 2005, Father Sirianni became pastor at St. Mark Parish in Greece. He served dual roles at the parish and the tribunal until he gave up parish administration in 2019 and became parochial vicar at St. Mark. He remained judicial vicar and said he has enjoyed the work but is ready to take another step back.

“I love the investigation, doing the research work on the cases. I love working with the people on staff here, and most of our clients, but I hate making a decision at the end, because I know somebody isn’t going to like it,” he said.

The process of investigating a case involves talking to both the petitioner and the other party, if possible, as well as interviewing witnesses, Father Sirianni explained.

“We’re looking to see whether there was something at the beginning that most people were not aware of that, had we been aware, would have invalidated it right there,” he said.

If one of the parties was not of age or not baptized, for example, that would mean the marriage was not valid, Father Sirianni said.

“Other times you have to go deeper into the law. Some of them deal with psychological issues, honesty issues. Perhaps people lied about their understanding of the permanence of marriage, or something like that,” he said.

Most divorced people who petition for annulments are seeking to either remarry or have a second civil marriage validated in the Catholic Church. But others are pursuing the priesthood or religious vocations, and a few simply want to gain closure, he said.

He emphasized, however, that the outcome of an annulment case has no effect on the legitimacy of a couple’s children, he said.

“People think that if their marriage is declared invalid, then the children of that marriage are illegitimate. That’s not true,” Father Sirianni said.

Another common misconception is that petitioning for an annulment is expensive, but that’s also not true, he added. The diocese does not assess any fees, except for in the instance of certain cases that must be forwarded to outside courts.