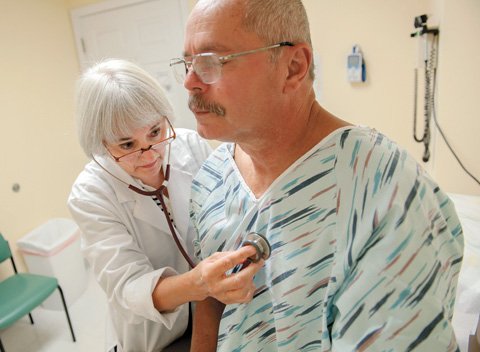 Ginger Krebbeks, a nurse practitioner, examines patient Miguel Berrios Aug. 26 at St. Joseph’s Neighborhood Center in Rochester. The center is gearing up to help patients as provisions of the Affordable Care Act are implemented.

All New Yorkers have some health-plan homework to complete this fall, according to Sister of St. Joseph Christine Wagner, executive director of Rochester’s St. Joseph’s Neighborhood Center.

She said New Yorkers should study up on their insurance options because the state’s new health-care exchange marketplace will enroll people from Oct. 1, 2013, to March 31, 2014, with coverage beginning Jan. 1, 2014.

The new health-care exchange marketplaces were established as part of President Barack Obama’s 2010 Patient Protection and Affordable Care Act, which is often called Obamacare. Using the help of a third-party assistor or navigator, individuals can apply to receive health insurance through the state’s exchange.

Sister Wagner said the biggest mistake people can make is to not pay attention to the health-care exchange or to think the exchange does not apply to them because they have insurance through their employers.

"People are just realizing that the Affordable Care Act is going to affect them," Sister Wagner remarked.

When seeking coverage through the exchange, individuals who make up to $45,960 and families of four making up to $94,200 may qualify for federal tax credits to help reduce insurance costs. During 2014 and 2015, small businesses of 50 or fewer employees may qualify for federal tax credits of up to 50 percent of expenses to offset the cost of providing coverage to their employees through the exchange. Questions can be sent to exchange@health.state.ny.us.

Other low-cost insurance plans will remain in effect, including New York’s Child Health Plus program, which covers kids in families with incomes of up to 400 percent of the federal poverty level. New York also will expand its Medicaid coverage on Jan. 1, 2014, to cover adults earning up to 138 percent of the federal poverty level. The exchange’s assistors will help people determine if they or their children would qualify for Child Health Plus or Medicaid and assist them in signing up for those programs through the exchange.

"Go to the New York state exchange website (www.nystateofhealth.ny.gov) and read everything you can," Sister Wagner advised. "Don’t be afraid to ask questions and take advantage of the assistance that insurers are offering."

Sister Wagner said this year many employer-provided insurance plans will be changing with the advent of several other Affordable Care Act provisions that will be implemented in 2014.

"Insurance companies are going to have to change and adapt, and everybody is in uncharted territory," she said.

Also in 2014, the state’s HealthyNY individual plans will cease to exist, and people who have received insurance through them will need to transition to a plan offered though the exchange.

Some people are exempted from the mandate to buy insurance, including those who are incarcerated, undocumented, members of a religion opposed to accepting benefits from a health-insurance policy, members of a Native American tribe and those whose family income is below the threshold for filing a tax return, the foundation notes. Children and young adults may be able to avoid paying a penalty by purchasing low-cost catastrophic insurance coverage that would provide coverage in the case of a health crisis.

Rather than pay the penalty, many people who are required to purchase insurance may find better deals on the exchange marketplace, according to Fidelis Care, the New York state Catholic health plan started by the state’s Catholic bishops as a way to provide access to affordable health insurance for all. Fidelis is one of the 17 insurers to offer health plans through New York state’s exchange.

Father Patrick J. Frawley, president and CEO of Fidelis Care, said Fidelis views the exchange as an extension of its mission and ministry.

"Sadly over our history we’ve encountered many people who do not qualify (for public insurance programs) based on income levels," Father Frawley said. "The exchange is a tremendous opportunity for us to provide additional coverage."

Fidelis Care already offers free or low-cost health insurance through the state programs Child Health Plus, Family Health Plus and Medicaid Managed Care, and it insures more than 900,000 children and adults of all religions in 59 counties statewide.

Although plans offered through the exchange are mandated to provide a "family planning" benefit with coverage for artificial birth control, Father Frawley noted that under a long-standing policy, Fidelis Care contracts with an independent third party to provide beneficiaries with access to services without Fidelis Care taking money on behalf of the services.

"We do not directly take money or get paid for or provide for those services," he stated.

Most of Fidelis’ existing providers have agreed to participate in the exchange, said David Thomas, the agency’s executive vice president and chief operating officer . Thomas said preparations for the roll out of the exchange started about a year ago, and Fidelis Care created a new division to develop its exchange product. Its information technology, marketing, training and call center staff are among those who have been working to prepare for the Oct. 1 open enrollment launch.

Fidelis Care has budgeted for accepting about 24,000 exchange members, but Father Frawley noted the organization has the capacity to accept many more than that if the demand is there.

"We see this as a tremendous opportunity to enrich the lives of individuals, so that an individual doesn’t have to wait until the last minute to go to the doctor," Father Frawley said. "Peace of mind is another way we can ensure people are afforded dignity and respect."

But will the advent of the health-care exchange marketplace spell the end of St. Joseph’s Neighborhood Center, which primarily serves the uninsured?

Sister Wagner said it’s not likely, because there will still be many uninsured people after the exchange begins enrolling people.

"We are currently getting 50 calls a week from people who don’t have health insurance," she said. "That really speaks to the community need."

She said the center plans to assist its roster of 1,500 patients in securing insurance through the exchange and to transition them to primary care doctors in the community.

"We will make sure people have a primary care placement to go to before they leave us," Sister Wagner said, noting that there also is a shortage of primary care doctors in the community.

For various reasons many people will not be able to take part in the exchange, she said. The neighborhood center will continue to serve those who fall through the cracks, including those who are undocumented immigrants and those who do not have the ability to pay insurance premiums, even with available subsidies.

Among others who might need services are those who cannot complete health insurance applications because of denials from the IRS, which will verify income reports, or due to mistakes or technical errors on their applications or at the state level. Those who lose coverage and cannot reapply until the next annual open enrollment period also may need health-care services in the interim, as may those who only have catastrophic coverage or who are dependents of people in the country on work and study visas and who are ineligible to purchase insurance through the exchange.

"We’re thinking of some ways to financially handle the different situations people present to us," Sister Wagner said.

Sister Wagner said the neighborhood center is aiming to be there for people in case of such situations as computer glitches.

"You just don’t start up a system like this and expect it to work 100 percent of the time. Our doors will be open to those people experiencing difficulties due to technical problems," she said.

The center’s emphasis may change in the future, she noted, based on what demand it sees in the community. It may transition to focusing on providing services that exchange plans do not cover, such as adult dental coverage or certain mental-health services.

"We will remain as nimble and flexible as we can," Sister Wagner said.