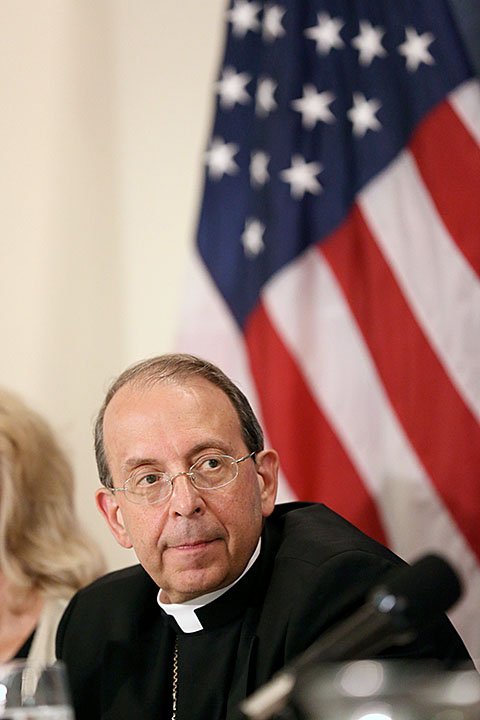 Archbishop William E. Lori of Baltimore addresses a news conference in Washington in July. As chairman of the U.S. Conference of Catholic Bishops' Ad Hoc Committee for Religious Liberty, he has been at the forefront of the bishops' opposition to the Affordable Care Act's contraceptive mandate for employers and to what the bishops see as a too-narrow exemption for religious employers.

WASHINGTON (CNS) — The Affordable Care Act, signed into law in 2010, was a major topic of discussion throughout 2013, when some of its provisions began to take effect.

The federal government’s trouble-plagued website frustrated the general public and the law’s final rules for implementing its contraceptive mandate applying to most religious and other employers did not satisfy the U.S. Catholic bishops, who repeatedly criticized the mandate and its narrow religious exemption, saying it erodes religious liberty rights.

When the federal government rolled out its website — healthcare.gov — in October, allowing people to shop for insurance coverage, the frustration with technical glitches on the site likely raised the national blood pressure levels.

On Dec. 1, the U.S. Health and Human Services Department announced that the worst of the website’s problems have been fixed, but said there were still some software bugs in the system.

To help people through the maze of understanding the law and shopping for and buying health insurance, the federal government provided more than $67 million in funds to more than 100 organizations to train navigators and counselors.

St. Louis-based Ascension Health received two of the federal grants distributed to Via Christi Hospital in Wichita, Kan., and Providence Hospital in Mobile, Ala.

Connie Brooks, a senior director for Ascension Health, said the grants "allow us to do more of what we do," stressing that Catholic hospitals are "very much committed to and compassionate about care for the poor and access to health care; it is at the core of who we are."

Catholic Social Services in the Archdiocese of Mobile, Ala., was awarded a navigator grant of $20,750, but ended up rejecting it.

Father Fredrick Adamson, vicar general of the Phoenix Diocese, advised Catholics there, in a letter sent to all parishes this fall, not to be navigators for the new health care law.

The priest’s letter included a link to the National Catholic Bioethics Center in Philadelphia, which urged Catholic agencies not to sponsor or assume assistance roles with the health care law "because of the implications of these actions for cooperation with evil."

The center cautioned against such help "not just because of the morally illicit drugs and procedures which will be facilitated by implementing" it but also "because of the violation of religious liberty" in the law’s contraceptive mandate.

The mandate was a major problem with the health care law for the U.S. bishops from the start and remained one even after HHS made an accommodation for religious employers and finalized its rules.

The bishops, who have long advocated for health care reform, were against final passage of health care measure because of its use of federal funds to pay for elective abortions and its failure to protect conscience rights for workers in the health care industry and for employers who have moral objections to the law’s requirement that most religious and other employers provide free health coverage of contraceptives, sterilization and abortifacients for their workers.

The final rules issued in June to implement the mandate include an exemption for some religious employers that fit certain criteria.

For nonprofit religious organizations — including charities, hospitals and universities — that do not fall under the exemption but are morally opposed to providing the coverage, HHS has stipulated an accommodation: The coverage will be provided separately through health insurance companies or third-party administrators who must ensure that payments for contraceptive services come from outside the objecting organization’s premiums.

But the U.S. bishops and many Catholic universities and institutions argue the accommodation still does not solve their objections to being involved in providing coverage they reject for moral reasons.

Currently, there are more than 70 lawsuits against the mandate filed by Catholic and other religious entities and some for-profit companies working their way through the courts.

The U.S. Supreme Court agreed Nov. 26 to take up two cases that challenge the contraceptive mandate of the law for secular, for-profit businesses whose owners object to all or part of the mandate on moral grounds.

At issue in both cases will be First Amendment arguments that a federal requirement that the owners of the companies provide insurance coverage they morally oppose violates the owners’ Free Exercise rights as well as their rights under a 1993 law, the Religious Freedom Restoration Act.

Archbishop William E. Lori of Baltimore, chairman of the U.S. Conference of Catholic Bishops’ Ad Hoc Committee for Religious Liberty, said the court’s review "highlights the importance of this conflict between the federal government and people seeking to practice their faith in daily life."

At the congressional level, Boston Cardinal Sean P. O’Malley urged members of Congress in early November to support the Abortion Insurance Full Disclosure Act, a measure that would require health plans to disclose if they subsidize abortion coverage.

The cardinal, who is chairman of the Committee on Pro-Life Activities for the USCCB, said the legislation would address one part of the abortion-related problem in the Affordable Care Act.

He noted that under the federal health care law — unless state law requires otherwise — each insurer may choose whether to include coverage of elective abortions in health plans it offers on a state health exchange. He also pointed out that if the insurer does cover such abortions, the overall health plan may still receive federal tax subsidies, which he said violates the policies governing all other federal health programs.

In other court actions related to the health care law and the Catholic Church, a federal judge Nov. 21 granted the Pittsburgh and Erie dioceses a preliminary injunction against the law’s contraceptive mandate, saying religious employers’ right to adhere to their moral objections outweighs a government decision to widen access to contraceptives.

Archbishop Joseph E. Kurtz of Louisville, Ky., USCCB president, said the court’s decision vindicates the approach the bishops have taken on the issue and he expects similar court decisions to follow.

The archbishop noted that during the bishops’ annual fall general assembly in Baltimore in November, they reiterated their objections to the Affordable Care Act’s contraceptive mandate and their "resolve to resist this heavy burden and protect our religious freedom."