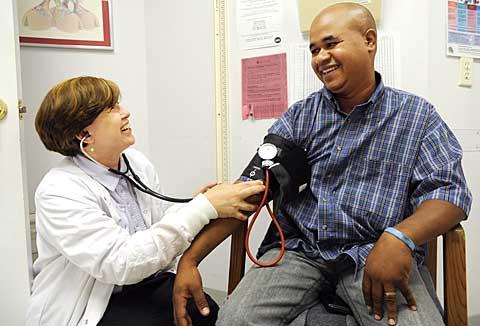 More than three months have passed since President Barack Obama signed the Patient Protection and Affordable Care Act into law on March 23. As 2010 progresses, some of the bill’s first reforms will be implemented. But if you don’t know which reforms are on their way toward becoming reality, you’re certainly not alone.

"There’s so many moving parts with this (legislation) that it is very easy to get lost," said Denis Sweeney, director of marketing and community development at St. Joseph’s Hospital in Elmira.

For much of 2009 and the first quarter of 2010, it was nearly impossible to go anywhere without hearing about health-care reform. Congress had spent months debating the merits of numerous proposals, and the media had covered the issue from a multitude of angles by the time Congress and Obama settled on a reform bill in late March.

The resulting legislation has many facets and contains more than 100 reforms, which are expected to be implemented during the next five years. The reforms cover a wide variety of issues, from insurance, Medicaid and Medicare to prescription drugs and medical malpractice.

The Henry J. Kaiser Family Foundation has attempted to erase some of the confusion surrounding health-care reform by producing a timeline (www.kff.org/healthreform/8060.cfm) that provides implementation dates for key provisions of the law. According to that timeline, at least 30 of the bill’s provisions are expected to be in place by the end of 2010. One of them calls for a temporary, national high-risk insurance pool that will provide health coverage to individuals with pre-existing medical conditions. This should be coming into reality relatively soon, Sweeney said, and will directly affect many of the people St. Joseph’s treats each year.

Also starting this year, insurance companies will be barred from discriminating against children based on pre-existing conditions, and new health plans must provide free preventative care and checkups for adults and children alike, according to the Kaiser Family Foundation. Employers with fewer than 25 employees will be eligible for tax credits to subsidize health insurance for their employees, and senior citizens receiving Medicare will be eligible for free preventative care, such as health screenings.

One of the first provisions that will go into effect stipulates that, as of Sept. 23, parents will be able to keep their young-adult children on their health-insurance policies until those children turn 26. There are some restrictions, so interested individuals should contact their insurance companies to determine whether they qualify. Some insurance companies are providing this dependent coverage prior to Sept. 23 for individuals who would otherwise lose coverage by aging off their parents’ policies before Sept. 23, according to the Kaiser Foundation.

Local observers were quick to welcome this provision.

"The young-adult population, I think, is one of the most problematic in terms of either (the) uninsured or underinsured, because they generally are healthy and don’t feel it’s worth it to go buy a policy in the open market because it’s so expensive," said Brigit Hurley, parish social-ministry coordinator for Catholic Family Center and assistant campus minister at SUNY Geneseo.

Young adults also tend to perceive themselves as immortal, noted Sister Christine Wagner, executive director of St. Joseph’s Neighborhood Center in Rochester. The center, sponsored by the Sisters of St. Joseph, offers free or low-cost health-care services. Seventy-four percent of the center’s patients are between the ages of 21 and 55, Sister Wagner said, and a significant share of patients are young adults in their 20s and 30s.

Many young adults have aged off their parents’ insurance policies and are between jobs. Others are working, but either their employers do not offer health insurance or they can’t afford to purchase it, Sister Wagner said.

At 23, Katherine McCarty belongs to the target population for this provision. Yet, while she’s grateful for the coverage and the money it may save her, she said she also feels this provision is not helping young adults become grown-ups.

"I think in a way it kind of delays when people are expected to be adults," McCarty said. She said she would have preferred that the government tackle the prohibitively high prices of many insurance policies and make health insurance affordable, rather than classifying young adults as dependents for a longer period of time.

St. Joseph’s Hospital treats its fair share of uninsured young adults, Sweeney noted. Legally the hospital must treat any emergency cases it receives, regardless of whether those patients can pay for their care, and the hospital takes pride in its commitment to heal all of its patients in body, mind and spirit. Nonetheless, the hospital bears a financial burden when it treats people who don’t have insurance, Sweeney said.

"With the uninsured, we don’t receive any reimbursement for services that we offer," he said.

The hospital’s expenses related to bad-debt and charity cases have risen continuously over the years, totaling nearly $4.5 million in 2008, according to the hospital’s 2008 Annual Report and Community Benefit Plan. If more young adults — and more patients in general — had insurance, the hospital’s financial burden would decrease, Sweeney said.

Health-care reform "will positively impact us in that regard because instead of having to absorb the loss we will at least get some type of reimbursement," he said.

Under the Patient Protection and Affordable Care Act, all citizens and legal residents will be required to have health insurance by 2014, according to the Kaiser Family Foundation. Medicaid will be expanded to include low-income children, pregnant women, parents and adults under age 65 without dependent children, and low-income individuals and families will be eligible for federal tax credits. These tax credits may be used to purchase insurance through state-based insurance exchanges.

This aspect of the health-care reform legislation will have the greatest impact on the most patients treated at St. Joseph’s Neighborhood Center, Sister Wagner said. Many such patients are the working poor who hold down two or three jobs, but still can’t afford insurance or don’t have access to it. Many of these patients have heard these changes are coming, but won’t really believe it until they see the reforms implemented, she said.

"I think there’s great hope that something is going to change," Sister Wagner said.

While the U.S. Conference of Catholic Bishops has expressed pleasure about the legislation’s potential to help millions of uninsured and underinsured Americans, it maintains that the bill is "profoundly flawed in its treatment of abortion, conscience rights and fairness to immigrants," according to a May 20 letter to members of the U.S. House of Representatives from Cardinal Daniel N. DiNardo, head of the USCCB’s Committee on Pro-Life Activities.

The bishops are concerned because the Patient Protection and Affordable Care Act does not prohibit the use of federal funds to pay for abortions. For years the Hyde Amendment, which is passed as a rider to the annual U.S. Labor/Health and Human Services/Education appropriations bill, has blocked federal funding of abortions in major health programs, except in cases of rape or incest or instances when the mother’s life is in danger.

Under the new health-care reform legislation, however, federal funding could be used to provide health-care services in a much more indirect way — such as through health-care subsidies and services provided at community health centers — and would not be subject to the restrictions of the Hyde Amendment, Armantrout said.

Cardinal Francis E. George, USCCB president, also maintained in a March 23 statement that the reform legislation did include the necessary conscience-protection language that would protect from discrimination those individuals and institutions that refused to participate in abortions.

On March 24, Obama signed an executive order ordering the Hyde Amendment restrictions and current conscience-protection laws to apply to the Patient Protection and Affordable Care Act. The bishops, however, have said this is not good enough.

"It’s an executive order and it’s not law," Armantrout explained. "When the order expires or when there is a change of leadership in the White House, there is uncertainty about whether the directives in the order would be maintained. Also, it’s unclear whether legally the executive order has the legal capacity to modify the Patient Protection and Affordable Care Act."

Although the bishops say the reform bill is flawed, they are unwilling to see it thrown out completely, thus losing any ground gained in the area of universal health care, Armantrout said. Instead, they are urging Congress to support a bipartisan bill, H.R. 5111, dubbed the Protect Life Act, which they say will address their concerns and remedy the flaws they’ve identified in the Patient Protection and Affordable Care Act.

"If the intent that was expressed at the time the (executive) order was signed was sincere, it should be codified into law," Armantrout said.

Health-care reform remains a highly political and polarizing topic, Armantrout noted, so the bishops fear that if their concerns are not addressed, opponents of universal health care will latch onto those concerns to justify throwing out the entire Patient Protection and Affordable Care Act.

Local Catholics are urged to contact their local Congressional representatives and urge them to support H.R. 5111, and to periodically visit the Health Care section of the USCCB’s website, www.usccb.org, to stay informed as the implementation of health-care reform progresses, Armantrout said.