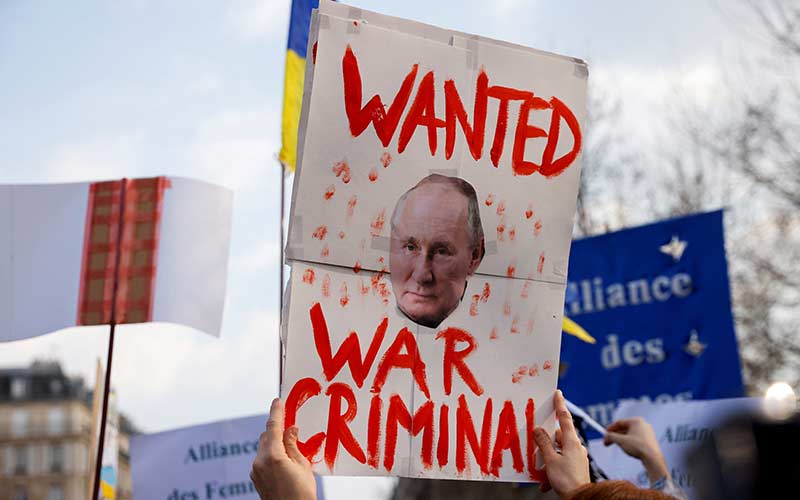 A person near the Place de la Republique in Paris holds a placard with an image of Russian President Vladimir Putin during an anti-war protest March 5, 2022, following Russia's invasion of Ukraine. (CNS photo by Johanna Geron/Reuters)

WASHINGTON (CNS) — Just a day after a U.S. House commission’s hearing on holding Russian President Vladimir Putin accountable for “war crimes and aggression against Ukraine,” his military forces carried out an airstrike on a maternity hospital in Mariupol in the East European country.

The March 9 attack, which left three people dead, including a child, and injured 17 others brought condemnation from around the world. AP reported those injured included “women waiting to give birth, doctors and children buried in the rubble.”

“You will definitely be prosecuted for complicity in war crimes,” Ukrainian President Volodymyr Zelenskyy said in a video address directed at Putin. “And then, it will definitely happen, you will be hated by Russian citizens — everyone whom you have been deceiving constantly, daily, for many years in a row, when they feel the consequences of your lies in their wallets, in their shrinking possibilities, in the stolen future of Russian children.”

In Washington, U.S. Rep. Chris Smith, R-N.J., as co-chair of the Tom Lantos Human Rights Commission, presided over the March 8 hearing, the first in the House of Representatives over holding the Russian leader accountable for his invasion of Ukraine that began Feb. 24.

“We are here to recommit to assisting Ukraine during its darkest hour and to honor those who are sacrificing their lives defending their beloved country from an unprovoked, barbaric invasion by Putin and the Russian Federation,” Smith said in opening the hearing. “We are also here to hold Putin and Russian officials to account.”

He added that those gathered for the hearing joined “the free world in honoring the extraordinary courage and tenacious leadership” of Ukraine’s president.

What is happening to Ukraine is “the largest and most lethal attack in Europe since World War II, and the world has been shocked by the massive death and destruction unleashed by Putin,” Smith said.

He compares Putin’s action’s to Adolf Hitler’s invasion of Poland in 1939, which began World War II.

“President Putin — and others responsible for this ongoing and ever-expanding mass murder, war crimes and crimes against humanity — must be held to account and prosecuted for their crimes,” the Catholic congressman added.

“The time to act for justice and accountability is now,” Smith said. “Justice delayed is justice denied.”

Smith has introduced a House resolution supporting the “investigation and prosecution of the crime of aggression and other international crimes committed by officials of the government of the Russian Federation against the government and people of Ukraine.”

The resolution also calls on President Joe Biden to direct the U.S. ambassador to the United Nations “to use the voice, vote and influence of the United States to immediately promote the establishment of an appropriate regional or international justice mechanism to investigate and prosecute possible international crimes” stemming from the invasion.

It also urges Biden to convene “the world’s democracies for the purposes of establishing such an international justice mechanism” as soon as possible.

Among the witnesses testifying at the hearing was David Kramer, managing director of global policy for the George W. Bush Institute and former assistant secretary of state for democracy, human rights and labor.

Echoing Smith, he called the current situation in Ukraine the “gravest crisis in Europe since WWII” and emphasized the importance of swift and united actions by the international community.

“The refrain ‘never again’ emerged in the wake of the Holocaust, and Ukrainians are wondering whether that pledge applies to them,” said Kramer.

Among other witnesses were David Crane, founding chief prosecutor for the U.N. Special Court for Sierra Leone, and Jane Stromseth, the former deputy to the U.S. State Department’s ambassador-at-large for global criminal justice.

Crane spoke of the need for global “leadership” to “bring the world together” and called for “a tribunal that has an appropriate mandate.”

“Strongmen around the world are watching, like crocodiles, as to what we do about the international crimes committed by the Russian invasion of the Ukraine,” said Crane.

“Let’s go and put some bad guys in jail, shall we?” he said.

Stromseth said that “international law is on our side … the question now is how the international community will respond.”

She added that “failure to stand up to those who order and commit such crimes will only embolden their sense of impunity” and emphasized “a strategy of mutually reinforcing accountability — that is, accountability through multiple complementary mechanisms grounded in the fundamental principles of international law.”

Whichever mechanism proves to be most effective at holding Putin accountable, Smith said “we’ll find a way to get it done.”

“Failure to do so would be gross negligence,” said Smith.