Hearing, responding to the call to vocation - Catholic Courier 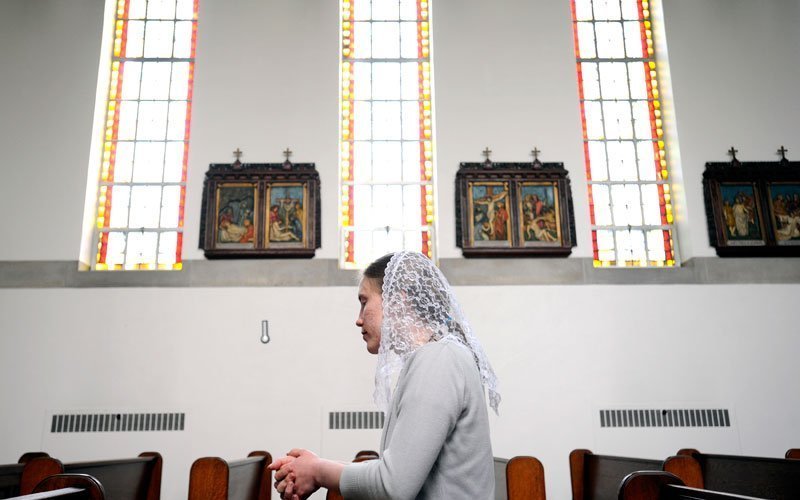 Michelle Raczka prays inside the chapel at the Carmelite Monastery in Pittsford April 26. (Courier photo by Mike Crupi)

Michelle Raczka said she felt peace when she realized God was calling her to a lifetime of service.

But it also took time and a multicity search for her to discern where she was being called to serve.

On May 30, the Webster resident will enter the Sisters of the Reparation to the Most Sacred Heart of Jesus, a small congregation of sisters based in Steubenville, Ohio.

As she embarks on her journey to becoming a woman religious — and as the Diocese of Rochester prepares to ordain priests and permanent deacons this spring — the Catholic Courier asked several people engaged in or affiliated with the vocations process to reflect on what it means to be called to a religious vocation, and how one hears God’s voice.

Raczka describes her religious vocation as a gift from God.

“Being brought up in the faith, it’s a grace, and definitely God gives the grace,” said Raczka, who has attended Webster’s Holy Trinity and St. Paul parishes and now frequently attends Mass at the Carmelite Monastery in Pittsford.

It was through her connection with the Carmelites that she learned about the Sisters of the Reparation. She had considered many different religious communities in her search to find one that felt like home. Among those she considered were the Precious Blood Sisters, the Sisters of the Merciful Jesus, an active order of Carmelites, and a contemplative order of Missionaries of Charity.

“I felt like I needed to look into something different,” Raczka said.

She said she learned more about the Sisters of the Reparation through a visit last May when she attended the Franciscan University of Steubenville’s monthly Eucharistic Festival of Praise. The sisters have a perpetual adoration and a devotion to St. Faustina Kowalska, the visionary of Jesus as the divine mercy.

“The next morning I called up the sisters and ended up going and visiting them for just a couple of hours,” Raczka said. “I was interested in their spirituality.”

Though she thought she was being called to a more contemplative order, she found these sisters do a lot of teaching at conferences and in parishes. She also believed she was bound for an urban setting, but instead she found herself feeling called to the sisters’ rural setting, open land and small farm.

“I first felt a peace about it,” Raczka said.

Father Tim Horan, director of the diocesan Office of Priesthood Vocation Awareness and pastor of St. Margaret Mary Parish in Irondequoit, described the call to a lifelong religious vocation as a rumbling at a person’s deepest level.

“It’s that part of you that cries or gets goosebumps when you experience something in yourself,” he said. “It tells you who you are at the deepest level: that is, a child of God.”

Carol Dady, coordinator of the diocesan Office of Priesthood Vocation Awareness, said other emotions may occur to discerners, including the happiness of knowing God is calling them to a vocation or a peacefulness such as Raczka felt.

Raczka said she began to realize she might be called to a religious vocation when she was a human biology, health and society major at Cornell University. After college, she worked as a nursing assistant and then as an administrative assistant in research and development at LiDestri Foods in Fairport.

But the feeling that she was being called didn’t go away — and her love for the Mass grew.

“I took that to prayer, and I really prayed about it,” Raczka said. “I went to eucharistic adoration a couple of times a week, and during that time I was praying there, and I felt like God was saying, ‘Will you marry me?'”

As a spiritual director gave her encouragement, Raczka said her call came not from literally hearing a voice, but from hearing something in her heart, her thoughts and her prayers.

In addition to the inner call, discerners also receive outside confirmation of that call from others.

“Someone from the outside has to tell you that we are seeing stuff that you need to consider,” Father Horan said.

When he first heard in his heart that he was being called to the priesthood, Father Jeffrey Tunnicliff, parochial vicar at St. Mary Southside Parish in Elmira, said he remembers thinking, “This is nuts.”

Father Tunnicliff, who was ordained in 2007, noted that the story of his call is not the traditional story of years past, when young men went to high school and then college seminaries, then straight into the priesthood. A child of divorced parents, he had worked as an engineer and had lapsed in his Catholic faith, returning to the church only two years before he began to discern a call to priesthood. Eventually he began to see that his unique background helps him relate to others, including those in families affected by divorce.

He noted that he’s not alone in taking his time in entering the priesthood.

“Most of the guys from the past few years for Rochester have been guys who had been out working, and (the priesthood) was a second career,” said Father Tunnicliff, who maintains a Web site about vocational journeys at www.renewaloffaith.org.

Dady noted that some seminarians approach the diocese as early as junior high school, while others spend several years working in professions before realizing they are being called to the priesthood. Recent seminarians have come from all walks of life and professions, including teachers, musicians, finance professionals and chemists, she said.

People today average seven career changes in their lifetime, but Father Horan noted that a priestly vocation is intended to be a lifelong commitment.

“This is something that’s begun by God,” he said. “It’s not a career. It’s not your best guess as to how to use the talents you were given.”

There is no typical seminarian, but an active prayer and sacramental life are two hallmarks, Dady said. Candidates also must be physically and mentally healthy and have a strong desire to serve, she added.

“The candidates are all very different,” she said. “We are looking for someone who has developed, or is developing, a close relationship with Jesus.”

“Many of them have had, I think, a personal experience of Christ that has awakened them to Christ’s presence in their life, and that has led them to live a life of giving back to God,” Father Horan said.

“If you are someone that may be considering the priesthood, it’s important to talk to someone about it, whether it’s a pastor or a spiritual director,” Dady said. “Tell someone what you are thinking.”