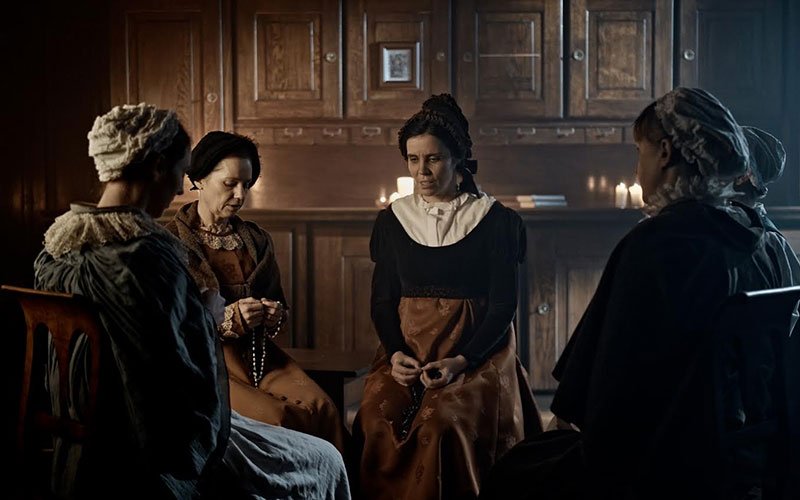 NEW YORK – The life, work and legacy of the principal founder of the Society for the Propagation of the Faith is celebrated in the engaging documentary “Heart of a Missionary: The Story of Pauline Jaricot.” Using interviews, dramatized scenes and a globetrotting survey of the current activities of the Society, filmmaker Tim Moriarty makes a strong case for the lasting impact of Jaricot’s apostolate.

Born in 1799 – as the rise of Napoleon was about to curb the excesses of the French Revolution, including its attacks on the Catholic Church – Jaricot was raised in Lyon by parents who were both prosperous and pious. Though she was tempted by bourgeois worldliness, the youthful Jaricot’s faith was deepened by an accident that almost claimed her life and required a long convalescence.

Her initial foundation was a union of prayer among female factory workers aimed at making devout reparation to the Sacred Heart. Out of this grew organized intercessions on behalf of – as well as small-scale but eventually bountiful fundraising for – the spread of worldwide evangelization.

Jaricot’s recognition of the role the laity could play in broadening the reach of the Gospel anticipated, in a significant way, one of the major themes of the Second Vatican Council. Among the clergymen with whom she cooperated was her beloved brother Philéas, a would-be missionary barred from traveling abroad by ill-health.

Jaricot’s other activities, as touched on in the movie, included establishing the Living Rosary Association, membership of which exceeded 2 million in France alone at the time of her death. Her attempt to create a model factory – one in which industrial laborers would be well-treated, appropriately paid and allowed time for leisure and prayer – ended in disastrous failure, however.

Swindled by those to whom she had entrusted the funds for the project, which constituted her entire fortune, Jaricot was forced into bankruptcy and treated as a disgrace by Lyon’s previously receptive middle class. She died penniless in 1862.

Yet that was hardly the end of her influence. As Moriarty’s script reminds us, the United States was considered mission territory until the early years of the 20th century, and the Society was vital to the growth of the American church, particularly in the South.

Prominent among the host of Jaricot’s heirs, moreover, was Archbishop Fulton J. Sheen, author, radio and television personality as well as national director of the Society from 1950 to 1966.

Archbishop Sheen’s current successor, Monsignor Kieran Harrington, appears on screen to celebrate Jaricot’s accomplishments. So, too, do Cardinal Luis Antonio Tagle and Archbishop Giampietro Dal Toso, both of whom serve in the Vatican’s Dicastery for Evangelization.

Jaricot was declared venerable in 1963. She was beatified May 22.

While unlikely to interest small children, “Heart of a Missionary” is suitable for all ages and will make inspirational viewing, whether screened in a home setting or used as a catechetical tool for groups. It can be watched for free online, in English or Spanish, at: blessedpauline.org.