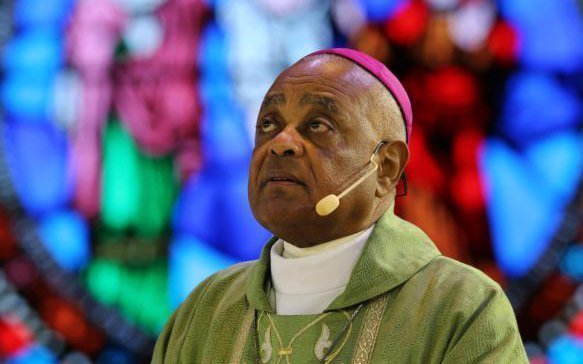 “On behalf of the clergy, religious and lay faithful of the Archdiocese of Baltimore, I extend heartfelt best wishes and prayers to Archbishop Wilton Gregory on his appointment as the next archbishop of Washington. Our two local churches enjoy a uniquely collegial history that has advanced our shared mission of spreading the Gospel of Jesus Christ throughout the state of Maryland. I look forward to working alongside Archbishop Gregory in proclaiming the Gospel and building up the body of Christ in the years ahead.” — Baltimore Archbishop William E. Lori. (Territory covered by the Washington Archdiocese includes five Maryland counties and the District of Columbia.)

“I congratulate and assure Archbishop Wilton D. Gregory of my prayers as he becomes archbishop of Washington. Archbishop Gregory has exemplified the role of bishop as a shepherd in the Diocese of Bellville, Illinois, and Archdiocese of Atlanta. As president of the U.S. Conference of Catholic Bishops from 2001-2004, he led the process in addressing the clergy sexual abuse crisis in the United States. That process resulted in the adoption and implementation of ‘The Charter for the Protection of Children and Young Adults’ in 2002. Archbishop Gregory’s recognition and understanding of the abundant gifts found in the diverse Catholic community will serve the Archdiocese of Washington well. I continue to keep him and the people of the archdiocese in my prayers.” — Bishop Barry C. Knestout of Richmond, Virginia. (Prior to his appointment to Richmond in 2017, Bishop Knestout was an auxiliary bishop of the Archdiocese of Washington.)

“With great pride, the church in Chicago rejoices in the appointment of our native son, Archbishop Wilton Gregory, as the seventh archbishop of Washington. Known to us, and especially his brother priests in this local church, as a proven pastor and devoted friend, we offer Archbishop Gregory our heartfelt congratulations and warmest best wishes. We look forward to his continuing service to the people of God as he begins his new ministry in our nation’s capital.” — Archdiocese of Chicago. (Archbishop Gregory was ordained a priest of the Chicago Archdiocese May 9, 1973; he was a Chicago auxiliary bishop from 1983 to 1993.)

“(Archbishop Gregory) brings many gifts and valuable experience to the nation’s capital, where he will serve as a shepherd to a church in crisis. … I look forward to cooperating with him on efforts that seek to combat the evil of sexual abuse and to contribute to the renewal and rebuilding of the church. For the past 14 years, (the archbishop) has served as a member of the board of trustees, and now a fellow, of Catholic University. Over the years I have known him to be a true servant of the church, and to live out his episcopal motto, ‘We are the Lord’s.’ I am confident he will continue to serve well Catholic University as chancellor. … I want to express the university’s gratitude to Cardinal Donald Wuerl (retired archbishop of Washington) for his many years of dedicated service to Catholic University. … His relationship with us has been characterized by generous service, loyalty and fidelity to our mission.” — John Garvey, president of The Catholic University of America in Washington.

“The appointment of Wilton Gregory as archbishop of Washington is significant considering that the Washington metro area is the heart of black Catholic history in the United States. I think that his appointment represents a long overdue recognition of the fact that there are millions of Catholics of African descent who yearn to see themselves represented in the church’s leadership. (His) appointment on April 4 (the 51st anniversary of the assassination of the Rev. Martin Luther King Jr.) is a poignant reminder of the history of racial violence against African Americans, who organized among faith communities, and demanded the nation take responsibility for its deep investment in maintaining white supremacy. I hope Archbishop Gregory’s move from Atlanta to Washington will be the first step in helping American Catholics initiate racial justice work within their parishes and schools.” — Marcia Chatelain, associate professor of history and African American studies at Georgetown University in Washington.

“Archbishop Gregory is a caring, faithful, strong and smart leader at a time when Washington needs all these qualities. He listens and learns. He speaks up for the unborn, undocumented, poor and vulnerable. He embraces Pope Francis’ mission and message. An Africana American archbishop in the nation’s capital is a powerful sign of hope in the face of racial divisions and injustice in our nation and in a city, region, and diocese with a vibrant African American community. No one has done enough on clerical sexual abuse, but Archbishop Gregory showed determination and commitment in leading the effort to adopt the Dallas charter, zero tolerance and lay review boards in 2002. Washington is both a demoralized diocese and a vital and diverse local church. Archbishop Gregory is a pastor who can help us deal with our hurt and anger and a leader who can help renew our sense of mission. He offers a promising new beginning after a terrible time.” — John Carr, director of the Initiative on Catholic Social Thought and Public Life at Georgetown University.