Heaven Is for Real - Catholic Courier 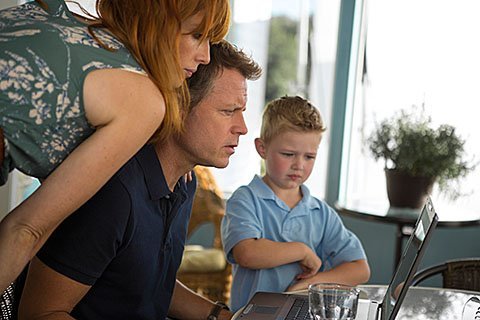 Kelly Reilly, Greg Kinnear and Connor Corum star in a scene from the movie "Heaven Is For Real." The Catholic News Service classification is A-I -- general patronage. The Motion Picture Association of America rating is PG -- parental guidance suggested. Some material may not be suitable for children.

NEW YORK (CNS) — "Out of the mouth of babes and sucklings hast thou ordained strength." Those familiar words, addressed to God in Psalm 8 of the King James Bible, might serve as the tagline for the fact-based drama "Heaven Is for Real" (TriStar).

Audiences of almost any age will benefit from this intriguing, child-guided glimpse into the afterlife.

As readers of Todd Burpo’s best-selling book (written with Lynn Vincent) will know, this is the story of his young son, Colton. After coming close to death during an operation, the 4-year-old (Connor Corum) startled his Wesleyan minister father (Greg Kinnear) and choir-director mother, Sonja (Kelly Reilly), by announcing that he had visited heaven and met Jesus.

His subsequent description of two deceased relatives, the existence of one of whom was previously unknown to him, lent remarkable credibility to the lad’s claim.

Perhaps because they seemed too literal to be readily accepted, however, Colton’s matter-of-fact statements about paradise stirred controversy in his family’s small-town community of Imperial, Neb. Ironically, they also provoked a crisis of faith for Todd, who was forced to ask himself how genuinely he believed what he had long been preaching.

Director and co-writer (with Christopher Parker) Randall Wallace’s adaptation of Burpo’s account is substantial and moving, thanks in large part to the mature way in which it grapples with fundamental issues of religious belief — and doubt. What could have been a hokey, feel-good exercise in Christian cheerleading instead comes across as a sober, though far from humorless, meditation on the reality of death and the virtue of hope.

Those themes are ably personified by Margo Martindale in the role of Burpo family friend Nancy Rawling. A stalwart member of Todd’s congregation, Nancy nonetheless suffers deep, ongoing grief over the loss in combat of her Marine son.

Along with its faith-affirming revelations about the beyond, "Heaven Is for Real" also showcases a tenacious marital bond. Beset by money troubles, illnesses and other worries, Todd and Sonja occasionally quarrel. Yet their underlying commitment to each other is unwavering.

Scenes portraying the medical difficulties the Burpos endure — including a painful baseball injury for Todd — might not be suitable for the littlest moviegoers. An unspoken innuendo between Todd and Sonja, however, will sail well over youngsters’ heads.

Viewers will particularly appreciate Colton’s takeaway from his celestial journey, a message so simple and liberating that those around him, including believers, were hesitant to accept it: Thanks to the existence of heaven he says, "We don’t ever have to be afraid."