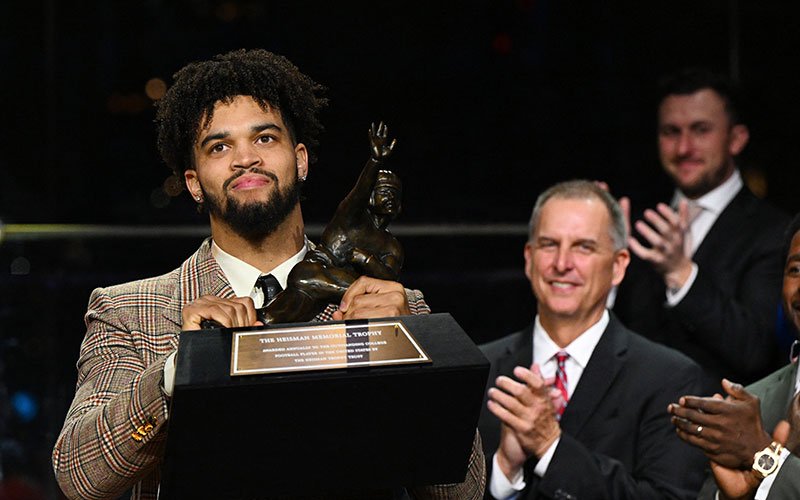 WASHINGTON (CNS) — Caleb Williams, the star quarterback at the University of Southern California who won the Heisman Trophy Dec. 10, earlier made his mark at two Washington-area Catholic schools he attended for middle school and high school.

“We love Caleb!” a group of purple-clad Gonzaga students chanted during a Heisman Trophy watch party at the Jesuit boys’ high school, with some of them jumping up and hugging each other after Williams had accepted his award.

Williams had just become the first Washington-area native to win the Heisman Trophy.

Four years earlier in November 2018, Williams, as Gonzaga’s sophomore quarterback, had lifted the Eagles to their first Washington Catholic Athletic Conference football title since 2002 with an improbable 46-43 win over DeMatha.

After a yearlong stay at the University of Oklahoma, where Williams led the Sooners to a come-from-behind win over archrival Texas, Williams transferred to USC. This season, he threw for more than 4,000 yards with a 66% pass completion rate, 37 touchdowns and only four interceptions in leading the Trojans to a No. 8 AP ranking and an 11-2 record.

During this, his first year at USC, he helped restore some of the glory to a Pac-12 program that had struggled to meet its formerly elite status after Coach Pete Carroll left in 2009 to lead the Seattle Seahawks.

Williams had transferred from Norman, Oklahoma, home of the Sooners, to USC in Los Angeles, after former OU coach Lincoln Riley took the top job at USC in 2021. The Heisman Trophy victory likely took away some of the pain of the Trojans’ 47-24 loss to Utah in the Pac-12 title game on Dec. 2, which cost USC a spot in the College Football Playoff.

Debbie Corradini, a resource teacher at St. Pius X Regional School, remembers Williams for his qualities off the gridiron from when he attended St. Pius in the seventh and eighth grade.

“We taught him, but in a lot of ways, he taught us (more) about being hardworking, kind and humble,” she told the Catholic Standard, Washington’s archdiocesan newspaper. “He was very well-mannered and kind to his peers.”

A 36-year veteran of the St. Pius X Regional School staff and the mother of four children, Corradini cried during the Heisman presentation, feeling proud of Williams.

She recalled Williams during his middle school years as “having the drive to be the very best at everything he did.”

He enjoyed other activities, such as biking, fishing and swimming, but ironically found relaxation in the rough and tumble contact sport of football, she recalled.

Focusing on football as a sport

Corradini remembered him overcoming doubts about whether he was big enough to be an effective quarterback.

During his middle school years, Williams decided to focus on football as a sport, and he and his father, Carl Williams, would venture out for 5:30 a.m. workouts at the Prince George’s Sports and Learning Complex in Landover, Maryland, not far from FedEx Field, the home stadium of the Washington Commanders.

“He has a great mom and dad,” Corradini said. “They did a great job keeping him humble.”

Even in middle school, Williams had set his sights on winning a Heisman Trophy and eventually becoming a professional football player, something she sometimes hears from young students, Corradini recalled.

Luke Casey, a fifth-grade teacher at St. Pius and an assistant football coach at DeMatha, helped privately coach Williams in the quarterback position, which requires a great deal of athleticism, leadership and mental dexterity.

In an interview with WTTG-TV Channel 5 after the Heisman Trophy award presentation, Randy Trivers, the football coach at Gonzaga, praised Williams’ athletic ability, saying: “He has exceptional arm talent … and exceptional foot speed. … he has the right amount of poise and confidence.”

Trivers paid tribute to Williams’ preparation for games as being part of what sets him apart from other quarterbacks.

Jesuit Father Joseph Lingan, who became president of Gonzaga in 2021, paid tribute to “Caleb’s leadership both on and off the field, his charitable nature, and his gracious and humble character,” in a statement the school released after the Heisman Trophy announcement.

“Caleb and his parents embraced all that Gonzaga has to offer,” the priest said. “He graduated as an integral community member who both contributed to and benefited from our extraordinary school.”

“On behalf of the entire Gonzaga community, congratulations Caleb! You will always be an Eagle! Continue to make us proud!” Father Lingan added.

Students at St. Pius are inspired by Williams’ success, and many of them got to meet the quarterback when he visited St. Pius about a year ago, Corradini said.

She admired the leadership Williams showed in speaking with many students and not boasting or bragging about his success.

“I want to be the next Caleb Williams,” one student told her.

Murray writes for the Catholic Standard, newspaper of the Archdiocese of Washington.