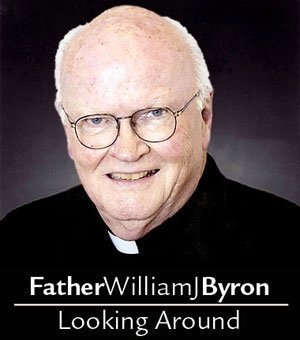 A journalist friend of mine, Susan FitzGerald, is coauthor with pediatrician Kenneth Ginsburg of a new book titled Letting Go With Love and Confidence (Avery Books, a division of Penguin). It promises help to parents in "raising responsible, resilient, self-sufficient teens in the 21st century."

Who wouldn’t be interested in knowing more about that?

As a celibate priest-educator who tells students that they can find me in "that home for unwed fathers known as the Jesuit Community on campus," I claim no experience in raising teenagers. But I’ve observed firsthand both success and failure on the part of parents trying to meet that awesome responsibility.

Paging through a prepublication copy of Letting Go, it struck me that this is a book to be read by parents of adolescents and discussed with other like-minded parents of children in the same age group.

I’ve often noticed that it is difficult for parents to determine where trust ends and neglect begins. They want to trust their offspring, but they surely don’t want to neglect them.

So, the understandable tendency is to yield on trust and tighten up on control, lest they be guilty of neglect.

This, of course, triggers resentment from the youngsters and widens the gap between them and their parents.

High schools typically have a mothers’ club and a fathers’ club, often charged with fundraising responsibilities sometimes organized around the activities of an athletic team. As such, it is not difficult for willing parents to find other parents who want to learn more about what works and what does not in the matter of successful parenting in the preteen and early teen years.

The trick is to make time for informed conversation, and Letting Go With Love and Confidence can help to inform the conversation.

Parenting is essentially about "providing the right mix of warmth, support, and monitoring so your child learns to manage his own life and make his own good decisions," the authors say.

They recommend authoritative (as opposed to authoritarian) parenting as the best way to combine the needed warmth, support and monitoring: "When adolescents are given clear boundaries and expect a reasonable amount of parental supervision, they are less likely to engage in worrisome behaviors, such as underage drinking and sexual activity, and more likely to do well in school."

The point of talking about all this with your spouse and other parents is to generate some collective wisdom as to what is reasonable in setting the boundaries.

Teenagers, according to Ginsburg and FitzGerald, are generally open to directives relating to safety and socially acceptable behavior. But, from the teenager’s point of view, judgments about their friends are not what they want to hear from their parents. The authors write: If you "make it clear that your concern is about safety, not about how you feel about your teen’s friends, your teen is more likely to accept that you’re not trying to control or punish him."

The book has a lot of practical tips. One I like is the "code word" a teen can use in calling home when caught in a bad situation: for example, at a party with underage drinking and a high probability that the police will show up soon.

Phone calls can easily be overheard, so "come and get me out of here" is not recommended. But if by prearrangement with the parent, the teen can say "I forgot to take out the dog" and the parent knows a pick-up is requested, a face-saving early exit is possible.