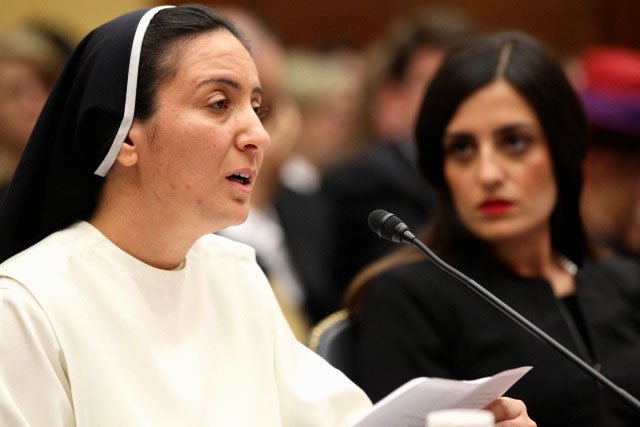 Sister Diana Momeka, a member of the Dominican Sisters of St. Catherine of Siena in Mosul, Iraq, testifies at a May 13 hearing on Capitol Hill in Washington titled “Ancient Communities Under Attack: ISIS’s War on Religious Minorities.”

WASHINGTON (CNS) — Speaking quietly and deliberately, Dominican Sister Diana Momeka from Iraq urged a congressional committee hearing May 13 to help the displaced Christian refugees in Iraq to "go back home."

During the hearing: "Ancient Communities Under Attack: ISIS’s War on Religious Minorities," Sister Diana was one of four women who spoke of the urgent need to not only help and protect religious minorities but also to preserve and save religious sites.

Recounting her own experience, Sister Diana said a bomb exploded at the sisters’ convent in Mosul in 2009. The sisters were unharmed but forced to move to Qaraqosh in Iraq’s Nineveh Plain. Last year the Islamic State, known as ISIS, invaded that region forcing the sisters to flee once again.

She said ISIS told Christians they either had to convert to Islam, pay a tribute to ISIS or leave with "nothing more than the clothes on their back."

In her case, she left only with her habit and her purse, which fortunately had her passport. Other sisters, she said, were not able to get their important papers before the forced evacuation.

The Dominican sisters joined more than 120,000 people displaced and homeless in the Kurdistan region of Iraq. She told the House committee members that this uprooting and theft of "everything that the Christians owned, displaced them body and soul, stripping away their humanity and dignity."

Reading from her prepared text, the sister told the members of Congress and those seated in the hearing room: "ISIS’ plan is to evacuate the land of Christians and wipe the earth clean of any evidence that we ever existed."

"This is cultural and human genocide," she said, adding that the loss of the Christian community has "placed the whole region on the edge of a terrible catastrophe. Christians have for centuries been the bridge that connects Eastern and Western cultures. Destroying this bridge will leave an isolated, inculturated conflict zone emptied of cultural and religious diversity."

She said the first priority is to help Iraqi Christians return to their homes by freeing the region from ISIS control. Next, there will need to be major rebuilding effort to restore roads, water, electricity and buildings including churches and monasteries.

When a member of Congress asked about other needs, Sister Diana stressed the urgency for psychological help for the religious minority refugees.

"We don’t have strong programs," she said, noting that a Yezidi woman who came to the sisters for help had been repeatedly raped by ISIS members and suffered from burns. "She can’t control herself when she tells her story," Sister Diana said, adding that the sisters are trying to find treatment for her.

She also told the committee that the people they work with have not lost faith through the ordeals they have experienced. "Our faith is increasing and making us stronger," she said.

"We were displaced yet the hand of God is still with us. In the midst of darkness we see God holding us," she said, calling it a "gift of the Holy Spirit giving us strength to stay in our country and have hope that someday we will go back home."

The sister said it was difficult for her to talk about the situation of Christians in Iraq.

"As a religious sister, I am not comfortable with the media and so much attention," she said. "But I am here and I am here to ask you, to implore you for the sake of our common humanity to help us. Stand with us as we, as Christians, have stood with all the people of the world and help us."