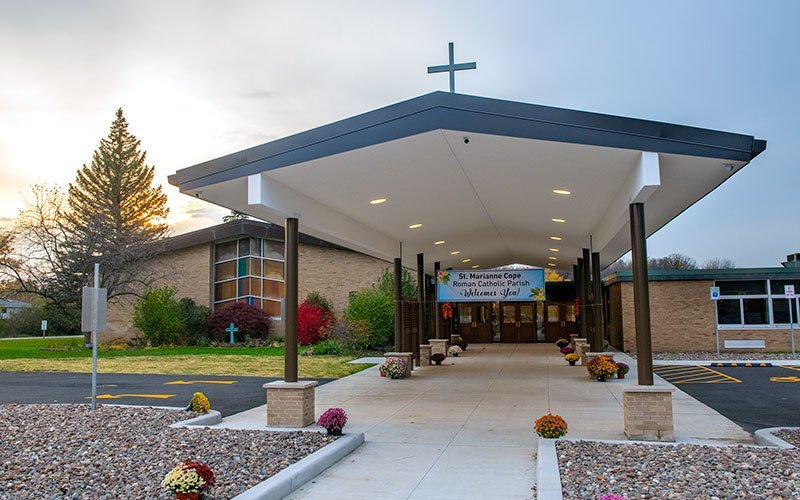 A new canopied entrance with a drop-off area is one of the new additions that is part of a renovation project at Guardian Angels Church in Henrietta. (Courier photo by Jeff Witherow)

HENRIETTA — The faithful at St. Marianne Cope Parish don’t even need to go inside Guardian Angels Church to sense that big changes have occurred there.

A new canopied entrance with a drop-off area is quickly noticeable upon arriving at Guardian Angels, located at 2061 E. Henrietta Road. In addition, the number of handicapped parking spots has been doubled.

Awaiting inside the building is an extensively renovated narthex, or gathering space. That area was bustling with activity during the late afternoon of Oct. 21, thanks to a well-attended walk-through event that gave parishioners their first chance to view the renovation effort up close.

“They just keep coming in and coming in. I’m amazed and delighted,” said Mercy Sister Sheila Stevenson, St. Marianne Cope Parish’s pastoral administrator, as she stood near the crowded entrance.

A few days later, on the weekend of Oct. 23-24, Masses returned to Guardian Angels for the first time since Easter Sunday as the renovation’s initial phase neared its conclusion. All of St. Marianne Cope’s liturgies over the previous several months had taken place at the parish’s other worship site, St. Joseph Church in Rush.

Among the renovation project’s features are:

• a completely redesigned narthex, with a floor made of non-slip porcelain;

• a reception desk in the narthex that will be staffed by volunteers;

• a large, new wood-carved statue of St. Marianne Cope, the parish’s patron saint, on the far side of the narthex;

• offices for parish administrators, staff and volunteers in the former Guardian Angels School;

Sister Stevenson praised all who were involved in the planning and completion of the project, which she said cost $1.2 million. It marks the first part of a renovation that also will include a second phase focusing on the church’s worship space. Sister Stevenson explained that the latter phase’s objective is to give the church a more traditional appearance, since the Guardian Angels facility was originally constructed as a gymnasium for the former school. She added that the start of the second phase will hinge on how fundraising efforts progress.

St. Marianne Cope Parish was created in 2012 and comprised Guardian Angels, St. Joseph and the former Good Shepherd Church in Henrietta. Good Shepherd was sold in 2019 to the Rush-Henrietta Central School District due chiefly to declining Mass attendance, decreased parish revenue and fewer available priests — trends affecting all parts of the Diocese of Rochester. Under an agreement with the school district, St. Marianne Cope Parish had continued using office space at the Good Shepherd campus until switching to its new offices at Guardian Angels effective Nov. 15.

A portion of the proceeds from the sale of Good Shepherd has gone toward the renovation of Guardian Angels. Sister Stevenson said that all renovation efforts are meant to emphasize the single parish community that is now St. Marianne Cope; she remarked that the walk-through on Oct. 21 was an encouraging sign of parishioners coming together. At the same time, she said, the parish intends to continue honoring the history of all three churches that originally constituted St. Marianne Cope’s parish community. For example, she pointed out a wall overlooking the reception area, on which individual drawings of Guardian Angels, St. Joseph and Good Shepherd churches surround a painting of St. Marianne Cope.

The parish is named after the renowned woman religious (1838-1918) who grew up in Utica and was a noted hospital administrator in Syracuse. In 1883, Sister Marianne Cope relocated to Hawaii, where she spent the rest of her life caring for people with leprosy. The Franciscan sister was beatified by Pope Benedict XVI in 2005 and canonized by him in 2012.