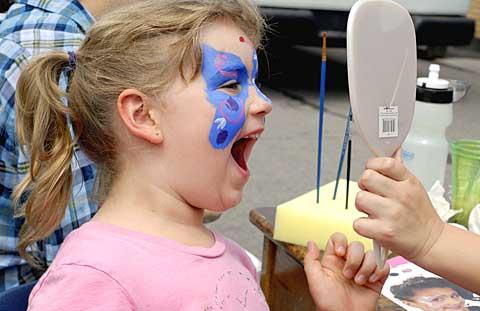 HENRIETTA — Ted Mooney recalled the day just over 50 years ago when he learned about a new parish in Henrietta.

"A lot of us were going to Good Shepherd and they called us in one day in the late ’50s, and said they were forming a new parish called Guardian Angels," he said, speaking at an anniversary picnic June 27 in the parish hall.

The event gave longtime parishioners like Mooney a chance to reminisce. He said parishioners who lived in Guardian Angels’ territory were at the time strongly encouraged to give the new parish a try. As a relatively recent arrival in Henrietta — Mooney moved there after serving in the U.S. Army from 1954-56 and then bought his home in Henrietta on the GI Bill — he decided to give it a try.

Yet before a new church could be built, the parish searched for space to gather. It first met in the Carmelite Monastery on Jefferson Road, but quickly outgrew the space.

Next, parishioners brought their faith to the marketplace: the Genesee Valley Regional Market to be exact. On weekends, after the vendors had cleared out of the market, parishioners moved in, deployed a cleaning crew and set up their church in a stall.

Not long after, though, the parish built its home at 2061 E. Henrietta Road. Officials broke ground on the church and school in 1961 and the first Mass in the new church was in 1962. The parish also converted a century-old farmhouse into a convent for the sisters who staffed the parish school. Many parishioners helped with the construction of the church, Mooney recalled. According to newspaper accounts, Good Shepherd School also housed the students of Guardian Angels while Guardian Angels School was being built.

Mooney noted that the parish was guided for much of its history by its first two pastors. Father John Kleintjes, who had been charged by Bishop James E. Kearney to start the new parish, served as pastor from 1960 to 1975. After that, Father Richard Hart was pastor from 1975 until his death at 64 in 1994.

Over the years, the parish and its leaders have been very caring, said Rose Rossi-Williams, a Henrietta resident who lives near the parish.

"Father (Albert) Delmonte and Father Hart came to my father’s funeral at St. Monica’s in the city," she said. "I turned around and there they were, sitting in the pew, and I thought, ‘Wow.’"

Donna Hennings described the parish as very friendly and accessible. One of her favorite memories is when she taught religious education to children who were going to be making their first Communion

"It was really special to see all the kids that year," she said.

The parish also has witnessed many transitions, including its students moving grade by grade from the Guardian Angels School to Good Shepherd School. The kindergarten classes were the last to leave in 1995.

The parish’s 50th year also is marked by transition, as it clusters with neighboring churches Good Shepherd and St. Joseph in Rush. All three parishes began a new Mass schedule in May that reduced the total Masses for the cluster from nine to six.

Swiecki, Guardian Angels’ pastoral administrator, noted that several people have commented on how nice it is to have full churches following the Mass-schedule change.

"People were reuniting friendships with people they haven’t seen in 20 years," she said.

She said the parish has been celebrating its 50th anniversary for several months, including a Mass with Bishop Matthew H. Clark and a dinner in October 2009, and with commemorative Christmas ornaments and pens.

The parish’s sense of hospitality sets it apart, Swiecki said.

"From the beginning parishioners had a real sense of community and an ownership of their community," she said.

That also was what drew the Bennett family to the parish when they moved to Henrietta about five years ago.

"It’s lively, and there are lots of kids, which is important to us," Suzanne Bennett said.