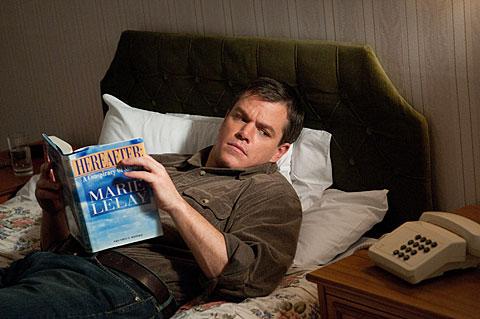 NEW YORK (CNS) — Director Clint Eastwood takes on one of life’s most essential questions in "Hereafter" (Warner Bros.). His ambitious drama charts the ultimately intersecting paths of three individuals all seeking enlightenment about what, if anything, follows for us after we die. But, while Eastwood manages to weave these initially disparate strands into an emotionally compelling tapestry, the result also is religiously problematic.

The first of the trio of plotlines follows Parisian TV journalist Marie LeLay (Cecile de France). While on vacation with her boyfriend, and producer, Didier (Thierry Neuvic) — a possibly still-married father of young children whose hotel bedroom she shares — Marie becomes a victim of the 2004 Indian Ocean tsunami, an event stunningly and frighteningly re-created here.

By the time she’s rescued, Marie has had a near-death experience that fundamentally shakes her purely secular worldview.
Across the globe in San Francisco, George Lonegan (Matt Damon) has abandoned his lucrative career as a medium in favor of a low-paying factory job.

George regards his ability to communicate with the dead — this supernatural endowment is given a quasi-natural explanation in a later scene — as a curse rather than a gift. So when he strikes up a romance with Bay Area newcomer Melanie (Bryce Dallas Howard), he does his best to prevent her from discovering it.
Set in a working-class public housing area of London, the third thread of the story concerns preteen twins Marcus and Jacob (George and Frankie McLaren). Deeply devoted to each other, and to their alcohol- and drug-addicted mother, Jackie (Lyndsey Marshal), the boys live in fear of being taken away by the authorities, and conspire quite effectively to conceal Jackie’s ongoing problems.
When an auto accident claims Jacob’s life, the devastated Marcus embarks on a quest to reconnect with his ever-protective, minutes-older sibling. Viewers are likely to feel the loss of Jacob almost as keenly as the characters onscreen, so skillful are Eastwood and the young McLarens in winning sympathetic engagement.

Peter Morgan’s script unhesitatingly affirms the existence of an afterlife, portrayed in several brief scenes as a light-filled but strangely cold and limbolike state. This in itself is no small risk since — as Marie discovers when she writes a book about her newfound belief in immortality — the bare assertion of such an idea in supposedly sophisticated circle seems to invite ridicule.

But, on all related topics, the film goes well beyond mere nondenominationalism, insistently steering clear of any specific beliefs. Even the existence of God is left a matter of ambiguity.

Issues of morality and the eternal consequences of earthly actions are also skirted, the vague implication being that all human beings end up in the same condition after death. Marcus implicitly rejects the message of an online preacher’s YouTube video proclaiming salvation through belief in Jesus. And the context equates the minister’s ideas with those of an imam who’s gone online.

As for the exercise of George’s unique power, it is shown to have as many negative as positive effects. Still, it’s not clear how his behavior can be reconciled with the Scripture-based Christian duty to shun occult practices.

The film contains complex religious issues, an alcoholism and drug-addiction theme, fleeting upper female nudity, a nonmarital, possibly adulterous situation and at least one rough and a few crude terms. The Catholic News Service classification is A-III — adults. The Motion Picture Association of America rating is PG-13 — parents strongly cautioned. Some material may be inappropriate for children under 13.