Here's what Catholics can expect from the next Congress - Catholic Courier 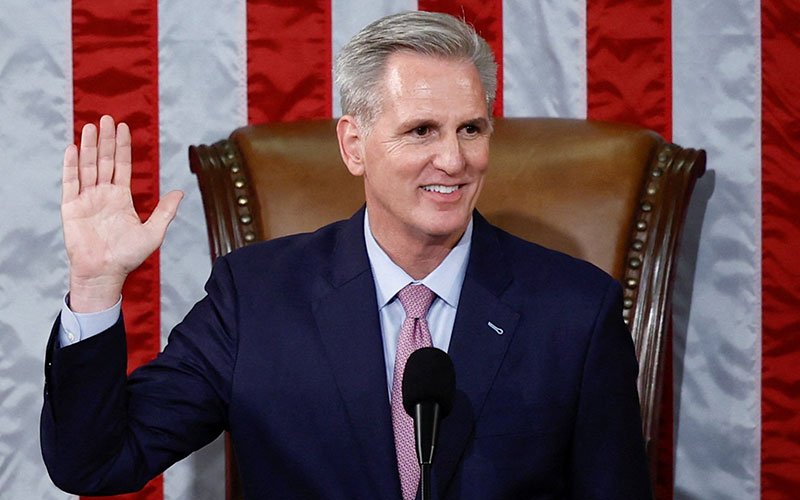 Rep. Kevin McCarthy, R-Calif., is sworn into office after being elected the next Speaker of the U.S. House of Representatives in a late night 15th round of voting into the fifth day of the 118th Congress at the U.S. Capitol in Washington Jan. 7, 2023. (OSV News photo by Evelyn Hockstein/Reuters)

WASHINGTON (OSV News) — Rep. Kevin McCarthy, R-Calif., was elected Speaker of the House Jan. 7 after a tumultuous process that stretched across the first week of the new term. The 118th Congress began in Washington, D.C., on Jan. 3, and will continue for the two remaining years of President Joe Biden’s current term in the White House.

The new Congress will likely be marked by significant partisanship, as Republicans take control of the House for the first time in Biden’s presidency, leaving him with a divided government for the rest of his current term.

The 2024 presidential campaign will also begin in earnest, which may increase the potential for partisanship as Republicans attempt to win the White House. Biden, a Catholic Democrat, has indicated he intends to seek reelection, while former President Donald Trump has already announced a third bid for the White House as a Republican, although he will face a primary contest with other Republicans for his party’s nomination.

The lengthy speakership battle is also a prelude to divisions within the Republican conference. The delay in his election resulted in McCarthy making a number of key concessions to garner enough votes from his conference for the office. McCarthy’s Republican opponents sought commitments from him on some of their preferred rules or legislation, most notably a House rule that would allow just one lawmaker to make a motion to “vacate the chair,” or a vote to oust the speaker. McCarthy had resisted that effort — which contributed to the retirement of Catholic and former Republican House Speaker John Boehner of Ohio — in early negotiations.

According to the House Historian’s office, the 15 ballot rounds McCarthy needed to be elected speaker were more than any U.S. House speaker since 1859, when Republican William Pennington of New Jersey was elected on the 44th round.

During its tenure, the next Congress and its speaker are also likely to offer a mixed bag of legislative results on issues of importance to Catholics. Some of those issues, including abortion and immigration, are cornerstones of increasingly partisan national debates.

Matthew Green, a professor of politics at The Catholic University of America in Washington who studies Congress and American elections, told OSV News in an interview that Republicans and Democrats have “less incentive to compromise on abortion,” than previous decades as both parties develop more firm positions on the issue. In the past, pro-life Democrats, for example, were more plentiful in Congress.

“You can’t you can’t build a cross-party coalition on abortion like you used to be able to 20, 30 years ago,” Green said.

In an Oct. 26, 2022, letter to members of both the House and Senate, U.S. bishops’ conference chairmen called for the next Congress to consider legislation that fosters “an authentically life-affirming society that prioritizes the well-being of families.” They identified areas including “radical solidarity” with mothers and infants, environmental and economic policies that support families, and policies that “recognize the central role of immigrant families within our society.”

“We implore you to work together to find bipartisan solutions and ensure that these and other similar legislative proposals are given high priority,” the bishops wrote. “We hope with a particular concern that we all can agree on coming to the aid of pregnant and single parenting women in need, so that they will have the support, comfort, and hope that they require to build their lives for the better and realize their aspirations.”

Two of the bills backed by the bishops conference passed in the omnibus bill enacted Dec. 29 in the twilight of the last Congress: the Pregnant Workers Fairness Act, a bill that prohibits employment practices that discriminate against making reasonable accommodations for pregnancy, and the PUMP for Nursing Mothers Act, a bill requires employers to provide reasonable break time for nursing mother employees to pump breast milk.

The issue of abortion

On the issue of abortion, a Republican House will likely stymie Democratic efforts to pass legislation to vastly increase abortion access, such as the Women’s Health Protection Act, which would have blocked most state-level abortion restrictions. Even if Democrats had maintained their control of the House in the midterm elections, that bill failed in the Democratically-controlled Senate last year, where it did not secure the requisite 60 votes to overcome the upper chamber’s filibuster rule.

Marilyn Musgrave, the vice president of government affairs at Susan B. Anthony Pro-Life America and a former representative from Colorado, told OSV News in an interview that “pro-lifers around this country can celebrate the fact that we now have divided government.”

Many of the pro-life movement’s immediate concerns, Musgrave said, such as the potential of ending the Senate filibuster or having the Women’s Health Protection Act signed into law are now extremely unlikely to come about during this Congress.

“Those threats are gone now,” she said.

Watching congressional action on a host of topics

Anthony J. Granado, the vice president of government relations for Catholic Charities USA, told OSV News that the organization is watching congressional action on a host of topics, including ensuring the inclusion of the Hyde and Helms amendments to prevent the use of taxpayer funds for abortion, immigration, the expired child tax credit expansion, and programs to provide resources for people who experience homelessness or underemployment, especially if there were to be a recession.

During last year’s midterm election cycle, some Republican candidates adopted extreme language about immigration, while many others argued a large increase of migrants trying to cross the U.S.-Mexico border was a failure of the Biden administration.

Immigration reform has long evaded bipartisan negotiators, and a last-ditch effort by Democrats to do so in the lame-duck session between the midterm elections in November and the end of the 117th Congress failed. With a growing number of House Republicans increasingly opposed to those efforts, immigration reform will likely continue to languish in the next Congress.

“I don’t see much promise for a comprehensive immigration bill in the next Congress,” Green said, noting that the issue has become more politically polarizing.

“It has become an issue where the two sides see much more to gain by attacking each other than by actually trying to find a solution,” he said.

That Republican opposition was demonstrated by a handful of hardline Republican House lawmakers in December, who in a letter accused Catholic Charities USA of “violating federal law and regulation” in their humanitarian work on the U.S.-Mexico border and instructed them to “preserve all information related to any expenditures submitted for reimbursement from the federal government related to migrants encountered at the southern border.”

“These accusations are both fallacious and factually inaccurate,” the CCUSA statement said. “Our life-saving humanitarian work neither violates federal laws nor endangers communities.”

Asked about the letter from the lawmakers, Granado told OSV News, “We don’t decide who’s allowed into the country, but we will serve those who come to our doors because that’s what the gospel calls us to do.” Granado also called for bipartisan work on immigration policy.

Strategically, Green said, there may not be a great deal of incentive for compromise at all in the coming Congress on any number of issues, although compromise may come in surprising ways.

“Democrats feel like they did pretty well in this election, better than they should have, so why should they help Republicans?” he said. “And then Republicans, especially in the House, see this is finally a chance to push back against Biden and Democrats.”

One area where Green said lawmakers may find compromise is supporting Ukraine in fending off Russia’s invasion.

Despite some vocal opponents of spending money in Ukraine in the GOP, Green said, “I think that the majority of Republicans in the House and Senate agree with Democrats that Russia needs to be stopped and Ukraine needs to be helped in their war against Russia.”