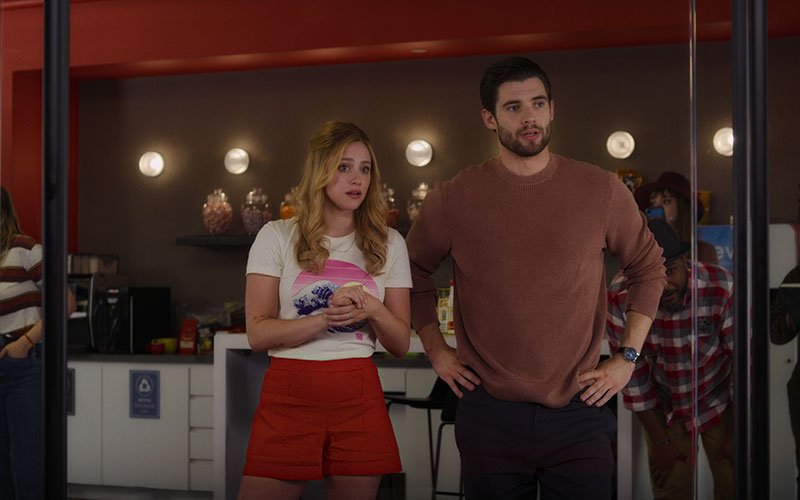 NEW YORK – Alternate destinies await the heroine of the pregnancy-themed romantic comedy “Look Both Ways” (Netflix). Despite its conformity to some misguided contemporary values, director Wanuri Kahiu’s film has a low-key charm viewers will likely appreciate.

After a casual encounter with her classmate and friend Gabe (Danny Ramirez), who is not a serious love interest, college senior Natalie Bennett (Lili Reinhart) fears she may be carrying a baby. As she awaits her test result, the plot divides into two parallel storylines.

In one, Natalie is, in fact, about to become a mother. So she moves back in with her initially annoyed but ultimately sympathetic parents, Tina (Andrea Savage) and Rick (Luke Wilson).

In the other, with no offspring on the way, Natalie and her best pal Cara (Aisha Dee) are free to follow through on their plans for the future. They move to Los Angeles where they share an apartment and where Natalie pursues her dream of becoming an animator. She also builds a relationship with her co-worker Jake (David Corenswet) whose real ambitions aim toward documentaries rather than cartoons.

But – if only because such a procedure would cut short one of the two scenarios being played out – Natalie quickly makes the right decision. Nor does the screenplay fall into the trap of portraying childbearing as some sort of disease.

Cara, we eventually discover, is a lesbian. Yet this fleeting plot point registers as just another necessary agenda item being fulfilled. There’s certainly no dwelling on the subject.

In both realities, Natalie is sometimes depressed but always resolute and creative in achieving her goals. And she consistently benefits from the support of those around her. To that degree, “Look Both Ways” sends a message about facing challenges and overcoming adversity that believers will welcome.

Look for: A celebration of the power of determination and human solidarity. Look out for: Scenes of sensuality, offscreen casual and premarital sexual activity, an incidental gay relationship, a same-sex kiss, drug use, references to cohabitation and contraception, at least one rough term, several crude expressions and numerous mild oaths. The Catholic Moviegoer’s guidance is M – suitable for mature viewers. Not rated by the Motion Picture Association.