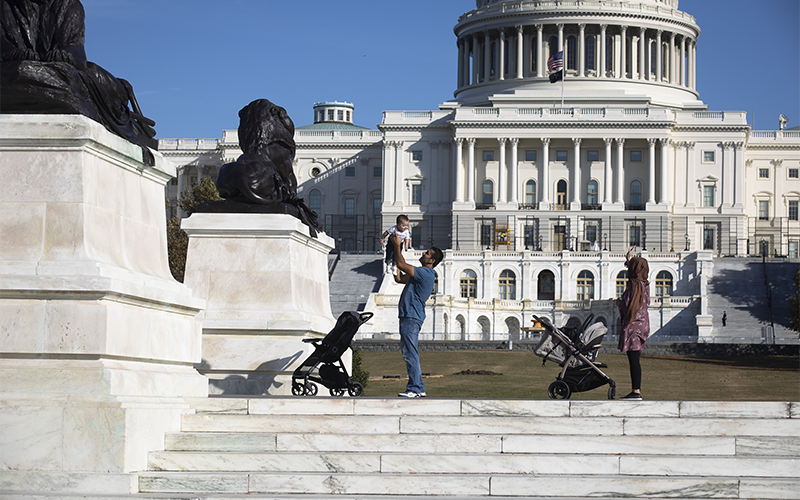 A family is seen near the U.S. Capitol in Washington Nov. 18, 2021. The Biden administration and the Department of Health and Human Services announced Nov. 18 the reversal of a Trump-era HHS rules change that ensured faith-based adoption and foster care agencies would not be excluded from federal funding for providing services consistent with their religious beliefs. (CNS photo by Tyler Orsburn)

Opponents of the rule modification, put in place early this year in the waning days of President Donald Trump’s term, said it allowed agencies to use religion to discriminate against potential foster parents.

But U.S. bishops praised the rule when it was implemented, saying it allowed faith-based social service providers “to continue partnering with the government to assist children in need.”

In acting on the rule, HHS specifically rescinded waivers that allowed child welfare agencies in South Carolina, Texas and Michigan to not place children with same-sex couples in accordance with their religious belief in traditional marriage between one man and one woman.

HHS Secretary Xavier Becerra said the Trump-era rule was “a blanket use of religious exemptions against any person or blank checks to allow discrimination against any persons, importantly including LGBTQ+ persons in taxpayer-funded programs.”

It is not clear how his decision will square with a unanimous decision handed down by the U.S. Supreme Court in Fulton v. Philadelphia over the same issue.

The court ruled in favor of a Catholic social service agency, saying it should not have been excluded from Philadelphia’s foster care program because, in following church teaching on marriage, the agency did not accept same-sex couples as foster parents in accord with church teaching.

The court said the city of Philadelphia’s anti-discrimination laws had put an unfair burden on Philadelphia’s Catholic Social Services; the city barred the Catholic agency in the Archdiocese of Philadelphia from placing any child in foster care or with an adoptive couple because the agency would not consider placements with same-sex couples.

Chief Justice John Roberts, who wrote the opinion, said the service agency “seeks only an accommodation that will allow it to continue serving the children of Philadelphia in a manner consistent with its religious beliefs; it does not seek to impose those beliefs on anyone else.”

He also said the city’s actions of excluding the agency burdened its “religious exercise” by giving the agency “the choice of curtailing its mission or approving relationships inconsistent with its beliefs.”