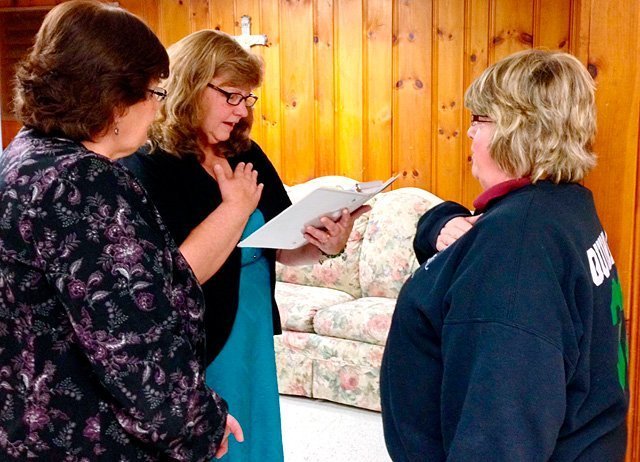 March 17 will be extra-special for a group of Southern Tier women who love their Catholic faith and Irish heritage.

This marks the first St. Patrick’s Day for the Ladies Ancient Order of Hibernians (LAOH), Daughters of Erin Chapter 1. Established in November 2014, it’s the first-ever female chapter of the national Hibernian order for Steuben County. It becomes the second women’s Hibernian group in the Southern Tier, taking its place alongside the Elmira LAOH that began in 1959.

Guided by the organization’s motto, "Friendship, Unity and Christian Charity," the LAOH convenes on the third Monday of each month at the Hornell Elks Lodge, 60 Broadway Mall, Hornell. The next meeting is March 16 at 7 p.m. Membership is open to practicing Roman Catholic women who are at least 16 years old, and are Irish by birth or descent or have a family connection to another LAOH member or the men’s Ancient Order of Hibernians.

Most LAOH members are parishioners of Our Lady of the Valley (St. Ann Church, Hornell/St. Mary, Rexville), but women also come from parishes in Almond, Alfred, Andover, Wellsville and Canaseraga in the Buffalo Diocese. The group is growing quickly, having drawn 21 women to its first meeting in November and an additional 15 new members at the December gathering.

Peggy Lynch, LAOH secretary, said many local women were inspired to launch such a group following the success of the AOH Sons of Ireland Division 1, which was founded in Steuben County in 2006.

"There is a large men’s organization here in Hornell and the ladies thought it was time to start our own club," Lynch said. She noted that an informational session took place last June at Hornell Country Club and was guided by Denise Sobus, immediate past president of the state LAOH and a member of the Auburn LAOH group. Sobus also attended the inaugural November meeting when officers were installed and members initiated.

The ladies have been quite busy of late. They were invited to attend the President’s Dinner of the men’s AOH Feb. 28, and will be on hand for that group’s Corporate Communion Mass and breakfast March 14 that precede the Hornell St. Patrick’s Day parade.

"We will have breakfast together before the parade and walk side by side down Main Street. We look forward to a day and night of camaraderie," Kuhn said. She and Lynch noted that the male Hibernians also have supported the women by paying for their sashes.

LAOH plans to take part in the annual Irish Fest in Hornell this coming August as well. In addition to event involvement, charity and service are priorities for the group, as evidenced by the canned-food collection it conducted for its December meeting, with donations forwarded to Catholic Charities Turning Point.

"I feel it is important to have a local chapter because it gives our area one more place to go to help people in need," Kuhn said, noting that the group strives to carry on the works of its patron saint, St. Brigid, while giving back to the community and its previous generations of Irish. She added that LAOH members also have discussed planting perennials and flowers this spring to spruce up some of the older historical buildings in Hornell.

"The Irish have had a big influence on the farming in our area and the Erie Railroad," Kuhn said, stating that the LAOH outreach efforts are "a way to honor our hard-working ancestors for their many sacrifices and hard work they’ve given to the development of this area."

"Hornell has a rich history of the Irish living and working in the city, and I myself came from a strong Irish family," added Lynch, who, like Kuhn, belongs to Our Lady of the Valley Parish. "It is great that there is an organization that carries on and promotes Irish history and tradition and the Catholic faith."

"We’ve waited a long time to get a chapter here in Hornell. Now that we finally have one, our Irish eyes are smiling. It will be a learning experience for all of us and a lot of fun," Kuhn said.

EDITOR’S NOTE: New members are welcome in the Ladies Ancient Order of Hibernians — Daughters of Erin Chapter 1. For details, contact Karen Kuhn at kkuhn40@yahoo.com or Peggy Lynch at irish2417@verizon.net; or visit www.ladiesaoh.com.