CHACAS, Peru (CNS) -- Freddy Cerna is about the same height as the statue he carves from Italian Carrara marble. His backward baseball cap and buggy protective goggles are a sharp contrast to the delicate face he perfects with his carving tools. The statue of Mary, her hands folded in prayer, stares back at him.

"I talk to her all the time," Cerna says. "I ask her to help me imagine a more beautiful and sweet face."

Cerna is one of about 650 artisans working across Peru for the Don Bosco cooperative. While many of the artisans build furniture, a handful of them specialize in sacred art. They build church pews and confessionals, create stained-glass windows and sculpt Jesus on the crucifix.

The artisans learn the craft in a free, five-year boarding school started in the Peruvian Andes in 1979 by Italian Salesian Father Ugo De Censi. It's part of the Operation Mato Grosso, an Italian nongovernmental organization that works to eradicate poverty in Peru, Brazil, Ecuador and Bolivia.

Italian volunteer and designer Mirko Codenotti says that when Father De Censi arrived in Chacas, he was stunned by the innate manual ability of the locals and saw training as a way to create job opportunities. 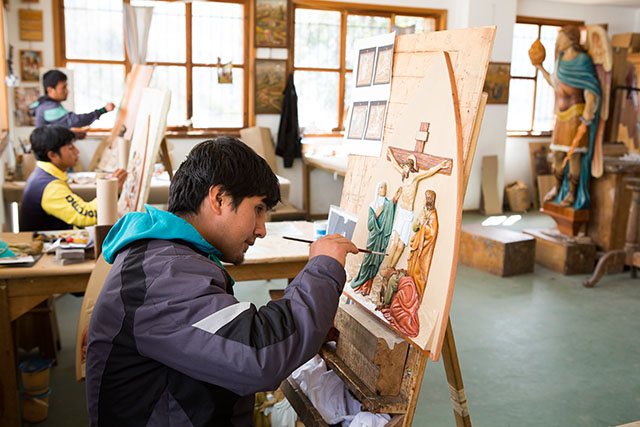 Yony Romero, pictured in late June, paints a wooden panel that will be installed as the stations of the cross at the congressional chapel in Lima, Peru. Romero works at the Don Bosco cooperative in Chacas, Peru.

Many of the boys that apply to the school live in extreme poverty. Some are orphans. About 25 students are admitted each year. The school offers them a core curriculum but also teaches them to paint and work with glass, wood, metal and stone. In the third year of the program, each student chooses his specialty. Upon graduation, the boys receive a box of tools and are invited to join the Don Bosco cooperative.

Cerna chose stonework as his specialty. He says it's the hardest and slowest to work with but it's worth it because the pieces last in time. Like Michelangelo, when Cerna looks at a giant block of stone, he says he sees a statue waiting to be discovered. He also sees his future.

Artisans at the cooperative earn according to the number of pieces they finish per month. The average artisan earns 1,200 soles (US$430) but a more experienced or skilled artisan can earn 2,000 soles. That amount is on par with what a teacher or a medical technician earns in the region.

Churches in Peru, Italy and the United States commission a majority of the sacred art, almost exclusively done by hand and usually in silence. 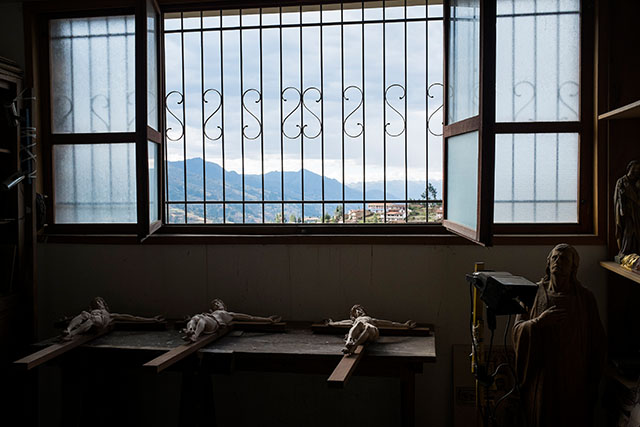 Sacred art made by artisans at the Don Bosco cooperative are seen in late June in Chacas, Peru. The cooperative was started in the 1970s by Italian Salesian Father Ugo De Censi to create job opportunities in the rural Andean town.

In 2010, Deacon Robert Holgren of Our Lady of Mount Carmel Parish in San Diego, California, was searching for a company to outfit the interior of the church the parish was building.

"So many companies were in it for the money, and there was no spirituality in it," he says.

When Deacon Holgren discovered the Don Bosco artisans, not only did he like the quality of their work but, in working with them, he believed he was feeding their spirituality.

In October 2013, Our Lady of Mount Carmel Church was inaugurated. Deacon Holgren says many wept at the beauty of the work.

"The altar looks as if God pulled it up straight from the ground," Deacon Holgren says.

A concrete pillar driven deep below the church's foundation supports the altar's 2,500-pound marble top. The 13-foot crucifix was carved from one block of wood and took three artisans eight months to complete. Deacon Holgren says he is still stunned by the intricacy in the crown of thorns. The baptismal font is a brilliant blue, hand fused from one piece of glass.

"Their work is an offering of love," Deacon Holgren says. "It's as if it were made by the hands of God." 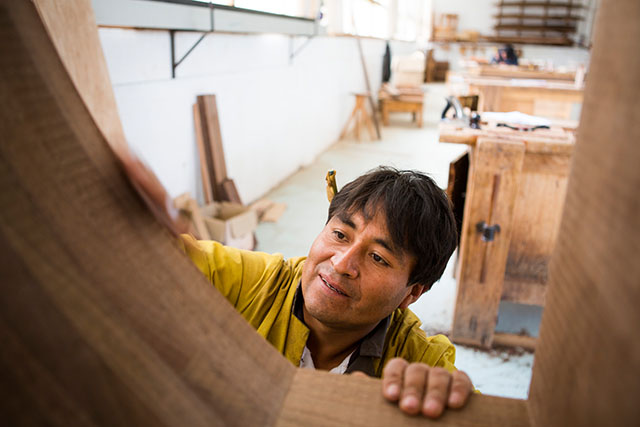 Zenon Aguirre constructs a uniquely designed bookshelf of solid wood at the Don Bosco cooperative in Chacas, Peru, in late June. The money from the sales of the furniture goes directly back to the artisans.

In addition to the San Diego church more than a dozen churches in Maryland have hired Don Bosco artisans. While the profit from sales goes directly back to the artisans, benefactors and hundreds of volunteers like Codenotti support the operational side of the mission. Master sculptors, painters and glassworkers often visit Peru to advise the artisans, sometimes staying for a few days, other times for decades.

Codenotti worked as an architect in Italy before moving to Chacas 10 years ago. He says that, as an architect, it felt strange to be picking specialty tile for a client's pool while knowing others in the world had so little.

Now he leads a simple life, humbled by the artisans he serves. Codenotti works mostly with sacred art and likes to think of his client as God. He says the work must be done with great responsibility, since the goal of the work is to give an image to what cannot be seen.

"Thousands of people come and kneel in front of this work, " Codenotti says. "It's bigger than us."

Copyright © 2014 Catholic News Service, Inc. All rights reserved. Linking is encouraged, but republishing or redistributing, including by framing or similar means, without the publisher's prior written permission is prohibited.