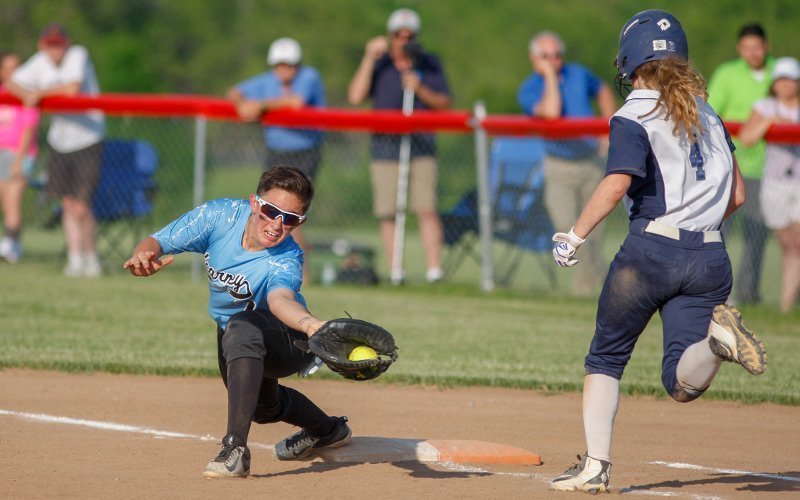 Bishop Kearney’s Christina Aldridge (1) reaches to make the catch for the out at first of Mynderse’s Jenni Page (4) in the top of the seventh inning of pay in the Sec V Class B Finals on May 30 in Canandaigua. Bishop Kearney won the title 6-2 to advance to the NYSPHSAA State playoffs. (Courier photo by John Haeger)

Sectional softball titles for Bishop Kearney and Our Lady of Mercy, a golf championship for McQuaid Jesuit, and runner-up finishes by four other teams highlighted a solid high-school spring sports season.

Mercy softball, which entered sectionals as a No. 7 seed with just an 8-10 record, strung together four victories in a row to take home the Section 5 Class A1 crown. The Monarchs scored a 7-o win over No. 5 Pittsford Mendon in the title game May 29.

Emily Phelan struck out 16 batters to lead top-seeded Bishop Kearney in its sectional title-game win over No. 3 Mynderse. The Kings benefited from a five-run second inning, highlighted by Mackenzie Emery’s two-run double.

Kearney’s path to the sectional final had begun with a 15-0 first-round win over No. 16 Bath May 23, followed by a 10-2 decision over No. 8 Greece Odyssey in quarterfinal play May 24 and a 3-2 win in nine innings over No. 5 Newark in semifinal action May 26. Emily Tytler scored BK teammate Nina Christoff with the deciding run against Newark, and Phelan recorded 15 strikeouts.

The Kings were stopped in their bid for a second consecutive Class B state title, falling 6-5 in eight innings to Olean of Section 6 in quarterfinal play June 2. BK surrendered three sixth-inning runs that tied the game at 5-5, followed by the game-ending run in the bottom of the eighth. Phelan drove in three runs to lead BK, as the team finished its season with a record of 21-2. Combined with their 25-2 mark during their state Class C championship season of 2017, the Kings now own a spectacular record of 46-4 over the past two years.

In a sectional-title game against Pittsford Mendon, Monarch pitcher Riley Maher turned in a four-hit shutout. She only recorded two strikeouts, but was bolstered by an array of defensive gems. Offensively, Mercy was led by Katelyn Vara and Danielle Salina, who each drove in two runs as the Monarchs prevailed for a second consecutive year against Mendon in the Class A1 final.

Mercy’s other sectional wins were 12-6 over No. 10 Greece Arcadia May 21 in the opening round, 1-0 in nine innings over No. 2 Brockport in a May 23 quarterfinal, and 4-3 over No. 3 Canandaigua May 25 in semifinal play. Lauren Gulick hit a two-run home run against Canandaigua, and Vara drove in the deciding run in the seventh inning.

Following its sectional title victory, Mercy earned an 11-0 win over Pittsford Sutherland in Class A state-qualifier play May 31, as Maher pitched the shutout and Gulick produced three hits and three runs batted in.

Mercy then fell in the state quarterfinals to Iroquois of Section 6, 4-1, in a June 2 game, as the Monarchs surrendered one run in the third inning, two in the fifth and one in the sixth before getting their only run in the seventh. Mercy ended its season with a 13-11 record.

The Knights won the Class A team sectional by shooting a combined total of 299, besting runner-up Brighton’s 309 total. All four McQuaid golfers recorded scores in the 70s at Wild Wood Country Club: Alex Zurat, with a 72; Dragon, 74; Mike Minnehan, 75; and Jack Bailey, 78.

McQuaid’s excellence at the team event took place six days after superb performances by three Knights at the sectional individual tournament. In that competition, Dragon fired a 72 to top the field at Penfield Country Club. Following closely behind, in second and third places, were McQuaid teammates Bailey with a 73 and Zurat with a 74.

Dragon went on tie for first at the state-qualifying Super Sectional event May 21 at Country Club of Rochester. He shot a 76 which, combined with his 72 at the May 21 sectionals, gave him a 148 total score. Dragon earned a spot in the state tournament along with McQuaid teammates Zurat (74-76—150, tied for third) and Bailey (73-80—153, tied for fifth), who also finished in the top nine and thus qualified for states.

At the state event June 3-4 at Cornell University, the Knights helped Section 5 successfully defend its state title. Bailey finished third overall with a total of 75-71—146, posting the best individual showing by a Section 5 golfer. Zurat tied for 10th place at 76-76—152.

‚Ä¢ McQuaid baseball finished as the runner-up in Section 5 Class AA. The second-seeded Knights began sectional play with an 8-4 quarterfinal victory over No. 7 Rush-Henrietta May 22 and went on to a 3-1 win over No. 3 Penfield in semifinal play May 24. They scored one run in the first inning and added two more in the third to back a solid pitching performance by Hunter Walsh. The Knights were eliminated with a 3-2 loss in eight innings to No. 1 Victor in the title game May 26, falling just short of successfully defending their 2017 Class AA title. McQuaid ended its season with a record of 16-7.

‚Ä¢ Elmira Notre Dame softball reached the title game of the Section 4 Class C playoffs despite beginning sectional play as a No. 6 seed. The Crusaders, who were the three-time defending sectional champs, started out with a 2-0 win over No. 11 Odessa-Montour in first-round play May 17, then won 6-3 over No. 3 Tioga in a May 23 quarterfinal game and 4-1 over No. 2 Union Springs in semifinal play May 24 behind pitcher Izzy Milazzo’s four-hitter. Notre Dame then fell to top-seeded Thomas A Edison, 1-0, in the title contest May 26, when the Crusaders were held to one hit. ND’s final record was 13-8.

‚Ä¢ Aquinas Institute boys’ lacrosse was another team making a sectional championship-game appearance from a No. 6 seed position. The Little Irish, competing in Section 5 Class D, won 17-5 over No. 3 Palmyra-Macedon in quarterfinal action May 23. They went on to a 16-7 victory over No. 2 Gananda in semifinal play May 26 behind a six-goal performance from Casey Hochheimer, with Jonathan Parrinello and Cameron Cecere scoring three goals each and Eli Chalmers adding two. AQ then fell short in the May 30 title contest, losing 8-6 to top-seeded Penn Yan despite nearly overcoming a 6-1 deficit.

‚Ä¢ Mercy girls’ track finished second in team scoring out of 11 schools at the Section 5 Class A championships May 26. The Monarchs were led by first-place finishes from Shannon Trevor in the 800-meter run, Mia Cavatassi in the long jump and Meredith McGee in the shot put as well as the 3,200-meter relay squad. At the Section 5 state qualifier June 1, Trevor recorded a first-place showing in the 1,500 meters in Division 1. That performance advanced Trevor to the state meet June 8-9, where she placed ninth in the 1,500 in the public-schools division.