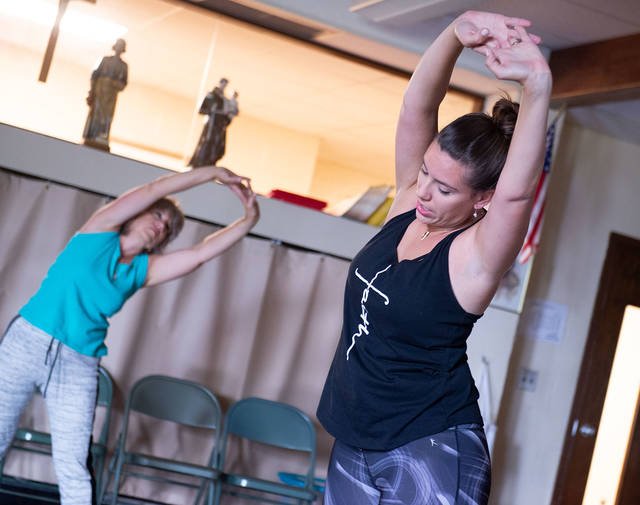 Kristen Muir leads a SoulCore class in the parish hall at St. Leo Church in Hilton Aug. 18. The core-strengthening workout centers around praying the rosary and reflecting on its virtues. (Courier photo by John Haeger)

St. Leo Church in Hilton is offering a way for parishioners to strengthen their bodies and souls at the same time.

Since the fall of 2018, parishioner Kristin Muir has been leading SoulCore classes at the church. The core-strengthening workout centers around praying the rosary and reflecting on its virtues. The program was created by Colleen Scariano and Deanne Miller, members of Our Lady of Mount Carmel Parish in Carmel, Ind.

Muir first heard about SoulCore in 2018 from her cousin. At the time, Muir had been concentrating on being healthier and exercising more.

“I was running a lot, and I started praying the rosary while I was running, just to get a two-for-one, since I am a busy mom,” Muir explained.

She began researching the SoulCore concept and learned that the only classes being offered in the upstate New York area at that time were in the Buffalo Diocese. She decided to attend a Buffalo-area class and was sold on the program.

“I loved it,” Muir said. “And my mom actually pushed me into it and said you have to bring this to Rochester.”

She decided she wanted to become a SoulCore leader, so she attended a two-day SoulCore discovery retreat in Florida in July of 2018 in preparation for becoming a certified instructor. During the retreat, she learned about the program’s spiritual elements and exercises. Afterward, Muir completed 60 days of discernment during which she made her consecration to Mary and practiced the exercises she would teach. Upon completing her discernment, Muir was required to submit a video to the SoulCore creators to demonstrate that she was capable of all the elements required to be certified as a SoulCore leader.

With the encouragement of her mother, Muir approached St. Leo with the idea of offering SoulCore classes at the church. St. Leo agreed, and classes began in September 2018 and take place at 8 a.m. on Saturdays in the parish hall.

According to Muir, her Saturday classes will have anywhere from four to 13 participants. Muir’s mother has attended almost every class and has been very supportive, she said.

SoulCore is intended for any fitness and spiritual level, and Muir noted it can even be done while pregnant.

“When I first started, I had just become pregnant, so I was able to do this my whole pregnancy. I led classes just up until four weeks before (giving birth),” she said.

The only real qualification for class participation is the ability to remain quiet for an hour, said Muir, noting that she has led a class with someone as young as 11 all the way up to someone in their 80s.

“I’ve had an 80-year-old come and sit in a chair and still be able to pray and do some of the movements from a chair,” she said.

The class is intended for anyone who desires interior peace or to grow in virtue, said Muir. The classes focus on the life of Jesus, praying the rosary and contemplating the fruits of all the mysteries.

Classes feature dim lighting, and lit candles and a large rosary are placed on the floor in the middle of the room. Participants place their mats in a circle around the rosary, lifting their open palms upward for a beginning stretch called the surrender position. During this time, Muir reads the Apostles’ Creed. She then recites the first part of the Our Father as participants transition into different exercises, with participants saying the second half of the Our Father internally.

“This way we can really connect the words of the prayers that we are saying and focus on breathing and really moving our bodies to connect ourselves with that prayer, intertwining the rosary with the prayers and movements of our bodies,” she said.

Muir leads the first half of all of the prayers, with the rest said internally by participants. Each 50- to 60-minute SoulCore session also includes reciting the Hail Mary and Glory Be, Scripture readings and meditations on the first decade of the rosary, all with a variety of alternating physical movements.